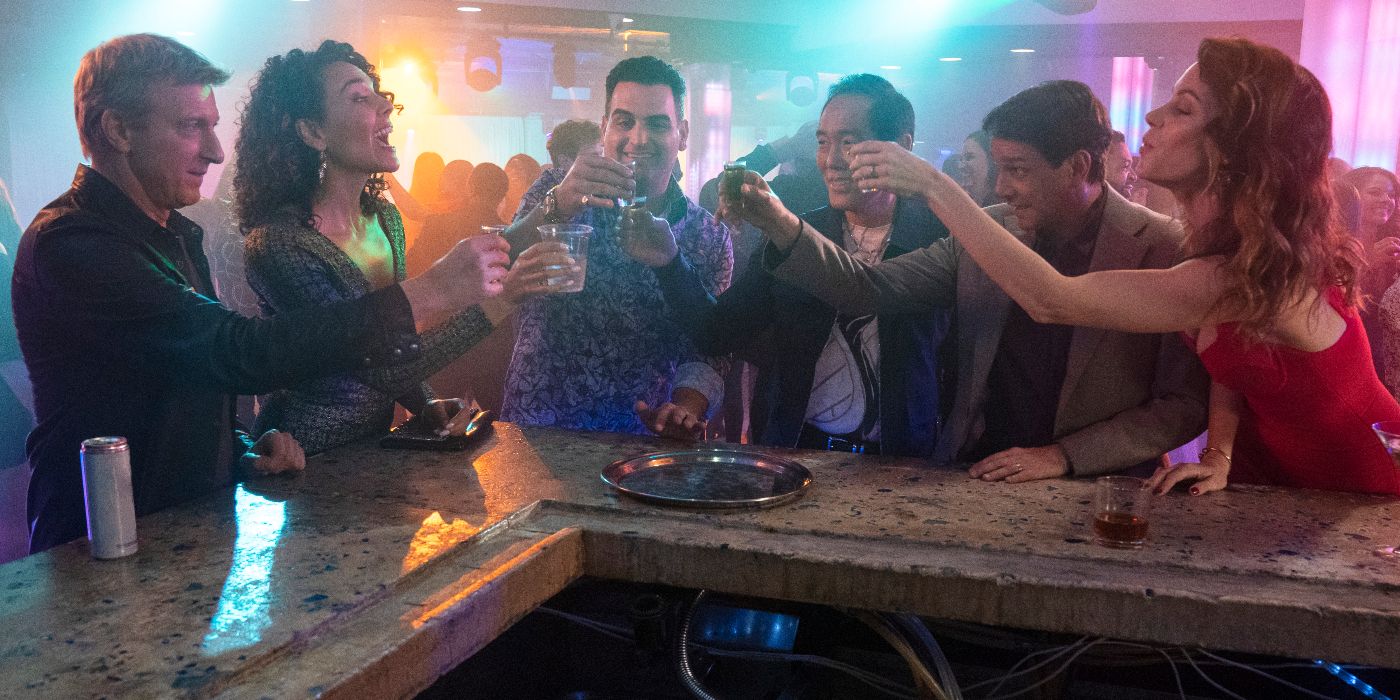 Cobra Kai Season 5’s penultimate episode, “Survivors,” starts with Miguel (Xolo Mariduena) searching for Sam, she caught him locking lips with another girl and is upset. A fight has drawn the crowd outsides – it’s Sam (Mary Mouser) and Tory (Peyton List). Tory is trying to talk Sam down, but Tory’s decision to keep quiet has caused suffering for the LaRusso family. Tory decides it was a mistake coming to see Sam and runs off into the night.

Proud parents Carmen (Vanessa Rubio) and Johnny (William Zabka) are getting a scan. The baby is healthy, so they can officially tell family and friends the good news. Once they reach the elevator, the doors open and Terry Silver (Thomas Ian Griffith) is there to greet both of them. They share a ride and a mishap from Johnny reveals the pregnancy to Silver. In speech-giving mode, Terry says everything he does is for the future while looking at Carmen’s bump, both theirs and his. Terry has the last word as he departs the elevator, telling them to savor every moment before it’s gone. Later, everyone reconvenes at the dealership and Johnny is recounting to Amanda (Courtney Henggeler) and Daniel (Ralph Macchio) how Terry appeared like some kind of terrible curse at the hospital. Could he have Miyagi-Do under surveillance? Chozen has checked the perimeter, but it’s all clear, and Daniel knows he won’t jeopardize his spot in the tournament. Johnny shares the news of his forthcoming bundle of joy and everyone is ecstatic, so they all agree to a night out.

Demetri (Gianni DeCenzo) is running his mouth about Silver’s rigging of the pre-fight, but Sam reminds the students of what happened when Daniel faced off against Silver. It was a bloodbath. They come up with a plan – maybe they can try and get Stingray (Paul Walter Hauser), but first they need to find out where he lives. Miguel tries explaining his cheating behavior, but Sam dismisses him coldly. Meanwhile, the Cobra Kai fighters are getting ready under the cruel tutelage of Kim Da-Eun (Alicia Hannah-Kim), who recognizes Tory for what she is: a liar. Silver is fuming over the stunt Miyagi-Do pulled; Kim compares them to mosquitoes and the next time they land, they will swat them. Just then, Robby saunters into Cobra Kai, apologizing for letting the members down and for turning his back on them. He should’ve taken everyone with him when he jumped ship because everything they learn from Silver is bullshit. Silver isn’t a sensei, he is their enemy. Robby’s words fall on deaf ears, while the perceptive Kim catches a longing look shared between Robby and Tory. The cat is out of the bag.

Amanda, Daniel, Johnny, Carmen, and Chozen barely retain their dignity getting out of a Hummer, which marks the beginning of their well-deserved night on the town. Will something go wrong? Chozen breaks the no-weapon policy by bringing sai knives, but the bouncer informs him he can get them back at closing time. They are dancing and having a good time, while Johnny is going sober to support Carmen. They all clink glasses, to the future. At his apartment, Stingray is playing an ’80s board game with some extras. They are all annoyed by Stingray’s constant bending of the rules when someone starts knocking on the door. It is Burt (Owen Morgan), and Stingray is happy to see him until the Miyagi-Do muscle sidles up to Burt. Stingray reiterates it all about Kreese, but the kids barge past him. He won’t lie to them.

Back at the nightclub, everyone, bar Johnny and Carmen, are getting wasted. Amanda and Carmen hit the dance floor, Daniel goes to the bar, Chozen drinks another Long Island iced tea, and Johnny is getting nostalgic. He can’t believe it all worked out so well, and he needed to stop looking backward. Losing the All Valley nearly destroyed him all those years ago. Chozen admits he has a special woman waiting back in Okinawa. Back at Cobra Kai, Terry Silver is cracking the whip. The students are dismissed, all except Tory. Kim Da-Eun has something special planned for the traitor: A statue made of solid stone. Tory is scared, she’ll break her hand. “It will heal in time for the tournament,” grins Kim. Tory begins hitting the stone until her hand is bloody and possibly broken, and Kim towers over her. “You act strong, inside you are weak,” she taunts, until Tory unleashes a final punch, shattering the stone. Tory lies on the ground in agony, while Kim retreats with a sly smile on her face.

Miyagi-Do is interrogating Stingray, and Sam appeals to Stingray’s better nature. Her dad was hurt, and more people will get caught in Silver’s crosshairs, and Stingray uses a Dungeons and Dragons-inspired scenario to tell the story of what happened between Kreese (Martin Kove), Silver, and him. He was almost killed and doesn’t want to lose the benefits, apartment, and all he has gained. Truthfully, he wanted to be a proud and noble warrior, just like Miyagi-Do, he wanted to belong, but he’s neither noble nor a warrior. He’s scared of Silver. Miguel follows Sam into the hallway, pleading with her to speak to him. Everything for Sam sucks, and she isn’t interested in an apology, but she isn’t happy seeing Miguel with someone else, and she’s entering a karate tournament. She mentioned a break from karate and Miguel. So why are they still off? If they’d known what they know now, lots of bad stuff might have been avoided. Sam blames Tory for it all. Miguel speaks up on Tory’s behalf. Yes, she could have spoken up sooner, but the face of the matter is, she did.

Back at the nightclub with the adults. Daniel and Johnny are speaking highly of Chozen at the bar when Carmen drags Johnny away. Chozen is drunk when Daniel goes back to their table. The subject of Kumiko is broached and Chozen is embarrassed Johnny mentioned it. Chozen was a disgrace in the village after his defeat and the only one who helped him was Kumiko. Daniel tells him to stop punishing himself for things that happened years ago. There is a truly cringe-worthy dance scene between the adults here. Oh, and a brawl breaks out. The women are tired, but the guys go on partying.

Sam shows up at Tory’s apartment, shocked by Tory’s injury and the place in disarray. Sam feels guilty, mostly because she didn’t know what Tory was going through. Maybe they can help each other? Sam fills Tory in on talking to Stingray, who basically told them Silver put him in the ICU. Tory had her suspicions all along. Sam is frustrated it can’t be proved until Tory has a lightbulb moment, but it happened at the old dojo, so maybe it still can. Meanwhile, Silver and Kim Da-Eun sit by an open fire and sip expensive liquor. Her team has exceeded Silver’s expectations and is welcome for as long as they want. Silver points out that Kim really broke down Tory at training, is he feeling guilty? But Kim has her eye on Devon Lee for Sekai Taikai; she can mold her into a weapon to make him proud. He is not sure, saying Devon is still green. “What if your enemies crush this?” asks Kim, sipping her martini. “I’m not going to let that happen,” Silver replies. Cut to the Hummer full of Daniel, Johnny, and Chozen. They are singing along to “Eye of the Tiger” and we just know something is waiting around the corner. It turns out someone has stolen the Hummer and is driving the men to an unknown location. They’re trapped!