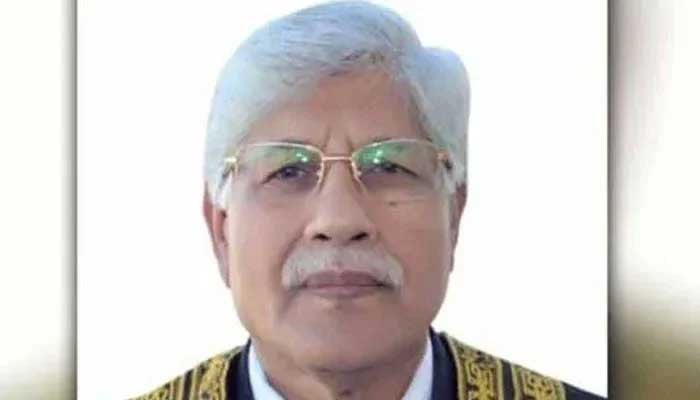 ISLAMABAD: Former Gilgit-Baltistan (GB) chief judge Rana Muhammad Shamim tendered an unconditional apology to the Islamabad High Court for the “wrong and unnecessary affidavit”, in which allegations of judicial manipulation were levelled against the former chief justice of Pakistan, Saqib Nisar.

In his fresh apology submitted on Friday, Rana Shamim solemnly affirmed, “I tender an unconditional apology for an affidavit which was neither correct nor required.”

He maintained that during his more than 30 years of professional life he has always respected both the bar and the bench and could never imagine intentionally scandalising or showing contempt to any judge.

“I regret rather apologize for an incorrect affidavit where the name of an honourable judge was mistakenly and unintentionally mentioned.”

Expressing his regret over the “grave mistake”, the judge said it should never have happened.

“The wrong and incorrect mention of a judge of this honourable court in the affidavit dated 10th Nov 2021 was due to my glaring misunderstanding and unintentional mistake,” said Shamim.

Withdrawing from the contents of the affidavit, the former judge, “I profusely apologize for the wrong and unnecessary affidavit.”

“I place myself at the mercy of this honourable court,” he added.

On January 20, the IHC formally indicted Rana Shamim in the case pertaining to the publication of his alleged affidavit.

Rana Shamim, however, submitted an unconditional written apology to the IHC in the contempt of court case filed against him.

Shamim stated that he was under extreme mental stress and was a “serious heart patient” aged 72 when he wrote down his affidavit “after approximately three long years” since the meeting that he mentioned above.

According to Shamim, this was why he fell “victim to a misunderstanding” and wrote the name Justice Aamir by mistake instead of “senior puisne judge” in the affidavit.

He said that he now “deeply regrets the grave mistake” that he inadvertently made and sought an unconditional apology for it.

On September 13, the IHC rejected the apology and gave him one week to submit response.

Rana Shamim had stated in a notarized affidavit that he was a witness to the then CJP Saqib Nisar’s direction to a high court judge not to release Nawaz Sharif and Maryam Nawaz on bail at any cost before the 2018 general elections.

“Mian Muhammad Nawaz Sharif and Maryam Nawaz Sharif must remain in jail until the general elections are over. On assurances from the other side, he (Saqib Nisar) became calm and happily demanded another cup of tea,” this is what is said in the affidavit of the former top judge of GB talking about the then top judge of Pakistan.

According to the document, Shamim’s statement was given under oath before the Oath Commissioner on November 10, 2021.

The affidavit, duly notarized, contains the signature of the ex-CJ of Gilgit Baltistan as well as an image of his CNIC card. The notary public stamped the affidavit and recorded that it was “sworn under oath Before me” on Nov 10, 2021.

However, former Chief Justice Saqib Nisar when approached categorically denied that he had ever directed any of his subordinate judges in connection with any judicial order whether it pertained to Nawaz Sharif, Shehbaz Sharif, Maryam Nawaz or anyone else.

Share
Facebook
Twitter
Pinterest
WhatsApp
Previous articleThree Days In Nashville, Tennessee – What To See And Do
Next articleLuart Officially Rebrands to Arcnes as The Platform Looks to Be More Than Just an NFT Marketplace