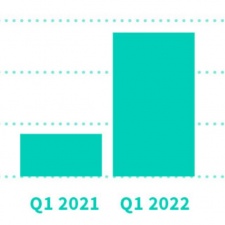 As an emerging subgenre of the hugely successful hyper-casual genre, the growth of arcade idle games has been especially noteworthy. Arcade traditionally infers that there’s either simple gameplay, or the gameplay is based on short runs, while the idle genre promotes retention through a twist on conventional gameplay.

The infographics outline that the Arcade Idle worldwide downloads in 2021, across both Apple’s iOS platform and Google’s Play Store, reached 47.3M during the year.

In a year when mobile game revenue decreased for the first time ever, arcade idle game downloads have instead continued to grow. Sensor Tower’s infographic has revealed a rise from fewer than 10 million downloads in Q1 2021 to more than 25 million in Q1 2022. Furthermore, the arcade idle genre has seen a massive 2050 percent growth in downloads from Q4 2020 to Q1 2022.

Hyper-casual itself has grown into a goliath genre over recent years. In 2021, 13.7 billion downloads of games from this genre occurred, with 47.3 million of these being arcade idle games. Publisher Voodoo is among the companies to have enjoyed hyper-casual’s popularity, having celebrated six billion downloads in May, surpassing the likes of Microsoft, TikTok and Tencent.

Rollic crossed 2 billion lifetime downloads across its games portfolio last month, one year from its first billion downloads, as it tries redefining the hypercasual genre.

We reported on HomaJam, earlier in the year, which was the fifth edition of their game jam. Notably, it offered participants a 50/50 publishing revenue share – an interesting choice considering the nature of game jams, which are frequently concentrated game development events where limited time, subjects or other restrictions are in place, creating a high-creativity, high-intensity environment that has historically resulted in the creation of a mass of successful games the likes of Costume Quest, Don’t Starve, Lopp Hero, Superhot and Baba is You.