Game Of Thrones: 10 Most Satisfying Reunions 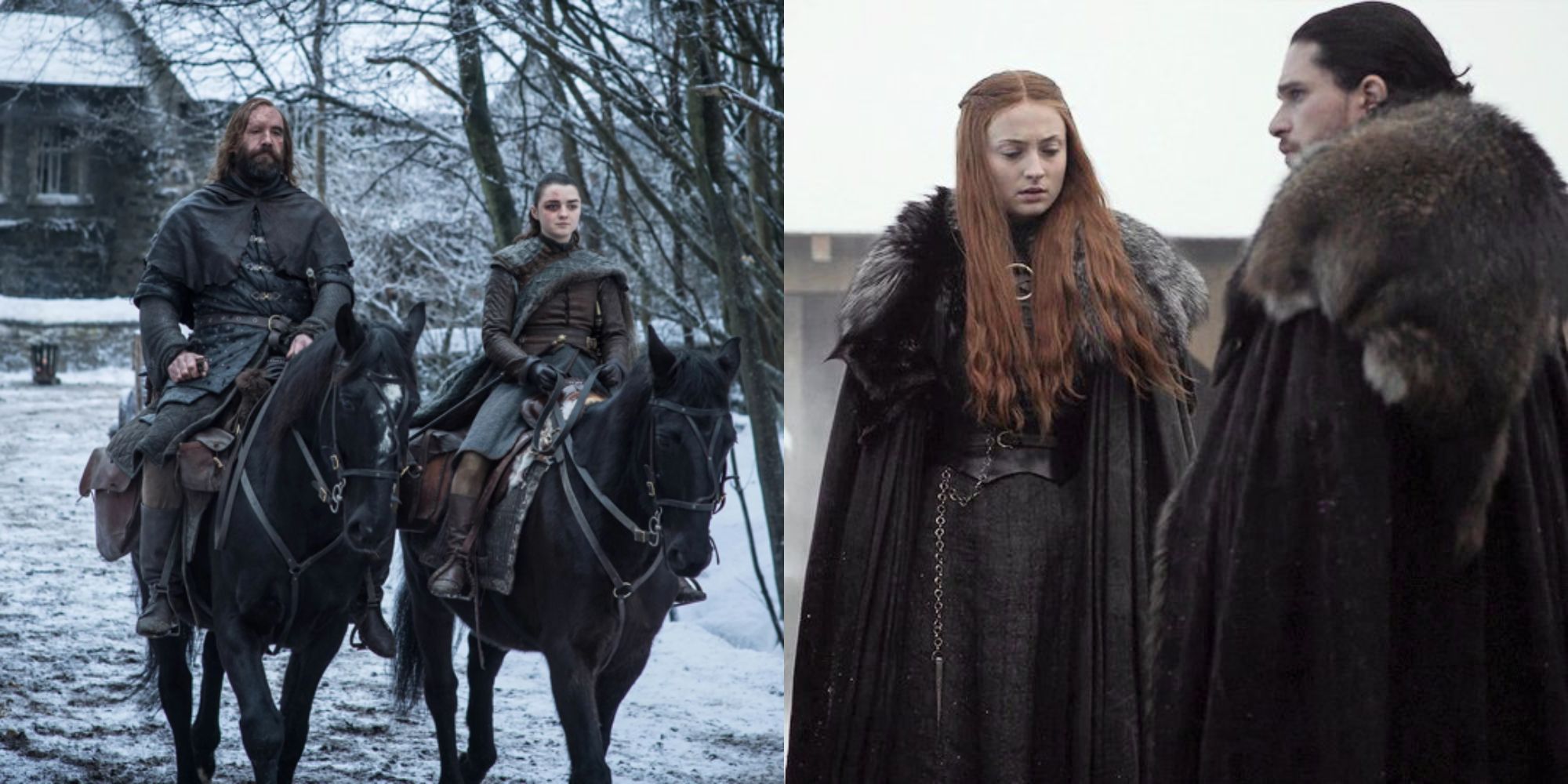 With the recent news that House of the Dragon will come back for season 2, it’s clear that the A Song of Ice and Fire franchise is stronger than ever. It all began with Game of Thrones, a show that featured a massive cast of characters and many ruthless and unforgettable storylines.

However, the show was not all violence and death; it also included many emotional moments, including several long-awaited reunions, especially in the latter seasons. From long-awaited reunions between siblings to old friends meeting again, these moments are among Thrones‘ most satisfying.

Marriage is a tool in Westerosi politics. Couples marry to strengthen alliances, with the bride and groom barely knowing each other. While Sansa is a prisoner in King’s Landing, the Lannisters force her to marry Tyrion. The marriage doesn’t last because Sansa escapes King’s Landing after Joffrey’s murder, but the two still share some meaningful moments.

RELATED: 10 Quotes That Perfectly Sum Up Tyrion Lannister As A Character

When they meet again, several years have passed, and they’re different people. Sansa and Tyrion are among the show’s sharpest politicians, meeting with a newfound respect for each other. It would’ve been nice to see them plotting together or particularly joining forces after Daenerys began her downfall, but at least they got to see each other alive again.

Arya meets Gendry while she’s still a child, and the two develop a complex bond. She develops feelings for him, but it’s unclear if she sees him as an older sibling-like figure or if she has a crush on him. Perhaps it’s a bit of both, although Gendry clearly sees her as a child.

They meet again years later, and their relationship takes a new turn. Reaction to Arya sleeping with Gendry remains divided, but there’s no denying that their reunion was long-awaited. They became stoic with the years but were visibly happy seeing each other again, even if it was at the end of the world.

Jon’s closest relationship was with Arya as she was the only one that saw him as a true brother; even Robb treated him as a bastard because of Westeros’ rigid attitude in matters of succession.

RELATED: The 10 Most Heartbreaking Jon Snow Quotes In Game Of Thrones

When the two finally reunite in season 8, it’s worth the wait. Neither is one for open-hearted speeches, but they say what needs to be said. The scene is slightly less impactful than either of their reunions with Sansa, but it still packs quite the emotional punch. However, it’s too short and somewhat rushed, which does diminish its power.

Sansa and Arya had a contentious relationship at the show’s start. They were complete opposites, making their dynamic chaotic and confrontational. When the sisters finally reunite, they have difficulty trusting each other because they don’t really know each other; they become different persons during their time apart. However, one of Sansa’s best decisions in Game of Thrones is lowering her defenses and trusting her sister, something Arya reciprocates.

Their reunion scene is one of the show’s longest. However, it’s painfully obvious that the sisters don’t know how to act, despite being genuinely happy to see each other. It’s a meaningful but awkward scene that shows their significant character growth.

Game of Thrones was famous for its numerous inappropriate relationships. However, Jaime and Brienne had one of the most honest connections in the show, bonding thanks to their honor and shared trauma.

The pair reunites a few times throughout the show, but their most significant encounter happens in season 6, where they meet as equals and harbor complicated feelings for one another. Given how they had been surrounded by several toxic individuals in this cruel world, fans were glad that these two eventually found a strong and healthy connection that was extremely worthwhile.

The Hound was one of the most complicated characters in Game of Thrones. He was morally reprehensible, cruel, and brutal; however, he harbored a deep pain inside, which became clear during his travels with Arya throughout seasons 3 and 4. The two form an unlikely bond that’s hard to define but is meaningful to their respective stories.

Arya leaves him to die at the end of season 4, finding herself incapable of killing him. The pair reunites in season 8, exchanging a few dry words in Winterfell and riding together to King’s Landing. Unfortunately, their reunion doesn’t last very long as The Hound was killed in a fight with Clegane, but fans will forever treasure the final conversation they had together, in which he taught Arya that it was okay to let go of the deep pain and anger inside of her.

The Stark children had a special bond with their Direwolves. Sadly, almost all the wolves die, except for two: Jon’s Ghost, who stays with him until the end, and Arya’s Nymeria. She released her wolf to save her from death, separating from her for years before meeting her again on her road back to Winterfell.

The scene is crucial to Arya’s character development. Nymeria doesn’t play nearly as important a role in the show as in the books, but she’s still one of Arya’s remaining bonds to her past. Their meeting allows them to put a definitive closure to their relationship, with Nymeria choosing to remain wild, just like Arya.

Podrick Payne was one of Tyrion Lannister’s few friends in Game of Thrones. Loyal to a fault and always ready to serve, Pod was staunchly committed to Tyrion, even saving his life during the Battle of the Blackwater. However, come season 4, Tyrion dismisses Pod, allowing the young squire to join Brienne on her travels.

Their reunion happens late in season 7, amidst a sea of other, more important meetings plot-wise. Yet, few reunions are as honest or heartwarming as theirs. Pod and Tyrion went through a lot together and never thought they’d see each other again, so it’s always a pleasure to see the joy on their faces when they do meet again.

For two people who hated each other, Cersei and Tyrion sure confided in each other a lot. Some of the show’s most memorable exchanges happened between these two during their time alone in King’s Landing during seasons 2 and 3.

RELATED: 10 Traits That Perfectly Sum Up Cersei Lannister As A Character In Game Of Thrones

Following Tyrion’s escape in the season 4 finale, the estranged siblings don’t see each other for years before reuniting in season 7. Their conversation is long, with the two confronting each other about everything while being vulnerable for the first time in a very long while. It is one of the highlights of an uneven season and a brilliant reminder that Thrones was always at its best when two brilliant actors exchanged witty and meaningful dialogue.

Despite barely spending time together, Sansa and Jon’s reunion was the most satisfying in the show. Perhaps it’s because it happened when they were both at their most vulnerable, with her escaping her tortuous marriage to the sadistic Ramsay Bolton and him having just returned to life.

Sansa and Jon’s reunion was also the first and thus occupied a special place in fans’ hearts. The fact that two people who were so different and barely had any ties came together as a family was particularly meaningful. Jon and Sansa had nothing in the world at that point, only each other, and that was enough.

NEXT: Game Of Thrones Seasons Ranked, According To Their IMDb Average