HomePolitics newsImran Khan to 'accept' any verdict by IHC CJ in contempt of...
Politics news 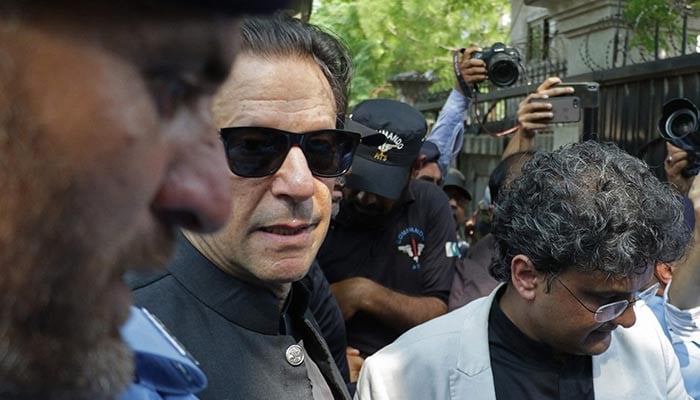 GUJRANWALA: Following the contempt of court case registered against him for threatening additional sessions judge Zeba Chaudhry, PTI chief Imran Khan on Saturday said that he will accept the Islamabad High Court’s (IHC) verdict on the case.

After Khan did not submit an unconditional apology to the court, the high court — on Thursday — decided to indict the former premier on September 22.

“I will accept any verdict given by the chief justice of Islamabad High Court,” Khan said while speaking during an address to a public gathering in Gujranwala.

Khan, during the jalsa, resorted to criticising the establishment. “Even if you call yourself neutral, the nation will hold you responsible if the country continues to get destroyed by the incumbent government,” he said.

The former premier, while urging the establishment to save the country, said if the economic situation gets worse, it will directly affect national security.

“As the economy deteriorates, Pakistan will have to bow down in front of other countries,” he added.

The PTI chairman said that he would call upon the nation anytime, asking them to keep themselves ready.

“I will call the entire Pakistan, so be ready,” he said.

Talking about the elections, Khan said that the party wants early elections while the coalition government was running away from general polls, adding that the public will take to the streets if they don’t hold free and fair elections.

The former PM while taking a jibe at Prime Minister Shehbaz Sharif said that he is telling the secretary general of the United Nations that he will spend the funds given to the flood victims honestly.

“Everyone knows that you and your son are charged with money laundering,” he said, alleging that the incumbent leaders “steal the nation’s money and send it abroad.”

Reiterating the alleged foreign conspiracy, the PTI chief said his government was toppled because he was not ready to get dictated by anyone.

“Our government was removed by conspiracy and thieves were imposed on us who wanted to disqualify me at any cost by charging me with cases,” he said.

Hurricane Ian on path to make landfall in Florida

Is Short Bitcoin ETF Exposure Gearing Up For A Squeeze?