Who’s Who in Kevin Smith’s Sequel 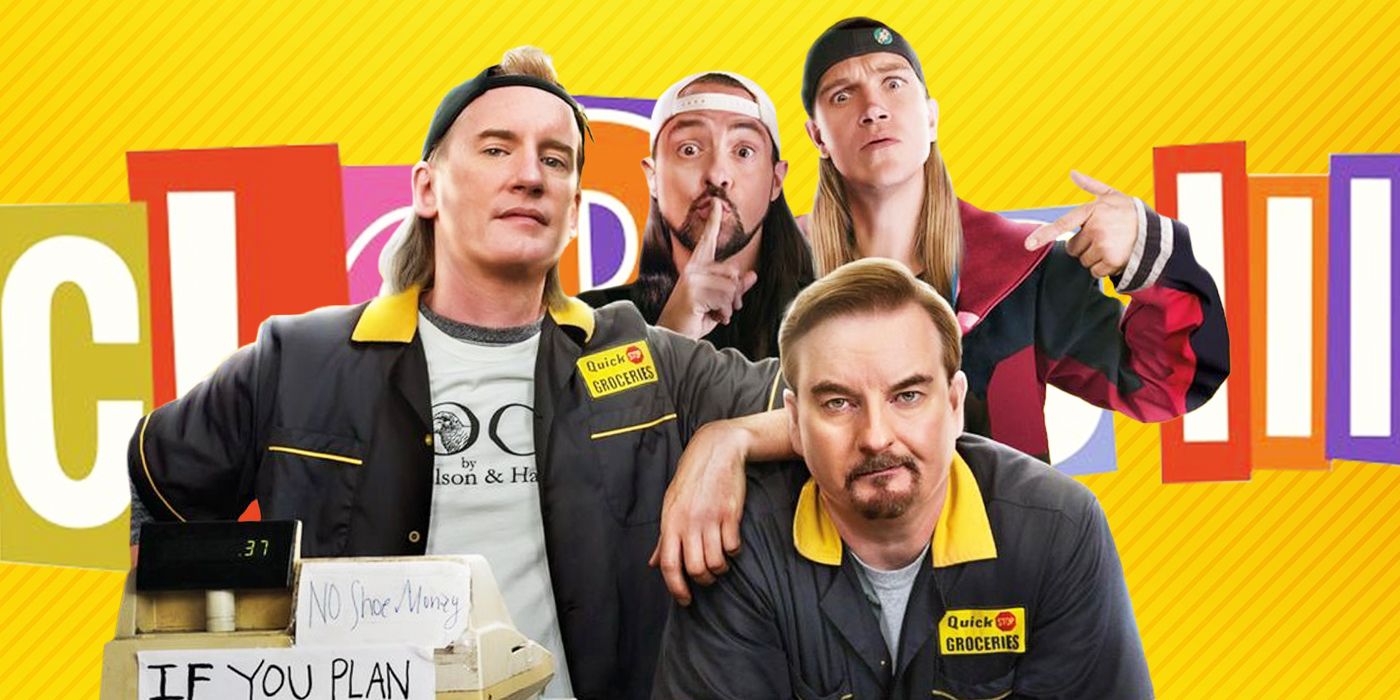 In the 1990s, the US saw an explosion of smart and funny young directors of Independent filmmakers like Richard Linklater, Quentin Tarantino, and Kevin Smith. Smith served irreverent slacker humor with dark jabs as well as heart and understanding. Probably the most acclaimed or remembered film from his oeuvre is Clerks. This 1994 classic presents a day in the lives of store clerks Dante Hicks and Randal Graves as well as their comical cast of friends and customers.

Throughout the rest of his career, Smith continued to show different sides of himself with more romantic comedies, buddy adventure movies, and action flicks, but he always returned to Clerks and their characters throughout the years. Whether following the antics of Jay and Silent Bob in other movies like Jay and Silent Bob Strike Back or giving the world a much-needed sequel with Clerks II, Smith has always allowed us the opportunity to check in with our favorite characters. For those who want a refresher in preparation for Clerks III, here’s a list of Kevin Smith’s favorite characters.

Dante Hicks, played by Brian O’Halloran, is the main character of the Clerks film series. When we are first introduced to Dante, he is a 22-year-old clerk at the Quick Stop Market and still lives with his parents. Though he often uses up his work hours by getting into philosophical debates about Star Wars, he basically runs the store since his even lazier coworkers can’t be bothered. The first film follows a day in his stressful romantic life as he has difficulty dealing with his girlfriend Veronica’s extensive sexual history and fights feelings for his ex-girlfriend Caitlin, but ends up with neither. By Clerks II, both he and his best friend Randal are temporarily forced to work at Mooby’s fast food restaurant, but are summarily saved by Becky, Dante’s new love interest, when she helps them reopen the Quick Stop.

Clerks III begins when Dante, who is still with Becky and working at the Quick Stop, decides to help Randal make a movie after suffering a heart attack. Though Brian O’Halloran has appeared in several other Kevin Smith films over the years like Dogma, he is primarily a stage actor in the Tristate area.

Randal Graves, played by Jeff Anderson, is Dante’s best friend and coworker. Randal is the definition of a 90s slacker who always arrives to work late and hates customers. Despite his hostility towards others and his overall blasé attitude, Randal really cares about Dante and even warns his ex-girlfriend Caitlin to never break his heart again. His character is great precisely because he is both careless and caring. In Clerks II, Randal accidentally starts a fire that forces both he and Dante to work at Mooby’s, but he is also the one that convinces Dante not to move at his fiance’s behest and instead do what makes him happy.

It’s Randal’s heart attack that kick-starts the story for Clerks III and leads to a hilarious and heartfelt movie shoot. Actor Jeff Anderson has also appeared in several Kevin Smith films but has even written and directed his own film, Now You Know, as well as starred in Star Wars: The Clone Wars.

Veronica Loughran, played by Marilyn Ghigliotti, is a college student and Dante’s girlfriend at the beginning of Clerks. Tensions arise between the two during a conversation about sexual relations when she reveals how many men she has performed oral sex on. She tries to apologize to Dante, but the relationship ends badly when Randal erroneously reveals that Dante is getting back together with his ex-girlfriend. She storms into the Quick Stop, attacks Dante, and leaves. She does not appear in Clerks II, but she is mentioned in a deleted scene where it is implied that they briefly got back together and broke up.

The extent of her role in Clerks III is still not known, but she is sure to pack a punch. Actress Marilyn Ghigliotti consistently collaborates with Smith but also works as a make-up artist in the TV/film industry as well as side work as a wedding stylist.

Becky, played by Rosario Dawson, is a lead female character in Clerks II. She is the manager of the Mooby’s where Dante and Randal work. Becky may say that she doesn’t believe in romantic love or the institution of marriage, but she falls for Dante. When she reveals to him, she is pregnant, Dante breaks off his engagement and proposes to Becky at Mooby’s. She accepts and helps Dante and Randal reopen the Quick Stop.

The Clerks III trailer reveals she is still with Dante, helping out with the Quick Stop and raising their child. Rosario Dawson is probably the biggest star in the Clerks series. Dawson made her debut in the gritty coming-of-age drama, Kids, and has since become a star of independent films and blockbusters like Rent, Death Proof, and The Mandalorian. In 2023, she will star as the title character in the Disney+ show Ahsoka, a spinoff of The Mandalorian.

Elias Grover, portrayed by Trevor Fehrman is a 19-year-old born-again Christian employee at Mooby’s alongside Dante and Randal in Clerks II. Though he is much more religious than Dante or Randal, he shares their love of movies and often obsesses over The Lord of the Rings and Transformers. Despite being constantly made fun of by Randal, it’s clear Elias means a great deal to both Randal and Dante. By the film’s end, he applies for a job at RST Video and becomes a clerk after Dante and Randal reopen the Quick Stop.

In Clerks III, Elias is still working with Dante and Randal and becomes an integral part of Randal’s movie crew. Trevor Fehrman made his debut in the teen comedy Cheats but has quit the business since making Clerks II. He now works as a web app developer, so this will probably be the last time we see him on the big screen.

Jay and his sidekick Silent Bob are probably the most memorable characters from the Kevin Smith universe. In contrast to Silent Bob, Jay speaks frequently and offensively and often treats people with aggression or bullying, including Silent Bob. Jay is always ready with a crass quip, a quality that made him a breakout star character. Both he and Silent Bob not only appear in the Clerks series but in their own series of films like Jay and Silent Bob Strike Back, Jay and Silent Bob Reboot, and Mallrats.

From the trailer, it appears that Jay is still hanging around New Jersey working as a drug dealer and loitering around the store. Jason Mewes grew up with Kevin Smith and has appeared in most of his work. Apart from that, he has starred in shows like The Flash and recently made his directorial debut with Madness in the Method.

Silent Bob, played by the director himself, Kevin Smith, is Jay’s mute companion. He rarely speaks, but when he does, he often has something eloquent to say. In both Clerks and Chasing Amy, he gives the protagonists’ sage advice on the importance of appreciating what you have. Smith rarely plays anyone other than Silent Bob so without this new Clerks movie, who knows when else we’d see him on the big screen.