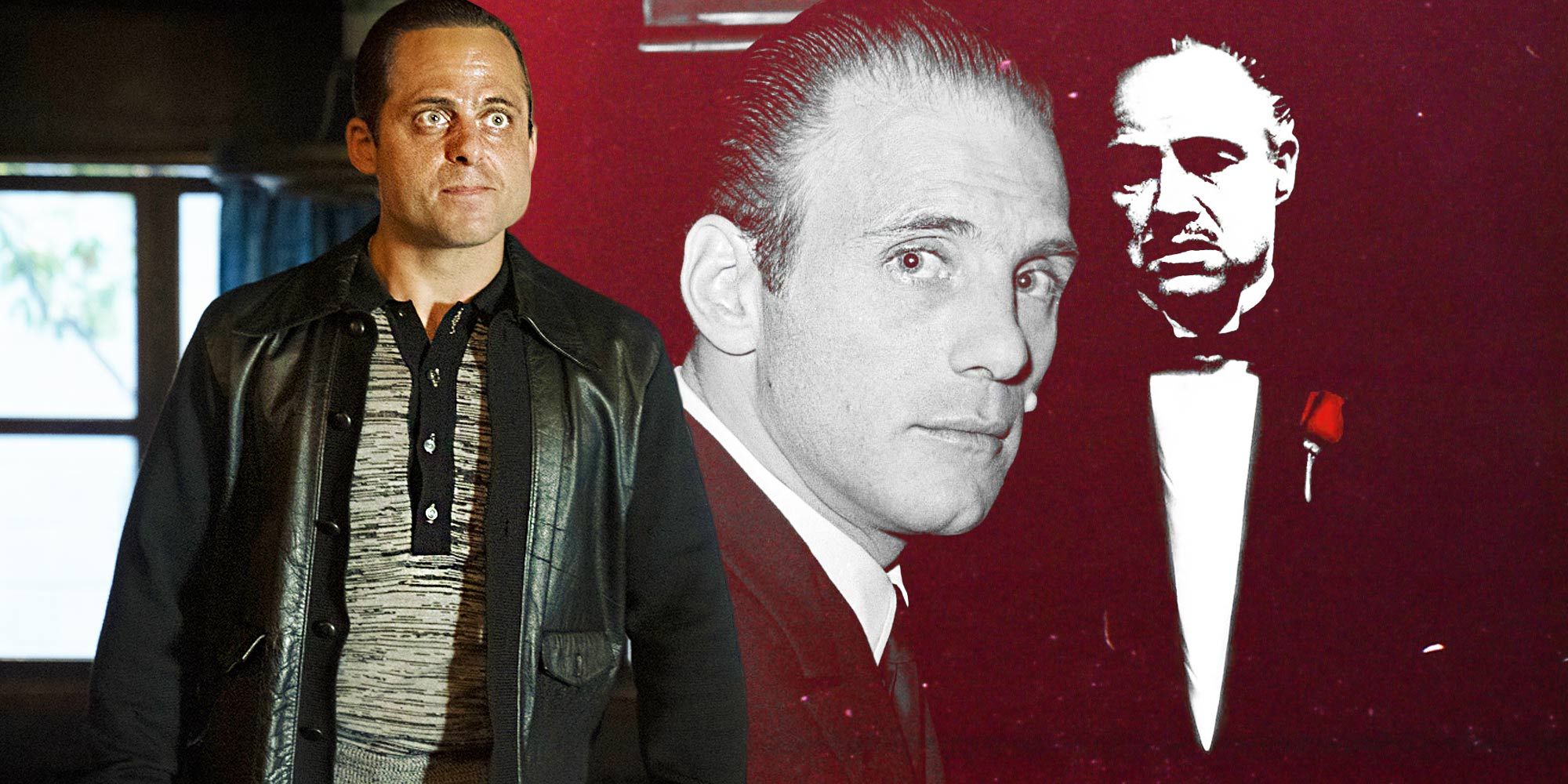 The Offer‘s real-life gangster Joe Gallo has links to The Godfather, including his ties to the Colombo crime family and his dispute with them, which run surprisingly deep. The Offer is the Paramount Plus mini-series about the making of Francis Ford Coppola’s The Godfather from the perspective of producer Albert S. Ruddy (Miles Teller). Alongside Teller, the show stars Juno Temple, Matthew Goode, Dan Fogler, and Colin Hanks, along with Giovanni Ribisi as Joe Colombo and Joseph Russo as Crazy Joe Gallo. While The Offer portrays larger-than-life organized crime connections, the reality was genuinely astounding.

The show traces the origins of the original book by Mario Puzo to the creation of the film and everyone involved, including the real-life Colombo crime family, which had a lot to do with the film being made and filmed in New York City. Crazy Joe Gallo was known as such after he was diagnosed with schizophrenia early in his criminal career and later became an enforcer for the Profaci crime family. He eventually formed his own crew and executed Gambino crime boss Albert Anastasia, later kidnapping his own bosses, leading to the first Colombo war. The Irishman/Goodfellas crossover Gallo was sentenced to 7-to-14 years in prison for extortion shortly after, and upon his release, he found that Joe Colombo had taken over the Profaci family. At the time, Colombo had started the Italian-American Civil Rights League, which was ultimately created to be a PR front for the mafia, while attempting to deny the existence of it. This caused significant problems for The Godfather early on and would lead to a life-changing turn of events for Colombo.

Related: The Offer: How Ruddy Really Got The Mafia To Approve The Godfather

During a rally for the Italian-American Civil Rights League in 1971, while The Godfather was in the midst of production, Colombo was shot three times by a man believed to be sent by Gallo. Colombo survived the attempted assassination but was paralyzed until his death in 1978. Crazy Joe Gallo (who also appears in The Irishman and Goodfellas) was suspected of orchestrating the hit, as he wanted a payout from Colombo for a peace treaty that was negotiated while he was in prison. The assassination attempt on Colombo took place mere blocks away from where The Godfather was filming that day, which happened to be the scene in which Michael Corleone (Al Pacino) was ordering the hits on the five families. Fortunately, the production maintained the support of the Colombo family throughout. A year later, Gallo would be gunned down in a restaurant in front of his family with multiple people claiming responsibility.

Gallo, The Godfather, and The Irishman – An Ironic Connection

In the time after his release from prison, Joe Gallo became somewhat of a celebrity, hanging out with the Hollywood stars like Jerry Orbach, who played a character based on Gallo in the comedic gangster film The Gang That Couldn’t Shoot Straight (ironically a film Al Pacino nearly made before being cast in The Godfather). Famed musician Bob Dylan even wrote a song in celebration of Crazy Joe Gallo called “Joey” in 1976. The police investigation after Gallo’s death couldn’t determine who was directly responsible for the murder, but one of those who claimed to have carried out the hit has another movie connection, but to a different gangster film: Martin Scorsese’s The Irishman, which stars The Godfather franchise stars Al Pacino and Robert de Niro.

De Niro played a young Don Corleone in The Godfather: Part II (for which he won an Oscar), but in The Irishman he plays Frank Sheeran, the real-life mob hitman who claimed to be the one who executed Gallo. In fact, Gallo’s murder (as well as the assassination attempt on Colombo) is portrayed in Robert de Niro’s The Irishman, with Sheeran carrying out the hit while narrating the scene. Pacino plays Union Boss Jimmy Hoffa in the film and is also killed by Sheeran, making an even stranger connection between Gallo, The Mob, Hollywood, The Godfather, and both De Niro and Pacino, playing out in The Offer as a truly ironic interconnected Hollywood mob story.

The Offer episode 8, “Crossing That Line,” shows Joe Gallo’s connection to the making of The Godfather and his subsequent death. However, much of his connection to the feature film has been fictionalized for the show. It’s common for television shows to tweak history for a greater narrative purpose, and The Offer‘s story certainly takes some liberties. In the episode, Joe Gallo tries to squeeze Ruddy for money while Colombo is in the hospital. However, before he makes the decision to cough up the cash, Crazy Joe Gallo is shot by Caesar (Jake Cannavale). But most of this is simply untrue, despite the broader details of his death being portrayed accurately.

In real life, Joe Gallo died in 1972, after The Godfather had already been released, not while it was in production (though, he was murdered on his birthday). It’s painted in the series that Caesar shot Crazy Joe Gallo out of revenge for his assassination attempt on Colombo, but this is ultimately just speculation. One of the biggest liberties that The Offer takes with Joe’s character is his connection to The Godfather in general. Reportedly, Joe Gallo had nothing to do with the production of The Godfather, and his involvement portrayed in the series is purely fictional.