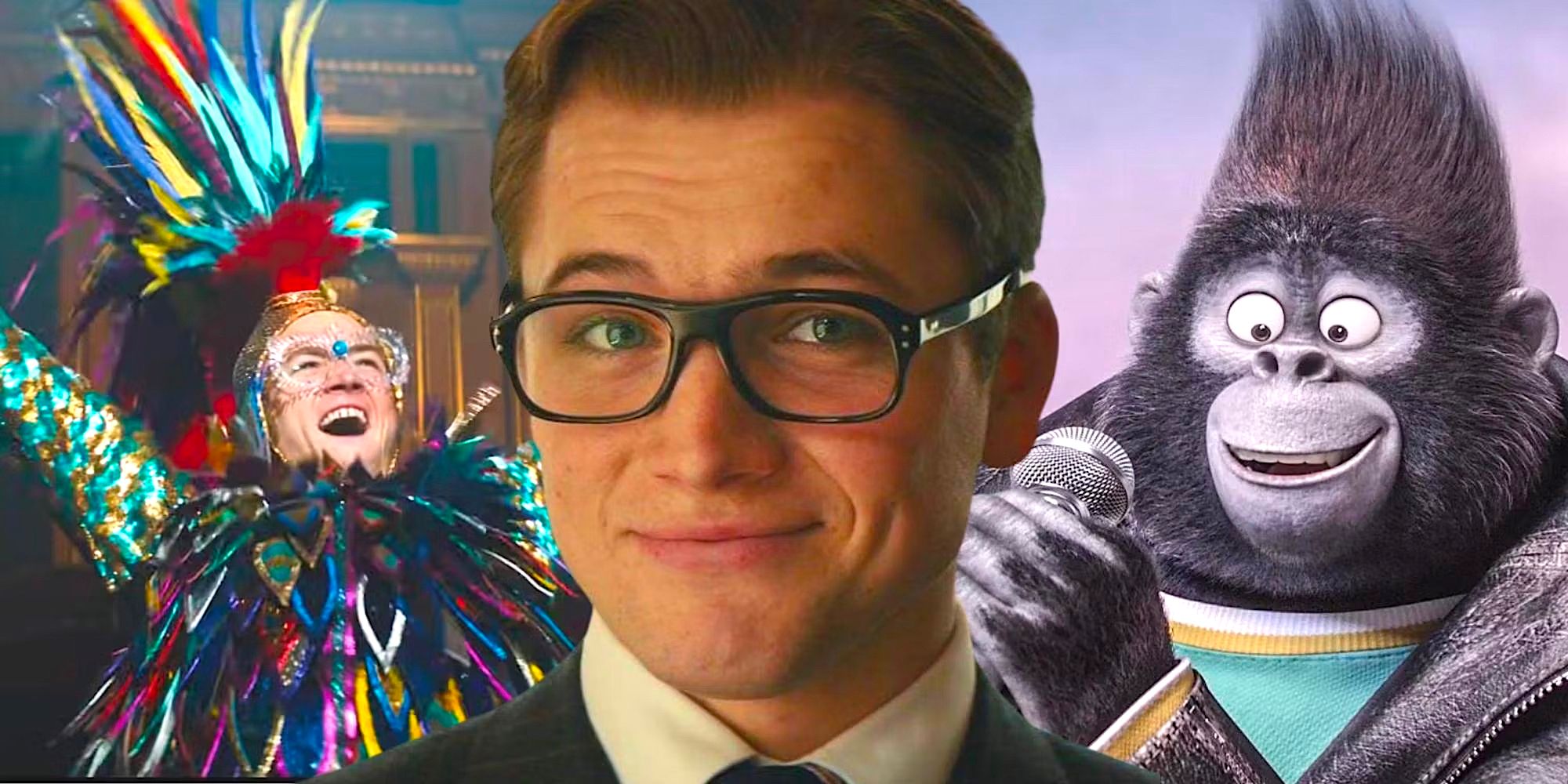 Taron Egerton has appeared in many movies of varied quality during his impressive young career, and they can be ranked from worst to best. The Welsh actor burst onto the big screen in 2014 and has remained a consistent Hollywood performer ever since. Already proven to be a versatile actor capable of starring in a variety of genres, this success has led to rumors that Egerton could even become the MCU’s Wolverine.

Egerton was born on November 10, 1989, in Birkenhead, Merseyside. Despite being born in England, Egerton considers himself Welsh, having moved to Llanfairpwllgwyngyll, Wales, as a young child where he was schooled. Taron means “thunder” in Welsh, and he resided in that UK nation until moving to London to study at the Royal Academy of Dramatic Art, where he graduated with an acting degree in 2012.

Related: If Wolverine Is MCU Canon, Then Where Is He (& The Other X-Men)?!

He has earned global recognition for his acting ability, winning a Golden Globe and receiving nominations for BAFTA and Screen Actors Guild awards. In addition to starring in movies, Egerton has turned his talents to television roles, including Netflix’s The Dark Crystal: Age of Resistance and Apple TV+’s Black Bird. Taron Egerton has already become one of entertainment’s most recognizable faces, so with that in mind, here’s a look at the rising star’s movies, ranked from worst to best.

James Cox’s Billionaire Boys Club is based on the real group of the same name. In the 1980s, they hatched a get-rich-quick scheme that ended in a murder. Egerton plays Dean Karny, a lead member of the Billionaire Boys Club, and while his own performance isn’t bad, the movie itself doesn’t make good use of its interesting premise. It fails at the Wolf Of Wall Street–like tone that it aims for. Billionaire Boys Club was also a financial flop, largely because Kevin Spacey’s involvement meant that few cinemas showed the movie, and was critically panned, even winning a special Razzie Award.

Otto Bathurst’s ambitious retelling of the Robin Hood legend follows the outlaw’s adventure to steal from the Sheriff of Nottingham. Despite its $100 million budget and talented cast, the 2018 Robin Hood disappoints because the story doesn’t bring anything fresh to the classic tale other than modern special effects and action sequences. Taron Egerton gives a solid showing as Robin Hood but is ultimately let down by the movie’s blandness and predictability.

Legend is a crime thriller that adapts John Pearson’s biography The Profession of Violence: The Rise and Fall of the Kray Twins and stars Tom Hardy as both Ronnie and Reginald Kray. Taron Egerton has a supporting role in the movie as “Mad Teddy” Smith. One of the Kray twins’ henchmen, Smith was rumored to have had a sexual relationship with Ronnie, as is depicted in Legend. The movie received mixed reviews, with star Tom Hardy widely praised for his impressive double performance, but Legend was criticized for being a boring take on two of London’s most prolific gangsters.

Related: Why So Many Tom Hardy Characters Are Difficult To Understand

Directed by Matthew Vaughn, Kingsman: The Golden Circle sees the return of Eggsy (Egerton) and the rest of the Kingsman intelligence service. This time, they team up with their American counterpart, Statesman, to take down a deadly drug cartel. The Golden Circle continues the Kingsman franchise’s high-octane action as it toes the line between homage to and parody of the spy genre. Egerton plays a more mature version of the cheeky agent Eggsy following the events of Kingsman: The Secret Service. The wacky end of the Kingsman sequel features a cameo from Elton John, continuing a low-key trend in Egerton’s work.

Written and directed by Garth Jennings, Sing is an animated comedy about Buster Moon, an anthropomorphic koala who holds a singing competition to prevent his theater from closing. While it may be low on substance, Sing is an undeniably entertaining and uplifting watch that is full of hits performed by its ensemble cast, including Matthew McConaughey and Scarlett Johansson. Taron Egerton voices Johnny, a teenage gorilla who loves to sing but is worried about what his macho mobster dad would think. Johnny’s relationship with his father brings emotional weight to Sing, and Egerton’s rendition of “I’m Still Standing” gave a glimpse of what was to come with his future role as Elton John in Rocketman.

Boasting another impressive voice cast, Sing 2 sees Buster Moon’s group of performers attempt to put on a spectacular space-themed musical in Redshore City, the Las Vegas of the Sing universe. Sing 2 follows a similar formula as the original movie, and once again it delivers a charming, fun story with hilarious moments and stunning visuals. Egerton’s Johnny faces a crisis of confidence during Sing 2 as he struggles with the show’s choreography, but the ongoing tension between him and his dance instructor, Adam Buxton’s Klaus Kickenklober, builds to the movie’s best musical sequence.

Dexter Fletcher’s Eddie the Eagle tells the true tale of the titular British athlete, who in 1988 became Great Britain’s first Olympic ski jumper in six decades. Eddie The Eagle is a classic underdog story and, although it reuses typical sports film clichés, it’s a sweet and heart-warming movie that can be enjoyed by viewers of all ages. Starring alongside original Wolverine actor Hugh Jackman, Taron Egerton plays Eddie “The Eagle” Edwards in the movie and expertly captures the real-life sporting legend’s quirky personality and no-quitting attitude to prove his doubters wrong.

Related: Every Song In Sing 2 Ranked Worst To Best

Testament of Youth adapts Vera Brittain’s memoir of the same name, recalling her experience during World War I when she postponed her studies to serve as a nurse while her brother, her love interest, and her admirer all go to war. The brutally honest account of war stars Alicia Vikander as Vera, and it is her nuanced and moving performance that earned Testament Of Youth universally positive reviews. Making his movie debut, Taron Egerton has a supporting role as Vera’s brother, Edward.

Kingsman: The Secret Service is directed by Matthew Vaughn and based on Dave Gibbons and Mark Millar’s comic book of the same name. The Secret Service follows Eggsy, played by Taron Egerton, an unlikely new Kingsman recruit who is thrown on a mission to save the world from a billionaire megalomaniac who intends to solve the Earth’s environmental problems by killing most of its human population. The Secret Service offers a genuine alternative to other popular spy movies in part thanks to its wild action, including Harry Hart’s (Colin Firth) murderous church rampage.

Rocketman is Taron Egerton’s most eccentric movie, but it’s also his best. Working once more with Eddie the Eagle director Dexter Fletcher, Egerton stars as Elton John and tells his life story against the backdrop of his greatest hits. Commendably, Egerton sings Elton John’s songs in Rocketman himself, rather than lip-syncing, and masterfully captures the iconic musician’s flamboyant style. Rocketman blends together fantastical musical sequences with an honest dramatization of Elton John’s fascinating life, which won Taron Egerton a Golden Globe for Best Actor in a Motion Picture Musical or Comedy.