The Worst Things To Happen To The Walking Dead Villains 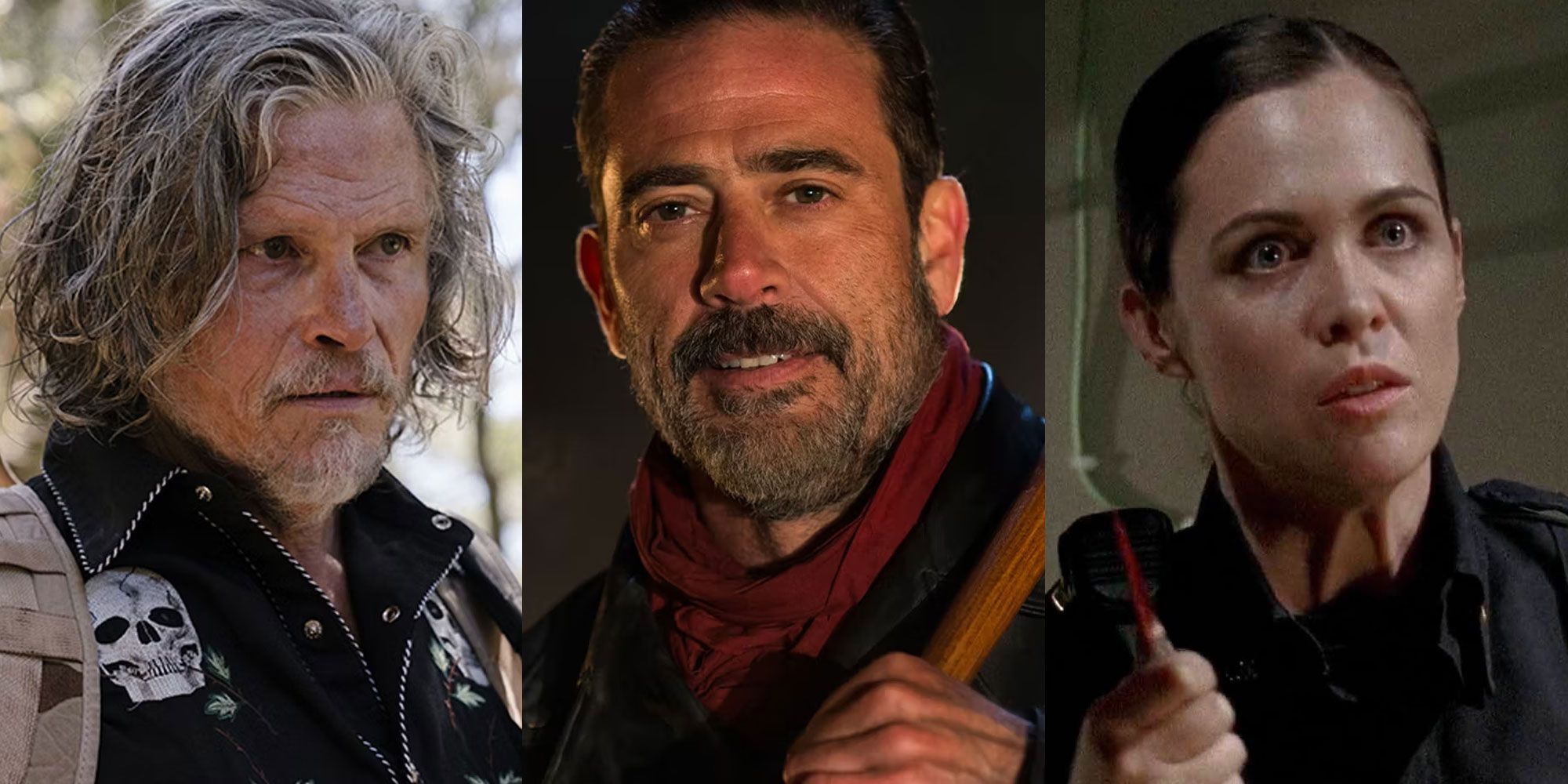 It was recently announced at comic-con that Andrew Lincoln and Danai Gurira would reprise their roles in a new The Walking Dead series. The original series is set to air its final season this fall. The show built an incredible world filled with fantastic characters. Notably, some of the most popular and famous characters are villains.

There have been plenty of villains throughout the show that tried to go against Rick and his crew. This mistake proved fatal for most of them. These villains got the worst of it.

Initially Rick’s best friend and a potential protagonist of the show, everyone believed that Shane could be one of the good guys. However, it wasn’t long before viewers got to see that he had a dark side, which was unleashed when the zombie outbreak began (and heightened after Rick returned and was reunited with Lori and Carl).

Related: Every Walking Dead Actor Who Is Also In The MCU

While a small part of Shane had been happy to see that Rick was alive, no one doubts that his return also marked the beginning of the end for him. Not only did he lose his newfound family with Lori and Carl, but he also lost the support of the other survivors too as they began to see Rick as their leader and protector (which is where most of his resentment built up). In Shane’s mind, he genuinely did believe that he could have had a great life if Rick had stayed gone.

Although some fans believe that Phillip Blake (aka The Governor) was one of the most irritating characters in The Walking Dead, there’s no doubt that he had a profound impact on the story (particularly as he was responsible for the deaths of many main characters, including Andrea and fan favorite Hershel). He also made his mark on the show after his sadistic and ruthless leadership skills led to many shocking moments.

However, the series did imply that The Governor hadn’t always been this way (as there is a belief that losing his daughter was his breaking point). It’s a plausible idea when the viewers consider the fact that he had her reanimated corpse locked away in his apartment and blamed himself for what she had become. If he had managed to stop Penny from becoming a Walker, there’s a possibility that The Governor might not have become so villainous.

Joe led a group called The Claimers, and they were an antagonist for the latter half of season 4. They had multiple run-ins with Rick, Carl, and Michonne on their way to Terminus.

While Joe didn’t get much of a story arc, he did make his staple on the show by leading one of the evilest groups. Not only had he encouraged them to commit heinous deeds but he had no qualms in harming innocent people to achieve his goals (so it wasn’t at all surprising fans prayed that he and his group got their comeuppance soon). Fortunately, they eventually met their demise in the season 4 finale when Rick killed Joe by biting his out his jugular. Given some of the violent crimes he committed as well as his ruthless nature, it only seemed fitting he died in a brutal manner.

Gareth was a leader at the Terminus sanctuary and one of The Walking Dead’s best villains. He was revealed to be the antagonist in seasons 4 and 5 after fans discovered that he had turned Terminus into a cannibalistic nightmare.

His ideologies were certainly frightening, particularly as he didn’t see anything wrong with what he was doing and showed no remorse for his actions. That’s why Bob’s revenge has proven to be a particular fan favorite moment. After Gareth taunted Bob while he ate his leg, the viewers couldn’t help but cheer when Bob revealed that he had been bitten, so he had passed the virus on to them. Gareth would have certainly suffered a slow and painful death if Rick hadn’t killed him moments later.

Dawn had a short-lived run on the show as she was the main villain for a series of episodes in season 5. She was a police officer who led a corrupt group of survivors at a hospital. She also had one of the evilest plans out of all The Walking Dead villains.

Dawn’s death was unfortunate because, even though her leadership techniques were not always sound and ethical, her death resulted from an accident. When Rick’s group comes to the hospital to get Beth back, Dawn insists on them returning Noah. Noah goes but Beth stands up for Noah and, after a little speech, stabs Dawn in her vest, which causes Dawn to accidentally shoot Beth on reflex. Although it’s hard to tell if she meant to kill Beth or not, there’s no denying that this was certainly one of the most shocking scenes.

Owen was a devoted member of a cult called The Wolves, and was a villain for seasons 5 and 6. He was extremely reckless in his adventures and cared a lot more for himself than others, having no qualms in holding people hostage to get what he wants.

Related: Most Unexpected Character Deaths In The Walking Dead, Ranked

This was one of the reasons why it wasn’t surprising that he quickly made enemies wherever he went. Unfortunate for him, it was his selfish and antagonistic attitude that also contributed to his downfall the most since he was ultimately killed by Carol after trying to get to the infirmary with Denise (who was trying to save his life). If Owen had decided much earlier on that he was better off working with the group instead of threatening him, there’s a possibility that he could have been alive today.

Natania founded Oceanside after a Savior outpost led by Simon killed most of her family. She certainly made an enemy of Rick’s group when she refused to join Alexandria’s cause to help defeat Negan and The Saviors.

The worst thing to happen to Natania was the discovery of this community by Simon. He threatened to kill their whole camp if they did not relinquish supplies to them, which forced her entire group to relocate and make Oceanside. Natania’s initial community could have survived peacefully if it were not for Simon and his followers

Dee, better known as Alpha, was the leader of The Whisperers and was the villain for seasons 9 and 10. She was a ruthless leader who would kill anyone, including her own daughter, if they would not succumb to her sadistic orders.

One of the worst things to happen to Alpha was her death and how it came at the hand of Negan when he tricked her into a trap. While they did have a complicated relationship, it was clear that Alpha felt a strong connection to Negan and really valued his opinions (so her dying at his hand was the ultimate betrayal).

Although Beta may have been introduced as the right hand man of Alpha, fans would agree that he changed drastically in season 10 once he became the de-facto leader of the Whisperers.

After Alpha’s death, it seemed like Beta lost all sense of purpose and direction in his life. He had gotten used to following Alpha’s orders and protecting her from harm, so now that she was gone, he didn’t know what to do with himself. The viewers were certainly more terrified of this version because Beta didn’t have anything to lose anymore and would stop at nothing to get his revenge. Luckily, Daryl managed to stop him just in time before he could do any more damage.

Negan Smith – The Loss Of Lucille

A villain with one of the most complex backstories, the season 10 finale fleshed out Negan’s story some more. While fans knew that he had a deep love for his wife, naming his iconic baseball bat after her, this episode showed their relationship in depth, with Negan expressing that he had a lot of guilt about not being there in her final moments and for having an affair.

This guilt certainly influenced Negan’s actions in the future for, despite Lucille forgiving him, he did not believe he was worthy of it (which is why he believed he was making up for it through his leadership and “protecting” the Saviors). Unfortunately, he failed to realize how wrong his methods had been, and by the time he realized it, it was just too late.

Next: 10 Main Characters And Their Greatest Loss In The Walking Dead