HomeVideo14 Things Only Die-Hard Fans Know About The Show
Video

14 Things Only Die-Hard Fans Know About The Show 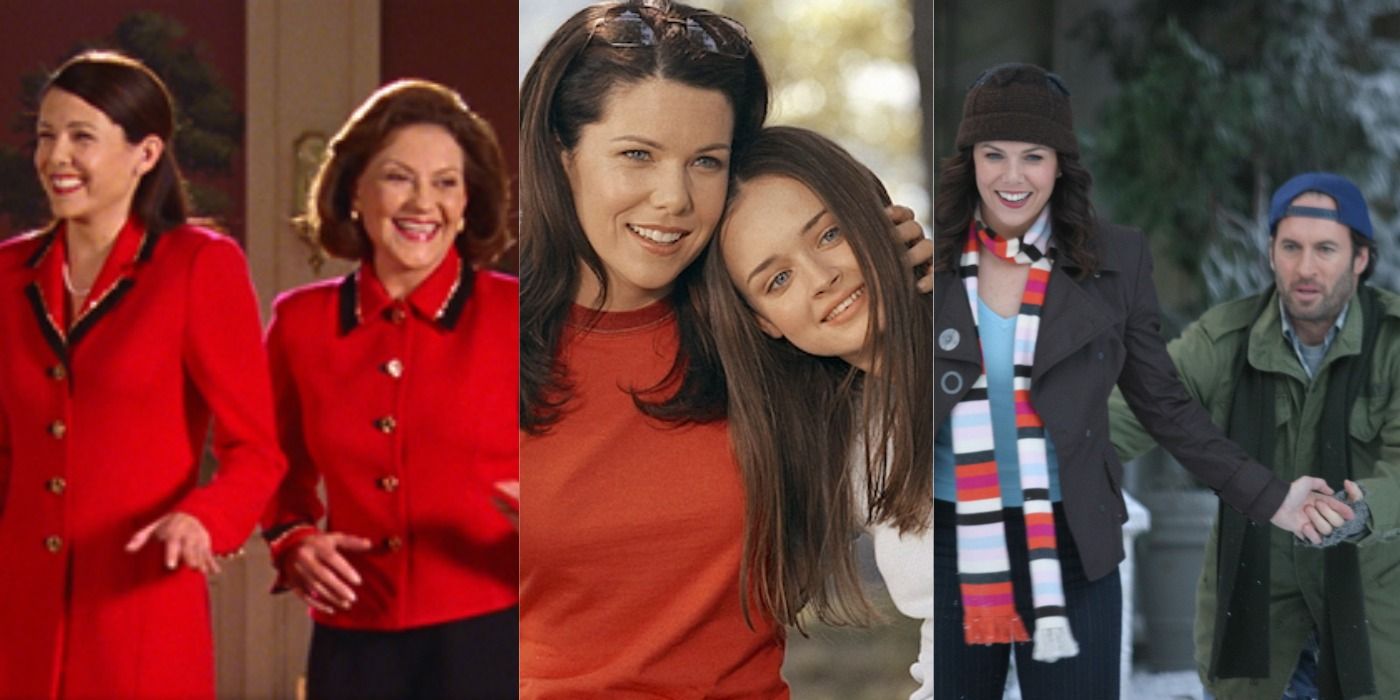 Gilmore Girls remains a popular show despite ending in 2007, to the point that its continued following even led to a revival on Netflix in 2016. But despite its success, not all fans of the show know everything there is to know about this mother-daughter story.

While many know that Keiko Agena—who played the part of Lane Kim on Gilmore Girls—was 11 years older than her character, there are many more interesting Gilmore Girls facts to discover about the show that will undoubtedly make the next rewatch even more exciting.

Although it’s been six years since the reboot released on Netflix, there are still quite a few interesting Gilmore Girls facts about the series that diehard fans aren’t aware of or that haven’t even been publicly discussed until recently. From the inspiration behind Gilmore Girls‘ mother-daughter theme to the way some actors were chosen for their parts, there’s an incredible amount of depth behind Gilmore Girls that the cast and crew of the show continue to reveal.

While Rory and Lorelai spend most of their time together eating all kinds of food on Gilmore Girls and drinking gallons of coffee, the latter was not to Alexis Bledel’s liking. According to Zimbio, the actress didn’t have coffee in her cups. Instead, it was Coca-Cola.

RELATED: 10 Best Foods Mentioned On Gilmore Girls, According To Reddit

Bledel was not the only one to fool fans with her drink of choice. It turns out that because Lauren Graham already drank a lot of coffee off-camera, she didn’t want to drink too much while they were filming, so sometimes her cup was actually filled with water.

Gilmore Girls was known for its witty pop culture references thrown about from Rory, Lorelai, Sookie, and Lane. The women loved different genres of music, movies, and anything related to celebrity gossip.

Funny enough, it turned out that the actresses didn’t always know the pop culture references they were talking about. In an interview with Entertainment Weekly, Bledel mentioned that although she sold the pop culture references in Gilmore Girls, they didn’t always understand what they were talking about. “We’d have to look them up on our own, typically,” she joked.

There were countless memorable Friday night dinners on Gilmore Girls. Since Rory and Lorelai didn’t always get along with Emily and Richard, most dinners turned into a dramatic occasion rather than a classy affair.

For those who wondered if the food the Gilmores ate was as good as it looked, Lauren Graham had some strong words. According to CNN, Graham said some of her favorite scenes to shoot were her outbursts with Emily at Friday night dinners, the only problem was that the food wasn’t as picture-perfect as it looked. “The food was always terrible,” she laughed.

How Did The Show Come To Be?

With numerous awards, seven seasons, and a reboot, Gilmore Girls was and is a raging success. Today with the series streaming on Netflix, the show’s fans continue to rewatch and show support. But how did the series come to be?

Mental Floss explained that Gilmore Girls’ creator, Amy Sherman-Palladino, stayed at an inn in Washington, Connecticut, which inspired it all. She said while driving through the town, “Everything is green and people are out, and they’re talking. And we went to a diner and everyone knew each other and someone got up and they walked behind the [counter] and they got their own coffee because the waitress was busy.” After the trip, the town inspired her story.

Scott Paterson Was The Only Person For Luke

Scott Patterson nailed the role of Luke Danes. Luke was often the voice of reason while being one of the few snarky townspeople in Stars Hollow. As Lorelai’s best friend, he also became a love interest that fans supported.

E! News noted (via Vanity Fair) that after Scott Patterson’s audition, he was the only one casting directors wanted for Luke. Casting director Jill Anthony said, “Amy said, ‘I don’t need to see anyone else. He’s 100 percent it.’” Funny enough Patterson didn’t think he was going to get the role so he had a tough attitude during it, which only added to the kind of guy casting was looking for.

While Rory had several love interests throughout the course of Gilmore Girls, other characters had real-life love stories off camera.

It turns out that Alex Bledel dated Milo Ventimiglia, who played Jess Mariano on the show, for four years, according to Us Weekly. The pair split in 2006 and Bledel eventually married her Mad Men co-star, Vincent Kartheiser, in 2014. Sadly, in 2022, Bledel and Kartheiser filed and finalized their divorce, according to People.

Luke’s Character Was Meant To Be Different

It’s hard to imagine Gilmore Girls without Luke constantly bantering with Rory and Lorelai in his diner. Yet, the character was not always meant to be a big part of the show. In fact, according to Entertainment Weekly, the original plan for Luke’s character on Gilmore Girls was very different, as creator Amy Sherman-Palladino had written him as a woman.

The show’s network requested more men in the series, so she changed that character to Luke, and Scott Patterson landed the part. He also was only meant to be in the pilot episode, but the chemistry he had with Lauren Graham was such that he became a series regular. Together, Lorelai and Luke had some of the best episodes in the series.

The Scripts Were Longer Than Usual

Gilmore Girls is a fast-paced show when it comes to dialogue. Indeed, that’s a signature trait of Amy Sherman-Palladino’s writing, and it required the actors to be able to talk very fast. Their fast-paced conversations were the focal point of many Gilmore Girls memes.

According to Vox, the scripts for the episodes were around 80 pages long, while the usual length for an hour-long episode of television is 40 to 50 pages. That’s a lot of dialogue to remember, but it was part of the show’s charm.

Jess Was Supposed To Have His Own Spinoff

While Team Jess fans wished that Rory had ended up with him (or at least to have seen their relationship develop more on Gilmore Girls), Milo Ventimiglia’s character left the show at the end of season 3. However, Jess was meant to be back in his very own show called Windward Circle.

According to Zimbio, the season 3 episode called ‘Here Comes The Son’ was meant to serve as a backdoor pilot to that spinoff set in Venice Beach and focused on the relationship between Jess and his estranged father. However, filming on location was too costly and plans for this spinoff were scrapped.

The Music Store Owner Was Someone Special

The iconic Gilmore Girls opening credit song was called “Where You Lead” and performed by Grammy Award winner Carole King, but King didn’t only sing for the show.

RELATED: 10 Most Unexpected Things To Happen in Gilmore Girls

As highlighted by Us Weekly, King unexpectedly scored a recurring role on Gilmore Girls starting in season 2. She played Sophie Bloom, the record store owner in Stars Hollow who allowed Lane to use her store drum set to practice.

Some fans know that Liza Weil initially auditioned for the role of Rory Gilmore. However, not all know that the part of Paris Geller was written specifically for her.

According to Buzzfeed, Amy Sherman-Palladino called Weil after her audition to tell her that if the show was picked up she would write an arc and a character specifically for her. That turned out to be the very special and unforgettable Paris. Paris had some amazing quotes that perfectly summed up her character while being a force to be reckoned with. She became a fan-favorite.

When a person’s job requires them to talk fast all day long, they’ll need their breath. Lauren Graham and Scott Patterson were both smokers when they started working on Gilmore Girls, but they quickly realized that the pacing of the dialogue on the show required them to make a lifestyle change.

According to Insider, Patterson and Graham quit smoking so they could keep up with the fast-paced lines their characters had to deliver.

Alex Borstein Was Supposed To Be Sookie

Before being in another Amy Sherman-Palladino show, The Marvelous Mrs. Maisel, Alex Borstein was supposed to be Lorelai Gilmore’s best-friend Sookie St. James on Gilmore Girls. Fans loved Sookie’s scenes and she became a beloved character. However, according to Cosmopolitan, the actress could not make it happen due to scheduling conflicts.

Chris Pine Auditioned For The Show

Gilmore Girls had a few guest stars and celebrity cameos from prolific actors. But it also had soon-to-be-famous actors auditioning for the show.

According to Insider, Star Trek’s Chris Pine had his very first audition ever for a part on Gilmore Girls. It is unclear what that part was supposed to be and, obviously, the actor didn’t get it, but that didn’t prevent him from having a successful career in Hollywood afterward.

Next: The 10 Best TV Shows To Watch On Netflix This Month