10 Memes That Sum Up Wizarding Society 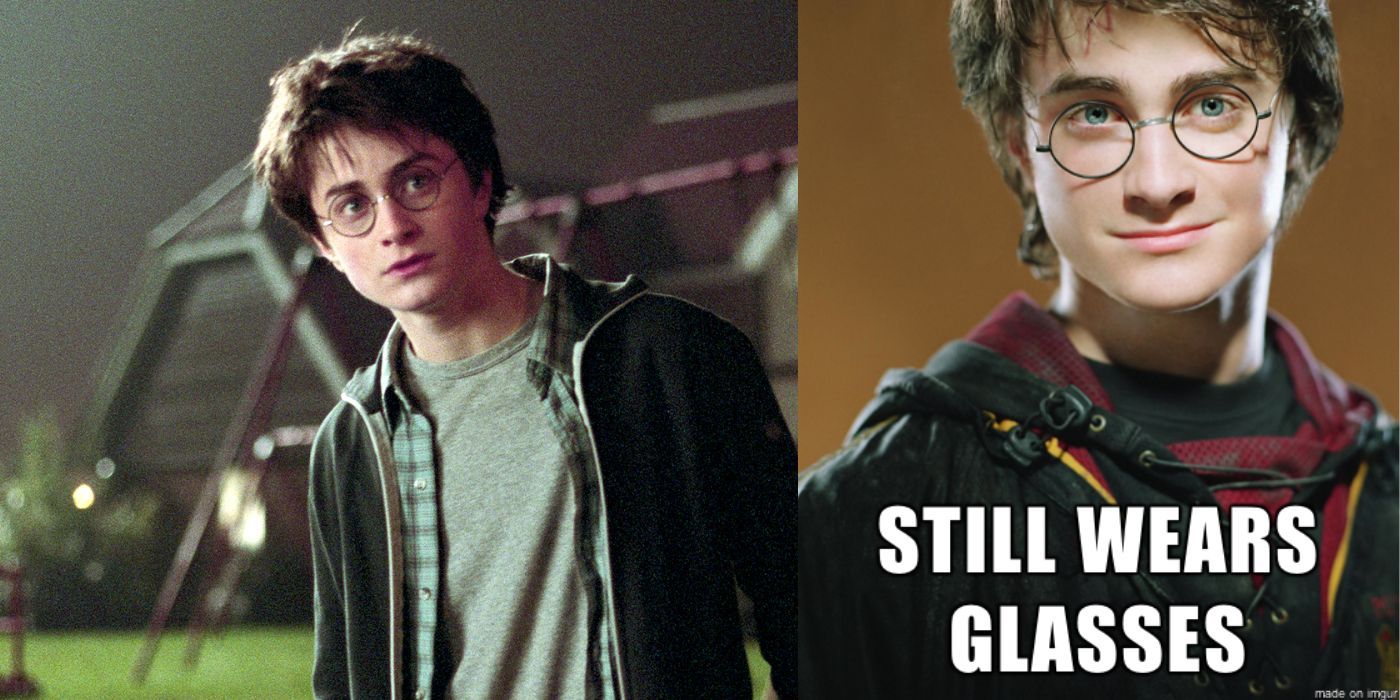 The famous wizarding world from Harry Potter is expanding more and more, with new spin-offs like Fantastic Beasts: The Secrets of Dumbledore and the upcoming video game Hogwarts Legacy both hitting the public this year. This is exciting to fans of the franchise, who are thirsty for any excuse to further immerse themselves in the magical world that has charmed them for over two decades.

However, even the most devoted fans can’t help but laugh at some of the odd points of the wizarding world. The society that Harry and his friends call home has several quirks that have made audiences second guess their dream to be a part of it. The behavior of adults, the logic of time travel, and the strange regulations of the government are all aspects of the wizarding world that make little sense to the Muggles of the internet, but they can easily be summed up by a few good memes.

Confiding In Adults Is Useless

It will forever be frustrating to fans that Harry Potter didn’t go to an adult for help with some of his biggest problems. However, based on the few times that the Boy Who Lived tried his best to do just that, it becomes clear why he might have given up on involving the grown-ups in his life.

Typically, the professors at Hogwarts hardly took Harry seriously at all. In the rare case that they did, like Dumbledore and the suspicions about Draco being a Death Eater, the adult often refused to explain to Harry that the situation was under control. This only led Harry to make even more risky decisions. While everyone enjoys a good “Sirius” pun, if Harry had come to Lupin with his worries about the Grim, he likely would have only been met with jokes.

Logic Doesn’t Seem To Be A Wizarding Value

Harry went to Hogwarts to learn from the best, and his decision to create an organization called Dumbledore’s Army proves that he did. Members of the wizarding world seemed to love to do things entirely outside of logic, and Harry seemed to have picked that up from his witch and wizard teachers.

When Harry was the most wanted person in the wizarding world, Hagrid threw a “Support Harry Potter” party and got attacked. When Voldemort needed Harry transported to the graveyard, he had his followers jump through hoops to get Harry to win a tournament and touch a trophy, when turning a piece of homework into a Portkey would have been much easier. In the end, the wizarding society in Harry Potter disturbingly didn’t seem to think things through— Harry fit right in.

It certainly seemed that Dumbledore could have put a Time-Turner to much better use than rescuing a Hippogryph, but that is just the surface of the issue surrounding the time traveling devices. For example, the decision to allow a 14-year-old girl to use a Time-Turner to attend extra classes seemed highly irresponsible, especially given the evidence in Harry Potter that Hermione had minimal respect for the rules

Cursed Child revealed just how much damage could be done by changing even something small in the past. Combine this with the fact that a group of 5th-year students could easily break into the Ministry of Magic and gain access to the government’s entire store of Time-Turners, and it seems that it might have been for the better that they all got destroyed.

There Is Far Too Much Trust

Harry can be forgiven for trusting Hagrid right off the bat. He had been raised with an abusive Muggle family, and the news that he was finally going to be able to get away from them was likely too joyful for Harry to give into doubt. However, this unearned trust from Harry and others in the wizarding world continued in far more damaging ways.

It didn’t matter how many times the characters in Harry Potter were fooled; they continued to trust blindly. It seems like after Quirrell, Lockhart, Riddle, Pettigrew, Crouch, Fudge, Umbridge, Bagman, Malfoy, and many more, the wizarding world would start to think twice before believing that someone has good intentions.

While Harry did listen in on many private conversations with the help of his Invisibility Cloak, he certainly could have done a lot more damage had he wanted to. This exposes another major issue within wizarding society: the concept of privacy is barely recognized.

With the ability to Apparate, witches or wizards can go pretty much anywhere they want. Potions like Verituserum allow someone to sneakily make another spill all their secrets, and several other spells and curses completely remove a person’s autonomy. In the end, living in a magical society ensures invasive behavior.

Safety Isn’t Even An Afterthought

The real world (or Muggle world) places great value on safety. Anything dangerous is typically roped off, and extreme rules and regulations ensure that several unsafe practices, especially in schools, are forbidden.

However, every Harry Potter fan knows that safety is barely a concept in the wizarding world, despite Dumbledore’s displays of concern towards his students. Not only are dangerous professors purposely hired in Harry Potter year after year, but Harry was forced into participating in the Triwizard Tournament, which had previously been banned due to student deaths. Even detentions were dangerous, as Harry’s very first saw him face to face with Voldemort in the Forbidden Forest.

Not only are there virtually no safety precautions taken in the wizarding world, but the laws and regulations in place are laughably inconsistent. There is a rule that a student’s guardian must sign for them to go to Hogsmeade, but this seems ridiculous considering Harry was taken to Hogwarts against the Dursleys’ wishes to begin with.

The list of examples of asinine rules goes on and on. Students are forbidden from entering the Forbidden Forest but are sent in alone as part of detention. Boys cannot enter the girls’ dormitories, but girls can enter the boys’. Wizards need a license to Apparate, but flying professional racing brooms at any age is entirely okay.

The Weird Limits To Magical Medicine

Since every witch and wizard is equipped with a wand, it seems that life in the wizarding world would be considerably more convenient than it is. Not only are quills and ink, parchment, and flaming torches commonplace, but the world of medicine seems to be highly lacking.

When Harry has all the bones removed from his arm, he can take a potion to grow them all back. However, even powerful wizards like Dumbledore wear glasses. Since even Muggles have discovered ways to correct a person’s vision surgically, it seems like a world that can regrow entire limbs could manage something better than lenses.

The Wizarding World Is Far From Fair

In Chamber of Secrets, Harry discovers that Argus Filch is a Squib. This means he was born to a magical family but has no magical ability. This was such an unimportant detail that it never even made it into the movies, but it reveals yet another issue with wizarding society.

A magical caretaker could have cleaned up messes with the swish of a wand. Instead, Filch had no choice but to use old-fashioned manual labor to clean up a castle full of magical messes. Although no one has much love for the man, it seems unfair that he would be stuck with that kind of job.

The Statute Of Secrecy Is A Mess

Harry got burned by the Statute of Secrecy a few times throughout Harry Potter. Not only did he get blamed for the actions of a house-elf, but he was expelled for using a life-saving charm in front of his cousin, Dudley. To make matters worse, the Ministry sent a talking letter to Harry, which announced his expulsion in front of the same Muggle family.

This is especially ridiculous considering Dumbledore had sent hundreds of letters to fly around the wizarding home and that the Weasleys had once blown up the Dursley’s living room. The law seems a little all over the place and only serves to punish those the Ministry already has issues with.

NEXT: 9 Dolores Umbridge Quotes From Harry Potter That Proves She Wasn’t All Bad

Angel is a Senior List Writer at Screen Rant, specializing in Harry Potter, Lord of the Rings, and other book-to-screen content. She holds a bachelor’s degree in language interpreting and is passionate about all things culture, linguistics, and communication. Currently, Angel lives in Michigan with her husband, three sons, two cats, and a rambunctious dog.
Angel is deeply in love with any form of storytelling, whether it be books, movies, TV Shows, or video games. She loves diving deep into lore (the more complex, the better) and finding the hidden meaning behind a character’s smallest actions. Even more than that, Angel loves sharing her finds with anyone who is willing to listen, which makes Screen Rant the perfect place for her.
In her free time, Angel can typically be found binge-watching comfort shows, hanging out with her guild of nerdy friends, playing any Zelda game, or teaching her kids about the fantastical worlds of fiction.
Find Angel on Twitter: AnjuShiSki