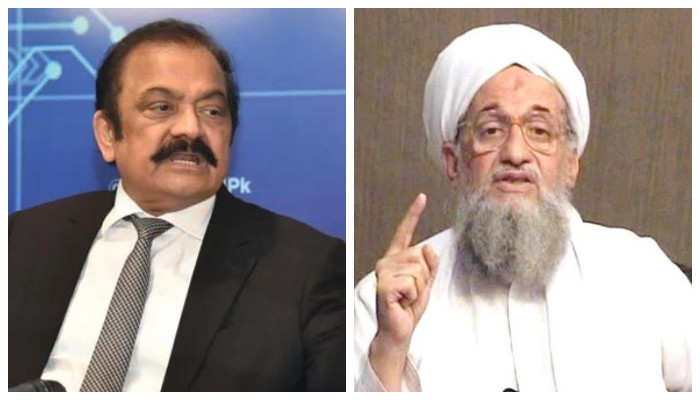 ISLAMABAD: Federal Interior Minister Rana Sanaullah on Wednesday said that the drone which targeted and killed Al Qaeda leader Ayman al-Zawahiri did not fly from Pakistan.

“You know how Ayman al-Zawahiri was killed and where he was [residing],” he posed, adding this matter should be discussed between the US and Afghanistan.

Speaking to Geo News, talking about the situation of regional peace, the minister added that peace in Pakistan will only prevail if Afghanistan remains peaceful.

Earlier, the Foreign Ministry also issued a statement after the killing of the militant group’s top leader.

Addressing media queries regarding the crucial event, the ministry’s spokesperson said that Pakistan’s role and sacrifices in the fight against terrorism are well-known.

The statement by the foreign ministry added that Pakistan condemns terrorism in all its forms and manifestations.

The US, on July 30, killed Al-Qaeda chief Ayman al-Zawahiri by targeting his hideout using a drone. Zawahiri was one of the world’s most-wanted terrorists and suspected masterminds of the 9/11 attacks.

During a televised address on August 2, US President Joe Biden said the strike in Kabul, Afghanistan, had been carried out on Saturday. “I gave the final approval to go get him,” he said, adding that there had been no civilian casualties.