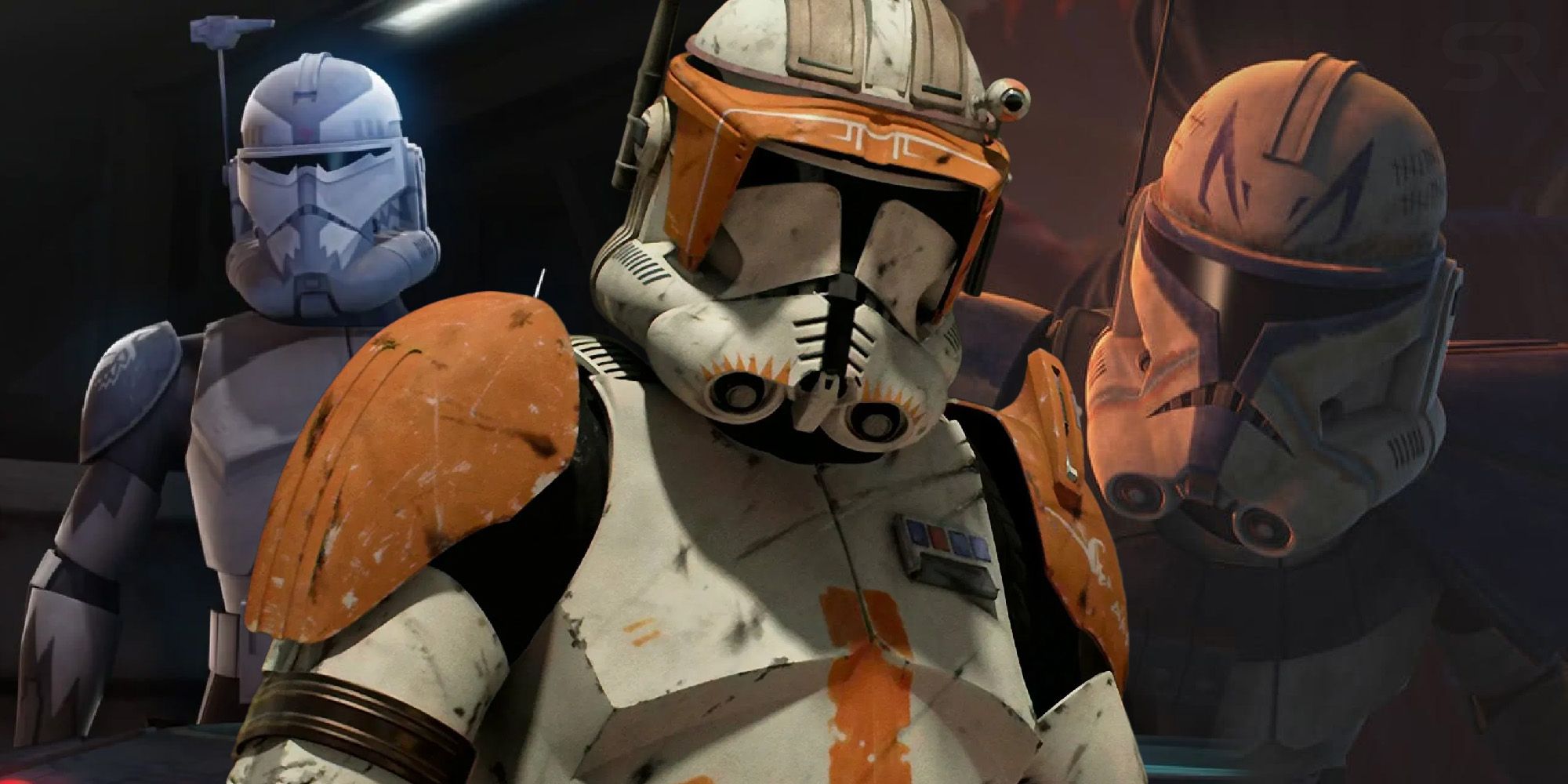 Star Wars Episode III: Revenge of the Sith features one of the most tragic third acts in any of the Star Wars films as Anakin Skywalker succumbs to the dark side of the Force and the Jedi Order falls in what is now called the Great Jedi Purge. The systematic extermination of the Jedi served to strengthen the rise of the First Galactic Empire.

In order to efficiently eradicate the Jedi, Chancellor Palpatine ordered clone commanders across the galaxy to fire on their own Jedi generals. The vast majority of commanders followed Palpatine’s infamous Order 66, killing the Jedi with whom they had served side by side during the Clone Wars.

Commander Bacara, otherwise designated as CC-1138, was the leader of the 21st Nova Corps and served under Jedi Master Ki-Ad-Mundi, who was first seen as a member of the Jedi Council during The Phantom Menace. Bacara served as an ARC-Trooper before being promoted to the rank of Commander during the Clone Wars.

Bacara accompanied Master Ki-Adi-Mundi in the Third Battle of Mygeeto in the final days of the Clone Wars. The commander received word from Darth Sidious to execute Order 66 shortly before leading an assault alongside Mundi. During the charge, Bacara and his men drew back, allowing the Jedi to run ahead of them, where they shot and killed him in cold blood.

Commander Keller was a unique clone leader during the Clone Wars, who was given his own special unit and was known for his distinct and unusual design. He makes his first and only appearance in the Star Wars: Republic comic book, acting as a major character in issues #79-80, an arc titled “Into the Unknown.”

Keller and his men were working with Jedi Generals Simms, Hudorra, and Na when the order to execute the Jedi came from the Chancellor’s office. While they are able to quickly dispatch General Simms, Hudorra and Na manage to evade the clones’ grasp, escaping the slaughter.

Commander Neyo, otherwise known as CC-8826, was a member of the Clone Army serving under Jedi Council member Stass Allie. Presiding as commander over the 91st Reconnaissance Corps, Neyo failed to make the same connections with his Jedi General that other clone commanders did during the Clone Wars.

Neyo and his men fought under Master Allie during the Outer Rim raids during the final days of the Clone Wars, eventually traveling to Saleucami on a mission to defeat a rising Separatist Threat on the planet. However, while embarking across the planet’s wastelands on speeder bikes, Neyo received the command to execute Order 66 and, alongside his troops, drew back and fired on Master Allie, causing her to crash and die.

Clone captain 10/994 was given the nickname Grey by his fellow soldiers in the battalion serving under Jedi Master Depa Billaba, a member of the High Jedi Council during that time. Grey fought alongside Billaba for the majority of the Clone Wars, even becoming one of the few survivors of her initial battalion.

At the end of the Clone Wars, Grey led Billaba’s battalion on the planet Kaller, where he eventually received the command to kill his general. Acting on these orders, Grey and his men managed to kill Billaba, though her Padawan, Caleb Dume, escaped. Grey would eventually capture Dume, though he would later resist his programming and die to save the young Jedi refugee.

CT-55/11-9009 was a clone pilot and captain in the Grand Army of the Republic during the Clone Wars. Otherwise known as “Jag,” this clone served under the rarely depicted Jedi Master Plo Koon, mainly participating in starfighter missions during the galactic conflict.

Jag served as a wingman for Master Koon during a mission over Cato Neimoidia. After receiving a transmission from Chancellor Palpatine, however, Jag fired on Plo Koon’s starfighter, causing it to crash into a nearby spire and explode.

RC-1013 was a clone soldier affectionately nicknamed “Sarge” by his brothers-in-arms. He appears in the comic series Star Wars: The Clone Wars Adventures by Ryan Kaufmann as a minor character in the third and fourth volumes.

Sarge and his men, known as Aiwha Squad, were serving under the command of Jedi General Traavis when they received word from Chancellor Palpatine to execute Order 66. Without a second thought, Sarge orders his men to kill Traavis, which they do with ease.

Commander Crane is a minor clone character in the Star Wars franchise. Mentioned in the canon novel Dooku: Jedi Lost by Cavan Scott, Crane is seen in flashbacks as a leader in the One-Eighty-Fourth Attack Batallion under the command of Jedi General Jor Aerith.

In a Force vision seen by Count Dooku himself, Crane is depicted following his orders during the events of Order 66, killing General Aerith with the help of his fellow soldiers. What became of Crane or the other clones that betrayed Aerith is unknown.

Sergeant Fox, also designated as CT-0000/1010, was a member of the 501st Legion in the Grand Army of the Republic, a unit with the rare distinction of marching into the Jedi Temple by the newly anointed Darth Vader during the events of Order 66, wiping out the Jedi within its walls.

Fox is given command of a group of clones to guard a Jedi hangar on Coruscant during the Great Jedi Purge, where he is confronted by Alderaanian Senator Bail Organa. As things grow heated with the senator, Jedi Padawan Zett Jukassa appears, killing several of Fox’s men. Fox and the other clones manage to kill the Padawan, though they fail to apprehend Organa.

Commander Salvo was a member of the 32nd Air Combat Wing in the Grand Army of the Republic and one of the coolest clones in the Star Wars franchise. He appears in the James Luceno novel Dark Lord: The Rise of Darth Vader, which includes an account of the events of the Great Jedi Purge.

In the novel, Salvo is depicted under the command of Jedi General Roan Shryne at the onset of Order 66. Though Salvo and his men are able to kill several Jedi after Palpatine’s order, some of the clones in the battalion resisted the command, leading to havoc among their numbers and Shryne’s temporary escape. The Jedi Knight would eventually be hunted down and killed by Darth Vader while Salvo dealt with the mutiny in his own ranks by killing any clones dissenting to the extermination of the Jedi.

Commander Bly, also known as CC-5052, was an ARC trooper and commander over the 327th Star Corps in the Army of the Grand Republic. Serving under Jedi General Aayla Secura for a large portion of the Clone Wars, Bly formed a close bond with his superior.

While accompanying Secura on a mission to Felucia, Bly received word from Chancellor Palpatine himself to kill his commanding officer. Despite his longstanding friendship with Secura, Bly was unable to resist the inhibitor chip implanted in his brain, which led him and his men to fire on Secura, shooting her repeatedly in the back, killing her, and marking one of the most tragic betrayals in the infamous Great Jedi Purge.

NEXT: 10 Jedi Masters And The Most Valuable Lesson They Could’ve Taught Luke Skywalker

Jordan Iacobucci is an avid reader and movie fan and has been since childhood. Jordan is known among his friends as the Marvel and Star Wars nerd, and even wrote a thirty-page college dissertation about Spider-Man! He obtained an English degree from Dominican University and lives outside Raleigh, North Carolina with his family. His other interests include working with children, reading, and music.