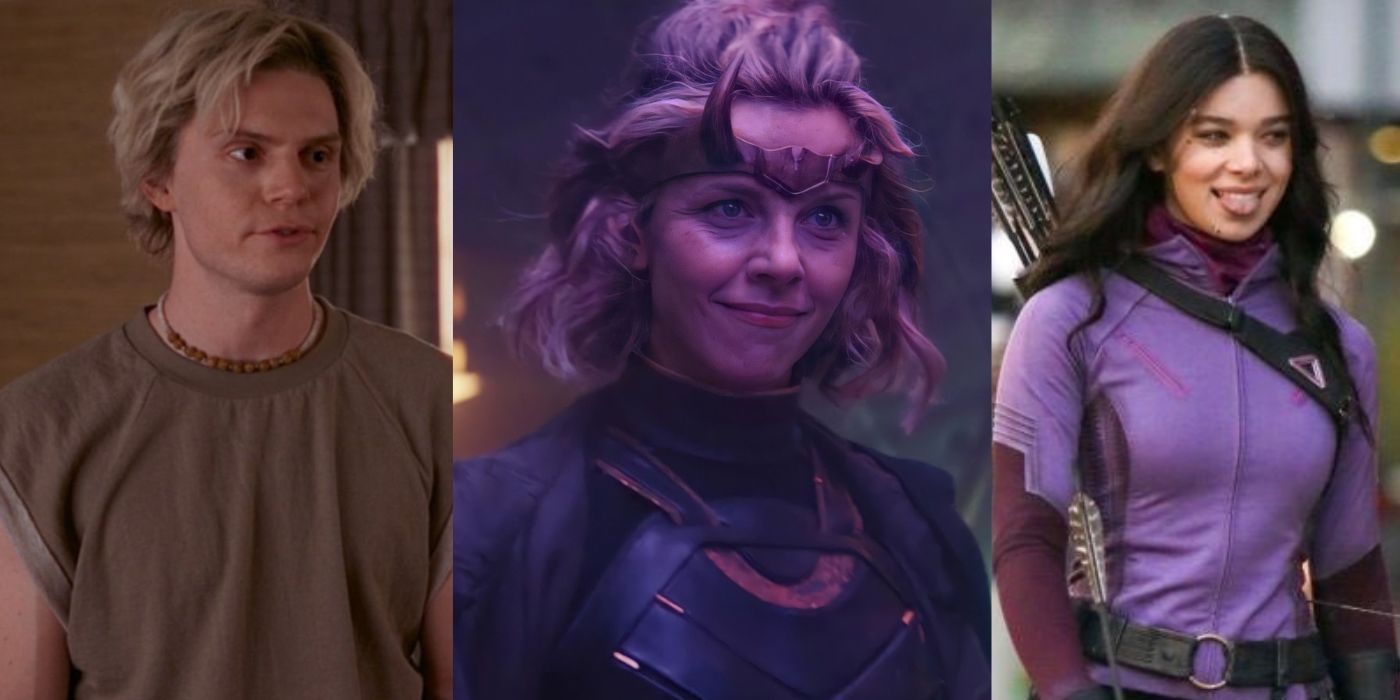 The latest trailer for She-Hulk promises a comedic take on the character when she arrives on Disney+ on August 17. The shows on the platform have seen returning funny favorites such as Jimmy Woo and Darcy Lewis in WandaVision, but were also happily surprised with several of the new additions on these series.

While waiting for She-Hulk and more, fans have been expressing their gratitude for the funnier moments in the shows, often provided by comedic sidekicks or loveable main characters. From Kate Bishop to Bucky’s therapist, several characters have made their mark through funny moments and inspired several memes and tweets afterward.

Kate Bishop stole the show for many fans in Hawkeye. She’s funny, quirky, and many fans saw themselves in her. Her reaction to meeting Hawkeye, her childhood hero, was equal parts endearing as it was hilarious.

RELATED: 10 Best MCU Episodes On Disney+, According To IMDb

Kate carries on her antics throughout the series, often relying on dumb luck to get her out of situations. Her interactions with Yelena are especially funny, given how different these two characters are. Fans are eager to see Kate again since they fell in love with her humor and light-hearted nature.

Christina Raynor (The Falcon And The Winter Soldier)

Although Christina was a minor character in The Falcon And The Winter Soldier, she deserves a shout-out. Not only was she able to handle Bucky’s sarcasm and stubbornness, but she gave it right back to him.

Christina also orchestrated one of the funniest moments of the series, which saw Sam and Bucky practicing a couples therapy technique in order to get their true feelings out. The scene started off as hilarious but ended on a sincere note. All in all, Christina was a scene stealer every time she was on screen.

Agatha’s character was one of the most interesting to watch unfold throughout the series. Many fans had theories about her from the beginning, and their distrust only grew as each episode dropped. She was also often responsible for several memes that circulated the internet between each episode’s release.

Despite being revealed as the show’s main villain, Agatha had some pretty funny moments. She was always quick to comment on something or drop a one-liner that left viewers laughing. She never missed the tone of the episode either, easily switching between TV eras. It’s because of Kathryn Hahn’s comedic timing that Agatha worked so well.

Marc Spector, a mercenary and all-around violent character, had some unexpected funny moments that surprised fans. He originally seems like the more serious personality, and although he has his moments, he also has a lighter side. He’s often seen arguing with himself and those around him.

RELATED: Every MCU Disney+ Series (So Far), Ranked By Rewatchability

Fans have expressed their appreciation to Oscar Isaac for his careful portrayal of Marc, who has Dissociative Identity Disorder, while also keeping a light-hearted nature about him. Marc may not have been the funniest character to begin with, but as the series goes on, he loosens up and delivers some pretty iconic moments.

Much like her variant, Sylvie is quick-witted and her sarcastic nature and determination combine to make some funny scenes. Despite being a variant of Loki, she and he disagree on several things, which also had viewers entertained and humored while watching.

Sylvie is the first person Loki has met who matches his intelligence and humor, which leads to his confusion. The two are almost polar opposites in a lot of things, for example, Loki needs to be in control, but Sylvie hates it. This creates some pretty funny arguments between the two of them as they learn to work together.

Sarah Wilson (The Falcon And The Winter Soldier)

As the younger sister of Sam Wilson, Sarah is clearly the brains of the family. Sarah’s character is only explored at a surface level in the series, but that doesn’t mean she didn’t have her time to shine.

She often called out Sam for his reckless behavior, leading to the two bickering like the siblings they are, a familiar and funny scene for many viewers. She was also unafraid of Bucky, much to his surprise. She only had a few scenes, but her one-liners were memorable as was her presence, and slight flirtation with Bucky.

Evan Peters’ portrayal of Ralph sparked a massive fan reaction online. It was a direct relation to his portrayal of Wanda’s dead brother, Quicksilver, in the Fox X-Men Franchise.

Ralph was modeled off of characters like Nick Moore from Family Ties and Joey Tribbiani from Friends. He provided a much-needed breath of fresh air as the series got more serious, his one-liners had fans in stitches while laughing, and his appearance inspired several memes online. His character was multi-layered and complex, both for the future of the MCU and Wanda, but he nailed his comedic relief role perfectly.

Much like Kate Bishop, Kamala is a superfan of the Avengers, especially Captain Marvel. For many fans, they saw themselves in Kamala, given her eagerness to learn about the Avengers and desperation to be like them. She was relatable, which is often what makes a character funny.

RELATED: The Best (& Worst) Episode Of Each MCU Disney+ Series, According To IMDb

Kamala is just a teenager and has many awkward teenage moments that left fans laughing. From failing her driver’s test for almost unbelievable reasons to her general dorkiness, she was a hit with fans. Alongside her best friend, Bruno, the chaotic duo had several hilarious moments that were reminiscent of teenage friendship and the fun of being young.

Bruno is Kamala’s best friend, the two have been through everything together. Even after her powers were revealed, Bruno stood by her side. His loyalty to his best friend saw the two of them in certain situations that left fans laughing.

He’s unafraid to be goofy with Kamala and the two of them together are seemingly unstoppable. Fans have commented about how likable the duo is, and how they’re reminiscent of teenager best friends. He challenges Kamala when she needs it but is also there for a good laugh or distraction if something’s gone wrong.

Another one of Marc Spector’s alters, Steven Grant is everything Marc isn’t. He’s mild-mannered, quiet, and a little meek compared to Marc and Jake. When Marc and Steven are made aware of each other’s existence, there’s initial backlash from each other, but it’s eventually played off well and the two find humor in the situation.

Steven’s admiration for Layla is something that had fans entertained, given they had a few awkward moments. It is something that also causes bickering between himself and Marc, with the arguing between the two being one of the funniest running jokes throughout the series.

NEXT: Best Disney+ MCU Finale Episodes, Ranked According To IMDb

Why Girl Meets World Was Canceled After Season 3

Born in the USA, but living in England, Emily De Vogele is a freelance writer for Screen Rant. She is currently completing her Masters degree in Journalism, and already holds a Bachelors degree in English Language and Linguistics. She has previous experience as a freelance writer and editor for multiple publications across several fields. Writing has always been her true calling.

Having been introduced to Star Wars from a young age, she’s always had a soft spot for the geekier movies (who doesn’t want to wield a lightsaber?). Emily’s also been following the MCU for years, with her favourite movie being Captain America: The Winter Soldier, and subsequently her favourite character being Bucky Barnes. Her other hobbies include reading, spotting Easter Eggs and diving into fan lore and theories online. She covers a wide range of movies and TV shows, for anything nerdy she’s your girl. You can find her on Twitter at emilydevogele.