10 Underrated Horror Anthologies (And Where To Watch Them) 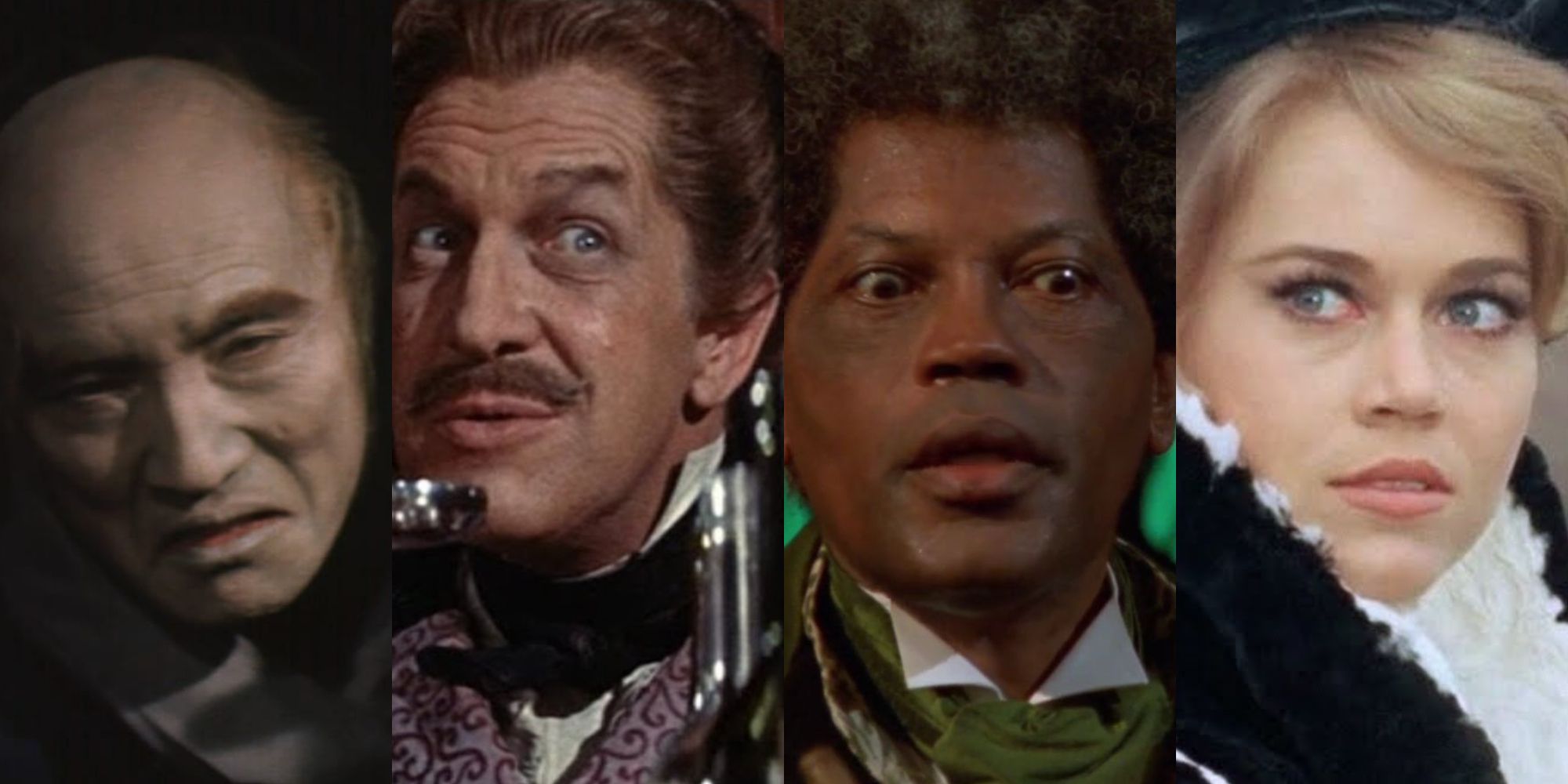 You’re in a deserted cemetery late at night. A gust of cold wind chills you to the bone. You could have sworn your friends were just there, but you’ve lost sight of them. Up ahead, there is a crypt, the door slightly ajar. You walk inside, and the door slams shut behind you. A skeletal figure pulls out a book, ushering you to stay silent. It’s scary story time!

Horror anthologies like Trick ‘r Treat, Creepshow, and Tales From The Crypt are beloved staples of the genre, drawing from classic EC Comics tropes to create something timeless. Yet, they are far from the only films to utilize the format successfully, and indeed, plenty of horror anthologies go fully off the rails in doing their own thing. These films may never grab the public’s consciousness in quite the same way as a horror megahit like the V/H/S franchise does, but they’re still more than worth your time.

Taking inspiration from three of Edgar Allan Poe’s short stories, “Metzengerstein,” “William Wilson,” and “Never Bet The Devil Your Head,” Spirits of the Dead captures the eery qualities of Poe’s work while exhibiting the highly unique creative approach of its directors. “Metzengerstein” follows a cruel baroness who becomes obsessed with a demonic horse, “William Wilson” reimagines the classic Poe story of doppelgangers as a morality tale about the dangers of misogyny, and “Toby Dammit” is a 1960s-flavored examination of fleeting celebrity.

Spirits of the Deadis a bit of an anomaly as it features adaptations by three famous directors (Roger Vadim, Louis Malle, and Federico Fellini) and a star-studded cast (featuring actors like Jane and Peter Fonda, Alain Delon, Brigitte Bardot, and Terence Stamp), yet it has largely fallen by the wayside. Even Poe megafans rarely reference this striking and strange film, but it’s well worth seeking out for horror fans who like a bit of the surreal. Spirits of the Dead is available to watch on The Criterion Channel.

Easily one of the most creative uses of the anthology format in recent memory, Southbound doesn’t rely on the classic horror host format and instead shows a complicated central figure tormented by regret attempting to flee bizarre, skeletal floating figures. Throughout the stories, these figures stalk and terrorize the revolving cast.

With a framing story written and directed by the three-person collective Radio Silence and segments from creators like Roxanne Benjamin, David Bruckner, and Patrick Horvath, this should qualify as a must-watch for any horror fan. Southbound is available to watch on Tubi.

When a group of intimidating drug dealers finds themselves in a mortuary after hours in hopes of scoring drugs from the mortician, they are surprised to be subjected to a series of vignettes. Short stories take subjects from real-life issues such as a cop plagued with guilt after watching a murder by his coworkers, a teacher hoping to help a young boy that is terrorized by his father, a racist political figure destroyed by his own hubris, and high mortality rates among young drug runners.

Executive produced by none other than Spike Lee, this Rusty Cundieff venture remains polarizing to this day. Intentionally playing on triggering themes from political racism, police brutality, child abuse, and predatory drug dealers, this remains one of the most relevant horror films of its era, even with its regular dips into comedy. Tales From The Hood is available on Starz.

An architect arrives at a house where he’s been asked to advise the homeowner in regard to renovations only to discover a group of guests that are eerily familiar to him. The collective begins to share a number of personal stories, all with a distinctly horror-flavored edge.

Related: 10 Other Vertigo Comics That Would Make Great TV Series After ‘The Sandman’Created during a time when horror films were actually banned from production in Britain, this anthology remains unsettling all these eight or so decades down the line. Best-known for the evil ventriloquist’s dummy that closes out the tales, the unique framing story and segments like “The Hearse Driver” and “The Haunted Mirror” are likewise unforgettable. Dead of Night is available to watch on Amazon Prime Video.

This criminally-underrated animated anthology kicks off with a segment by renowned French comics’ legend Blutch, whose tale features a sadistic man unleashing his dogs on unsuspecting people across the countryside. The brutality continues in a bizarre story by Black Hole creator Charles Burns, who tells of a lonely young man who begins a relationship with a woman who slowly becomes monstrous.

The film continues to escalate in violence and originality on equal terms, making it a fascinating outing that is difficult to shake. Utilizing some of the world’s top comic book artists and graphic designers to tell a distinctly haunting series of stories and in striking black and white, this is one of the most unique takes on the format ever to hit the screen. Fear(s) of the Darkis available to watch on Amazon Prime Video.

What critically-acclaimed cult film can you watch Julianne Moore, Steve Buscemi, and Christian Slater share scenes and act their faces off? Why, Tales From The Darkside: The Movie, of course! Okay, maybe except for the critically-acclaimed part. While it might not have garnered its cast any Oscar noms, this film, based on the equally underrated George Romero-helmed TV series, is one of the most entertaining anthologies of the 90s.

With a framing story following the great Debbie Harry cast as a modern-day witch from the fairytale Hansel & Gretel, she tells a series of stories to a young boy while she waits for her oven to heat up so that she can, well, eat him. Tales From The Darkside: The Movie is available to watch on HBO Max.

Speaking of Edgar Allan Poe, nobody rates as a bigger fan of the “master of the macabre” than Japanese horror writer Edogawa Ranpo, whose name is an homage to the writer. A true fan who encouraged new works in the mystery and horror genres in Japan, his own writing is known to emulate the classic tropes set forward by his faves while going well off in his own direction.

Related: Underrated Body Horror Films Not Directed by David CronenbergThese shorts, all adaptations of Ranpo’s works, are extreme, bloody, visceral, and haunting, much like the stories on which they are based. Particularly striking is “Caterpillar,” focusing on a man who returns from war gravely injured only for his wife to turn on him, torturing him for sport. Rampo Noir is available to rent on YouTube.

It has often been said (by us) that Vincent Price is the GOAT, and in few places is that more evident than in the Roger Corman Poe cycle, a series of eight films (seven of them starring Price) loosely based on the works of Poe. The series runs the gamut, with some entries, like House of Usher, still packing a strong horror punch while others, like The Raven, relying mostly on improv and horror comedy. Tales of Terror is perhaps the most potent mix of both.

Taking inspiration from “Morella,” “The Black Cat,” and “The Strange Case of M. Valemar,” these stories also feature greats like Peter Lorre and Basil Rathbone, but it might go without saying that Price is the star. Tales of Terror is available to watch on Paramount+.

Four stories, unrelated to one another, retell classic Japanese folktales. “The Black Hair” shows an unfaithful man attempting to return to his long-suffering wife only to discover it’s much too late. “The Woman of the Snow” tells of travelers who see visions of a frozen woman in a snowstorm. “Hoichi the Earless” is the story of a young musician who is haunted by otherworldly spirits, and “In a Cup of Tea” is about a writer who sees an ominous figure in a cup of tea.

Considering the fact that it’s fairly widely available and acclaimed as one of the greatest classic Japanese horror films ever made, calling Kwaidan “underrated” might seem like a stretch. Still, anything short of an annual parade celebrating its greatness feels like a crime. If you haven’t seen it yet, run, don’t walk, to the nearest exit. Kwaidan is available to watch on HBO Max.

We’re back again for another tale of terror with Vincent Price, who not only introduces but also stars in these three stories. Based on two stories and a novel by Nathaniel Hawthorne, this is a handy, lesser-known but scarier companion to the above-mentioned Tales of Terror.

All of these stories are a lot of fun. The possible highlight of the bunch is “Rappaccini’s Daughter,” in which a recluse played by Price treats his daughter with a poisonous plant extract to make her lethal to potential suitors. Twice-Told Tales is available to watch on Paramount+.

Keep Reading: Underrated Horror Movies of the 1970s (and Where to Stream Them)

10 Memes That Perfectly Sum Up Hagrid As A Character

Slope Wallets Assumed to Be the Culprit of the Solana Attack