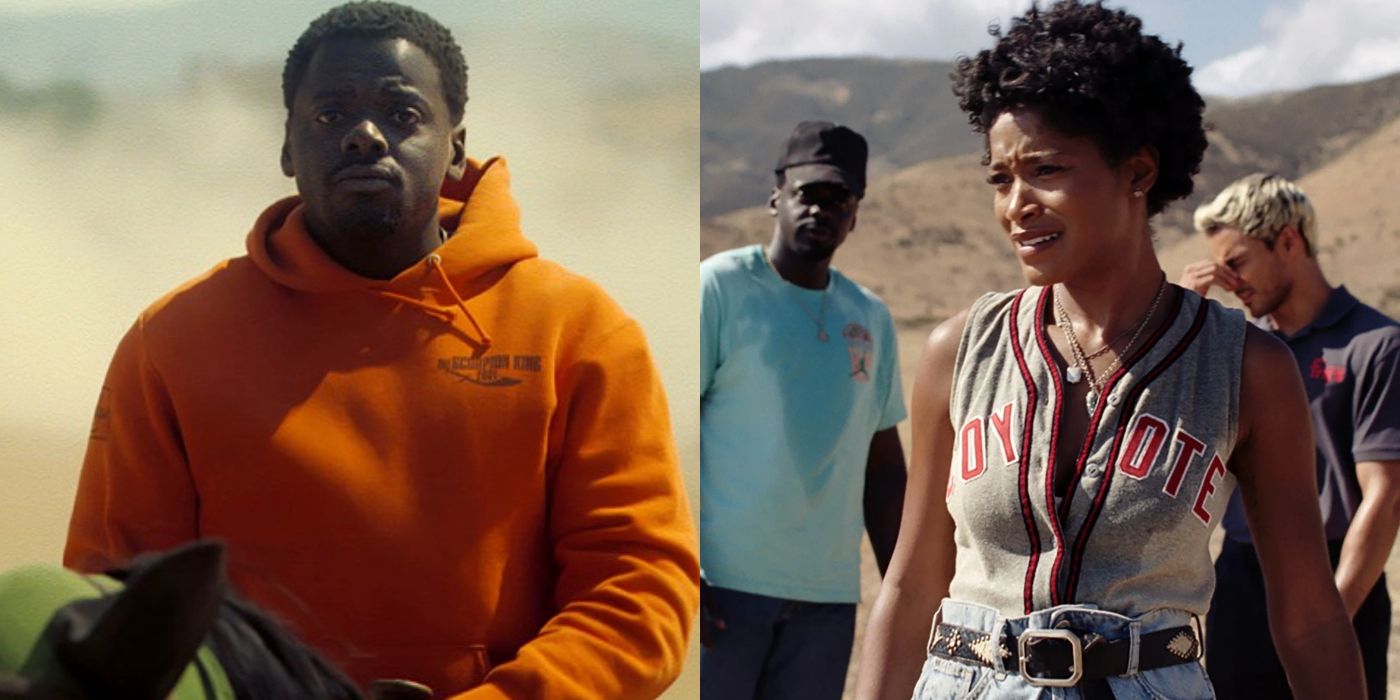 With Jordan Peele’s third film, Nope, now in theaters, it appears that the director had foreshadowed the film’s plotline eight years ago. His dream – nightmare really – about a baby chimp attack likely formulated the character arc for Jupe, allowing Peele to go all out on the shock factor with the horrifying opening scene. It continues to show Peele’s creativity and unique style when crafting his horror creations while also bringing in a hint of comedy that sets his storytelling apart from other visionaries.

Though this is only Peele’s third directorial film, people may have noticed a few recurring themes and trademarks in Nope that have also featured in Us and Get Out. From title drops to the imagery of scissors, there seem to be some permanent ideas in Peele’s head that he puts into his films for continual analysis.

First appearing as the weapon of choice for the doppelgangers in Us, the gold scissors make another quick appearance in Nope. Eagle-eyed viewers will see the exact same ones on Jupe’s desk.

Although the gold scissors are not dramatic devices in Nope as in Us, the fact Jordan Peele chose to select those very same ones for both films is a good hint that the arts and crafts tool may continue to reappear in future Peele movies. If anything, the gold scissors may serve as an easter egg as a node to Us.

Jordan Peele has a wide ranging musical taste and packs his films with score and soundtrack from a variety of genres. Each of his films have so far used one particular song as either the main motif to the story or the focus of the film’s marketing.

Nope has a remixed version of “Sunglasses At Night” by Corey Hart that initiates the story’s climax. Get Out uses “Redbone” by Childish Gambino, which openly states some of the film’s themes. And the trailer for Us famously slowed down Luniz’s “Got 5 on It“ for extremely creepy effect.

One of the less highlighted strengths of all Jordan Peele movies is the sound design. Though some unpopular opinions suggest that Peele’s movies are not subtle, the sound design with the distinct sounds is an example of the subtle details for thematic and suspenseful intent.

The sound of a spoon clinking around a teacup is the key to hypnotizing Chris Washington in Get Out. The leader of the doppelgangers in Us can only speak in a croaking, unsettling voice. And in Nope, the screams of captured animals and people are both horrific and a brilliant design choice to indicate to the main characters where Jean Jacket is.

Some of the fun whenever a Jordan Peele film comes out is finding out what his catchy film titles mean exactly and when they are going to pop up in the film. They’re often both telling of the story’s theme as well as a pivotal line.

In Get Out, the title is shouted as a warning to Daniel Kaluuya’s character. In Us, the doppelgangers make constant reference to “us,” the forgotten people undergrounds. And in Nope, the title is used for humorous effect multiple times by characters when coming face to face with the film’s antagonists.

The main characters in Jordan Peele’s movies are very nuanced and real protagonists, and it makes it easy for the audience to relate to and care about what happens to them throughout the film. Even Nope turned out to have likable characters, like the Haywood siblings despite their differing personalities. Most of the other characters in the film are equally human, but Peele likes to include at least one over-the-top character to exact some true horror gruesomeness on.

There are a number of over-the-top characters in these films: the brother in Get Out, Elisabeth Moss’s family in Us, and a TMZ reporter in Nope. It’s a social discussion of the more darker side of humanity, which Peele continues to highlight in all three movies. Of course, this is more so the case for Nope, with a story focused on many characters trying to profit off the UFO. Some characters go to the extreme like the TMZ reporter, so as a consequence, Peele gives these characters appropriately gnarly fates.

Although most horror films have the same cliché with a group of friends or strangers stuck in a horror event, Peele has opted to go in a different direction. The main characters beset by the film’s plot have recently been loving Black families.

With a nuclear family in Us and the brother-sister combo in Nope, they always solve their problems on their own, becoming the smartest characters in the movies. Whether the tethered or Jean Jacket, these families understand the terrifying situation at hand, where they work together to outsmart them, and their love for each other becomes their motivation to fight for survival. It’s these pursuits that make the characters more admirable, especially as OJ and Emerald become closer siblings in their attempt to capture the Oprah shot. Both films end in multiple badass moments that show the family banding together to defeat the evil.

There seems to be a common theme that appears in most Peele movies, which is that characters are somehow trapped in a specific location and find difficulty escaping. It becomes more of a deep-rooted fear, but it also enhances the horror factor and becomes the character’s main mission in their pursuits and survival.

The victims in Get Out are hypnotized, and their consciousness is jailed in the “Sunken Place,” which is more subtle with the subconscious mind being trapped than its physical state. The doppelgangers in Us are imprisoned and forgotten underground, losing their voices. And in Nope, a paying crowd is forced, immobile into one of the most horrifying places imaginable.

The social commentary in Peele’s movies, Get Out and Us, has been well discussed, and Nope will be no exception. But there is a common theme in Nope that has been alluded to in previous films: violence against animals. Peele wants to highlight the issue regarding the historically poor treatment of animals in Hollywood, and Nope is his main essay on the topic, but he has touched on similar points in earlier movies.

A deer is hit by a car early in Get Out, rabbits are bred to be eaten raw in Us, and a host of animals are sacrificial lambs throughout Nope. Though the deer scene foreshadowed Chris’ salvation in Get Out, the problems regarding animal abuse are more evident in Nope, where harmless horses are being used as bait. This issue becomes more prominent in scenes with Gordy, an exploited chimp who loses his cool in a middle of a set.

Despite most of the Peele catalogue occurring during the night, some of the scariest scenes take place during the day. Daytime is supposed to be safe, and Peele often counters that notion by scaring the audience with the sun out.

Whether it is an alien abduction in Nope, a child’s immolation in Us, or a meltdown at a brunch in Get Out, Jordan Peele shows the scenes in bright daytime yellow. The main and final act in Nope takes place heavily in the daytime as OJ, Emerald, Angel, and Antler must grab the perfect image of Jean Jacket. Every feature of every character is visible, and the scene has a more scary effect for it. It shows one of the more unique storytelling aspects of Peele’s vision, demonstrating that horror is not just constricted to the nighttime.

NEXT: Opening Scene and Every Title Card In Nope, Explained

Guardians of the Galaxy 3 Villain Details Revealed By Star

Zach Moser is a 28 year old Philadelphia native who loves films, television, books, and any and all media he can get his hands on. Between his role as a college fundraiser, catching up on the latest tv shows, films, and sports, Zach can be found exploring the hidden restaurants and bars found throughout the city.