How Old Will & Elizabeth Are In Each Movie 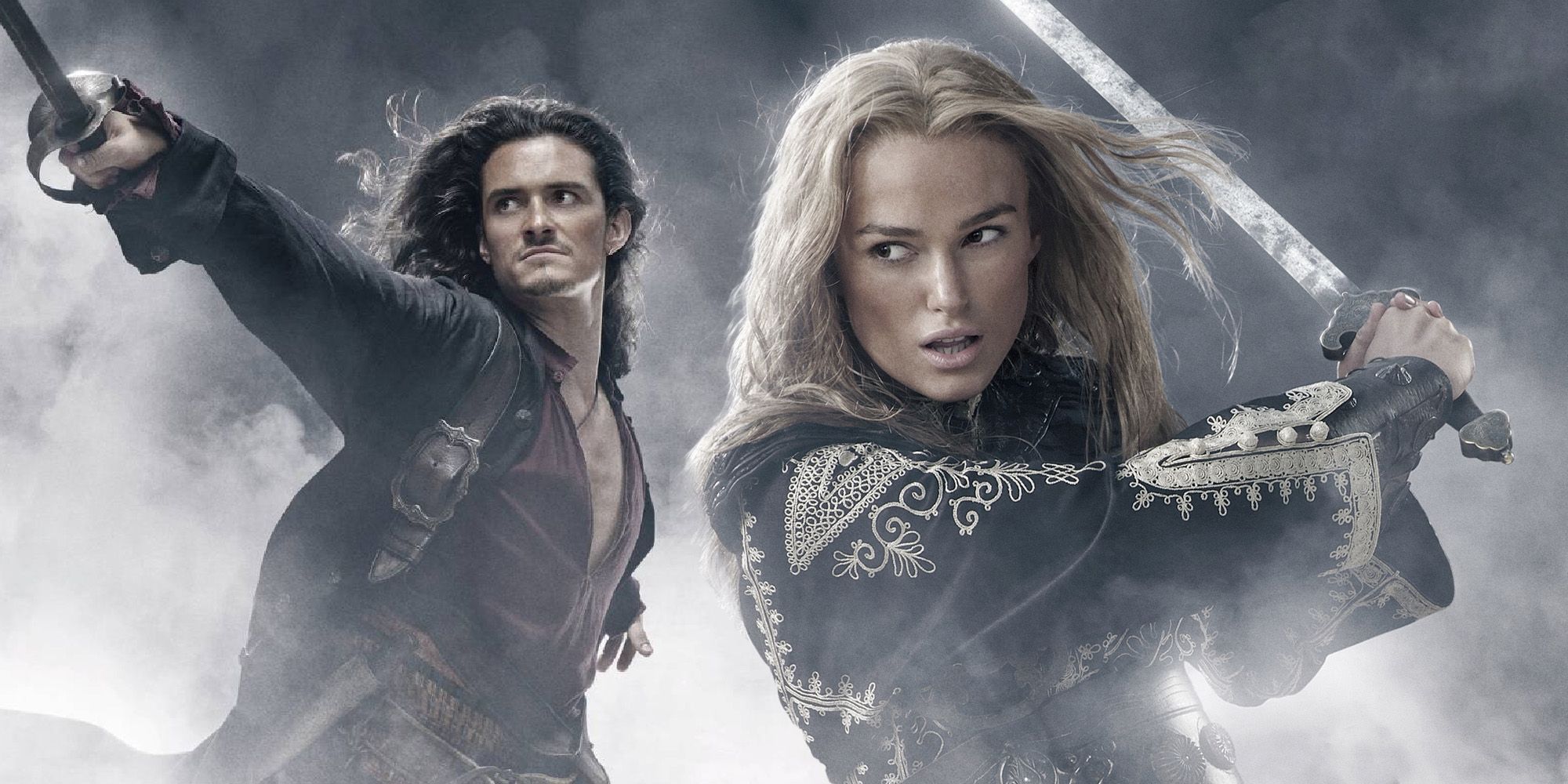 Elizabeth Swann and Will Turner were the lead couple in the Pirates of the Caribbean franchise, and here’s how old they were through the film series.

Pirates of the Caribbean: The Curse of the Black Pearl introduced not only Captain Jack Sparrow but also Will Turner and Elizabeth Swann, who became the lead couple of the franchise. So, how old were Will and Elizabeth in each movie they appeared in? Walt Disney Pictures takes inspiration for its movies from wherever it can: from classic fairy tales to popular legends and even theme park attractions, as is the case of the Pirates of the Caribbean film series, based on the theme park attraction of the same name.

The franchise began in 2003 with Pirates of the Caribbean: The Curse of the Black Pearl, which introduced the characters that would lead the rest of the movies, most notably Jack Sparrow (Johnny Depp). The movie also introduced Elizabeth Swann (Keira Knightley), the daughter of Governor Weatherby Swann who is taken captive by Captain Barbossa (Geoffrey Rush), and Will Turner (Orlando Bloom), a blacksmith’s apprentice who was found clinging to a floating piece of a shipwreck by Elizabeth and her father when he was young. Pirates of the Caribbean had its dose of romance through these two characters, who were secretly in love for years and finally married sometime later.

Related: Pirates Of The Caribbean: Why Jack Sparrow Is Cursed By The Black Pearl

The Pirates of the Caribbean franchise saw Will Turner and Elizabeth Swann grow up and build their own family, all while going through a variety of adventures accompanied by Jack Sparrow. The couple appeared in all but one of the movies, and even then, it’s possible to make an educated guess about their ages in this timeframe. Here’s how old they are in each movie they have appeared in.

The Curse of the Black Pearl

At the beginning of The Curse of the Black Pearl, Elizabeth and Governor Weatherby Swann were en route to Port Royal when they found Will adrift at sea, as he was the only survivor of a pirate attack. Elizabeth and her father rescued him, and she took a gold medallion Will was wearing so he wouldn’t be marked as a pirate. At that point, Elizabeth was 11 years old, as was Will, and with the movie then jumping eight years into the future to continue the story, both Will Turner and Elizabeth Swann were 19 years old for the rest of the movie. By the time The Curse of the Black Pearl was released, Knightley was 18 years old, while Bloom was 26.

Next, Will Turner and Elizabeth Swann returned in the second installment of the franchise, Pirates of the Caribbean: Dead Man’s Chest. As it’s set a year after the events of The Curse of the Black Pearl, Elizabeth and Will were 20 years old in this second movie, which opens with their wedding having to be postponed as they received arrest warrants for allowing Jack Sparrow to escape.

The arc built through The Curse of the Black Pearl and Dead Man’s Chest continued in Pirates of the Caribbean: At World’s End, where Elizabeth and Will were around 21-22 years old. This movie also saw the unusual wedding of Will Turner and Elizabeth Swann, and a post-credits scene showed Elizabeth and their son, Henry, standing atop a cliff searching the horizon for the Flying Dutchman ship. This scene is set ten years later, so Elizabeth (and Will too, though by then he was already the immortal captain of the Dutchman) was 31-32 years old.

Related: Pirates of the Caribbean: What Happened To Elizabeth After At World’s End

Pirates of the Caribbean: On Stranger Tides is the only film in the franchise in which Will Turner and Elizabeth Swann don’t appear at all, as it follows the adventures of Jack Sparrow and Barbossa instead. That doesn’t, however, rule them out from a sensible guess at their current ages in the Pirates chronology. Based on when the events of On Stranger Tides take place within the rest of the franchise’s timeline, it’s possible to estimate Will and Elizabeth’s ages during this time at around 42-43.

After Will and Elizabeth didn’t return for Pirates of the Caribbean 4, they had cameos in Pirates of the Caribbean: Dead Men Tell No Tales. This film followed their son, Henry Turner, as he teamed up with Jack Sparrow to break Will free from the curse of the Flying Dutchman. Henry was 21 by then, so Elizabeth and Will were 42-43 years old in their final (and brief) appearance in Dead Men Tell No Tales. In a fun turn of events, by the time the movie was released, Orlando Bloom was now closer to his Pirates of the Caribbean character’s age as he was 40 years old, while Keira Knightley was 32 years old. The actors, however, only appeared in the fifth Pirates movie to fulfill a contractual obligation, so their performance was fleeting and Knightley’s Elizabeth didn’t have any dialogue at all.

Next: Why No Pirates of the Caribbean Sequel Recaptured The Original’s Success

Adrienne Tyler is a features writer for Screen Rant. She is an Audiovisual Communication graduate who wanted to be a filmmaker, but life had other plans (and it turned out great). Prior to Screen Rant, she wrote for Pop Wrapped, 4 Your Excitement (4YE), and D20Crit, where she was also a regular guest at Netfreaks podcast. She was also a contributor for FanSided’s BamSmackPow and 1428 Elm. Adrienne is very into films and she enjoys a bit of everything: from superhero films to heartbreaking dramas, to low-budget horror films. Every time she manages to commit to a TV show without getting bored, an angel gets its wings.

When she’s not writing, you can find her trying to learn a new language, watching hockey (go Avs!), or wondering what life would have been like had Pushing Daisies, Firefly, and Limitless not been cancelled. Breakfast food is life and coffee is what makes the world go round.

Guillermo del Toro said “hi” to her once. It was great.

What Happened to Everyone at the Star Lasso Experience?