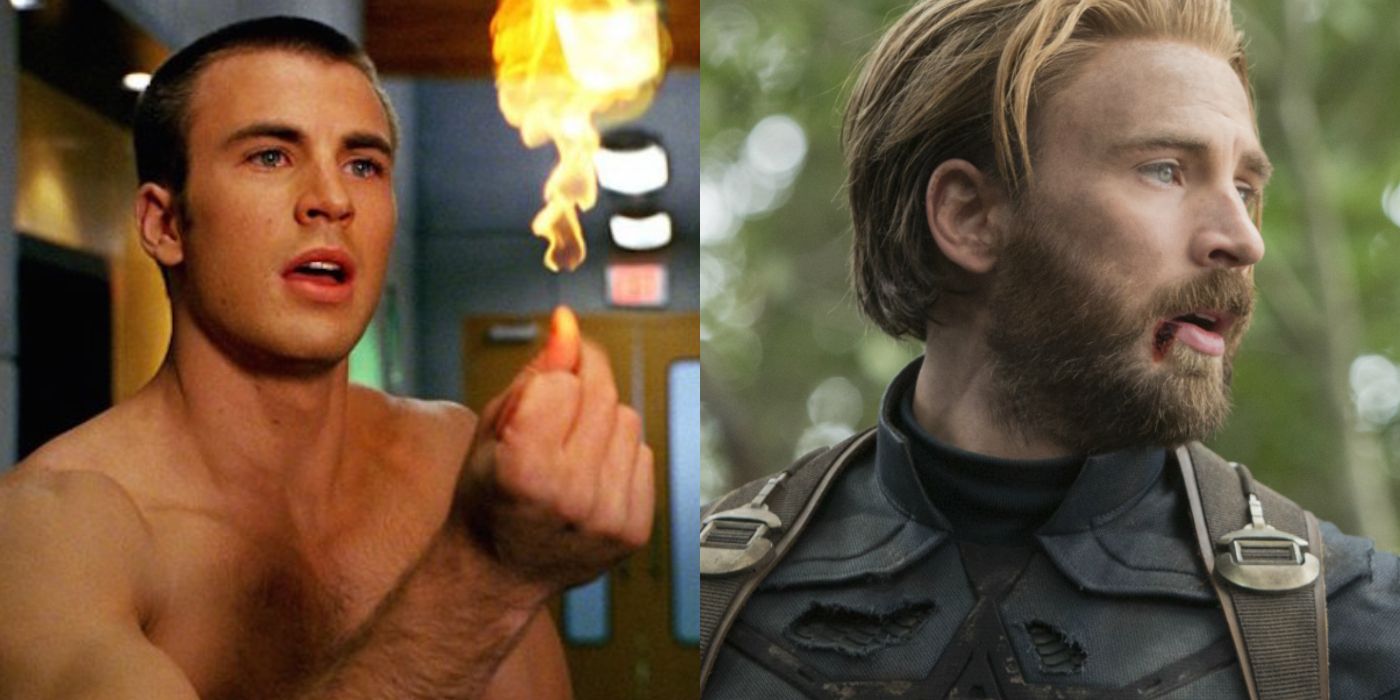 Over the past few years, Chris Evans has become one of the most popular actors in Hollywood. While his charming real-life persona has inspired countless memes, he is also recognized as being a tremendously likable actor as well as an icon thanks to his role as Captain America in the MCU.

With Evans’ days in the MCU apparently behind him, it’s exciting to think about what exciting projects he’ll tackle next. Of course, his accomplished career thus far offers some truly terrific movies to enjoy while we wait. But there are those less-than-stellar projects. Have a look at the good and the bad in Chris Evans’s career, according to the folks at IMDb.

Updated on July 28th, 2022 by Colin McCormick: Chris Evans adds another high-profile project to his impressive career with the Netflix action blockbuster The Gray Man. The movie didn’t impress audiences quite as much as some of Evans’ most popular movies nor does it reach the lowest rated of his projects. With such a popular career for the actor, there are plenty of more interesting movies from Evans that fans loved as well as the ones that didn’t work for them.

Evans made his feature film debut in this very forgettable family drama. The Newcomers follows a family who decides to leave the stress of the big city behind and relocate to a small town. However, they soon find that it is not so easy to fit in. Evans plays the love interest of a young Kate Bosworth.

RELATED: 10 DC Characters Chris Evans Could Play In The DCEU

The movie feels more like an overlong episode of a cheesy television show. The meandering plot feels unfocused and it seems that it is just trying to copy better movies that have told similar stories.

Buzz Lightyear became the first Toy Story character to get a spinoff movie with Evans voicing a new version of the space ranger. This space adventure imagines the sci-fi movie that would have inspired the beloved toy as Buzz visits strange planets and faces formidable threats.

While Lightyear certainly did not get the same love as some of Pixar’s other classic movies, the especially low rating is suspect. Given some of the political conversations surrounding the movie, it is most likely it ranks so low due to an angry online presence rather than the movie’s actual quality.

As fans speculate which actors should play the MCU’s Human Torch, Evans originated the live-action role long before his days as Captain America. Sadly, the Fantastic Four films were much less popular than what the MCU would later deliver.

In this sequel, the franchise continued to embrace its silly, family-friendly tone while trying to bring some beloved characters from the comics to the big screen. The result was a cheesy, ridiculous, and bland superhero movie that mercifully ended this version of Marvel’s first family.

Evans and Scarlett Johansson seem to be the kind of actors who love working together and their first of many collaborations was the teen heist film The Perfect Score. The movie centers around a group of high schoolers who decide to steal the answers to the SAT test in order to ensure their future.

Though the premise could have been a fun teen comedy with a darker edge, the filmmakers played it very safe and fairly dull. Even the talented cast wasn’t able to do much with these stereotypical characters and lazy jokes.

Evans doesn’t often get to show off his comedic side, but he really let loose with one of his first leading roles. Not Another Teen Movie is a spoof of the popular teen movies of the ’90s, such as 10 Things I Hate About You and She’s All That.

Evans plays the popular quarterback who accepts a bet to turn a nerdy girl into the prom queen. Though Evans is funny in the role, the endless jokes might have been too hit-or-miss for most audiences.

The first Fantastic Four was enough of a hit at the box office to earn a sequel, but its reputation made it clear this franchise was in trouble from the start. It tells the origin story of how four people gain incredible superpowers and become heroes.

Evans was one of the few bright spots as Johnny Storm, playing the quippy, arrogant hero role quite well. But some other cases of miscasting, a predictable story, and some really cringy comedy made this movie a real misfire.

Decades after his death, a lost screenplay by celebrated writer Tennessee Williams was found and brought to the big screen. Bryce Dallas Howard stars as a socialite in 1923 who falls for a poor working man (Evans) only for a missing diamond earring to threaten the romance.

Unfortunately, the story behind Loss of the Teardrop Diamond was seen as more interesting than the movie itself. It was seen as a dull movie with an old-fashioned tone that felt awkwardly out of place.

Evans is best known for his action-packed and blockbuster movies, but the much quieter movie Gifted charmed plenty of fans. Evans plays a man raising his young but extremely intelligent niece following the death of his sister. While he tries his best to nurture her gifts, he risks losing her.

The movie is a heartwarming story with a winning performance from Evans in a much more grounded role than fans are likely used to seeing from him.

After establishing Captain America’s origin story in World War II, Captain America: The Winter Solider had to find a way to make the character work in a modern setting. It cleverly looked at the juxtaposition of Cap’s good-vs-evil mentality and the more grey reality of the 21st century.

The result is an action-packed political thriller that pushes the character forward in some exciting ways. It also brings back Bucky Barnes and explores him as one of the most tragic characters in the MCU.

The final chapter of the Captain America franchise proved to be the most popular among fans. The sequel plays on the rivalry of Captain America and Iron Man on opposite sides of a battle, leading to an epic superhero showdown that threatens to destroy the Avengers.

With a stacked cast of heroes, this almost feels like an Avengers film, though Evans gets plenty of time to shine as the lead. It features some thrilling action scenes, exciting new characters, hilarious comedy, and a surprising emotional impact.

Rian Johnson delivered one of the most enjoyable films of 2019 with the murder mystery Knives Out. Daniel Craig stars as a renowned detective investigating the family and friends of a wealthy mystery author who has died under unusual circumstances.

Craig is hilarious and eccentric as the lead while the all-star ensemble brings so much verve to their characters. Evans is particularly fun playing against type as the spoiled and self-centered Ransom. Knives Out is a brilliantly constructed mystery comedy that will have you on the edge of your seat.

Phase 1 of the MCU came to a close with an epic team-up that proved this cinematic universe was a success. When Loki, the God of Mischief, comes to Earth with a powerful weapon, the mightiest heroes must come together and save the day.

The ambition of the project paid off as fans got to see these iconic characters share the screen in a hugely entertaining adventure. The cast worked so well together and there was a lot of fun with the heroes clashing before assembling as a team for the thrilling finale.

Finally, Thanos was front and center as the MCU’s most formidable villain in Avengers: Infinity War. As the Mad Titan methodically carried through with collecting Infinity Stones, the heroes desperately try to stop him from carrying out his terrible plan.

Though Cap’s appearance is shorter than might be expected, Evans still makes for an impressive hero while joining plenty of the other MCU characters. Infinity War is a fast-paced and fun ride through the universe, building up to a shocking end.

The culmination of the MCU thus far came to an epic finale in Avengers: Endgame, a finale that didn’t disappoint. In the aftermath of Infinity War, the remaining Avengers attempt to find a way to make things right.

This massive finale managed to pull off a satisfying ending that closed a big chapter for the MCU while setting up the future. Evans really shines in what could be his final appearance as Captain America and proves why the character has become such a cinematic icon in his hands.

Colin McCormick is a Senior Writer with Screen Rant and has been a proud member of the team since 2019. In addition to his work as Screen Rant, Colin is also a writer of News, Feature and Review pieces at Game Rant. Colin has had a long passion and obsession with movies going back to the first time he saw The Lion King in theaters. Along with movies, Colin stays up-to-date on the latest must-see TV shows. While he loves to find interesting projects in any kind of genre, he has a special movie of crime stories that are infused with a little dark humor much like the work of his favorite author, Elmore Leonard.