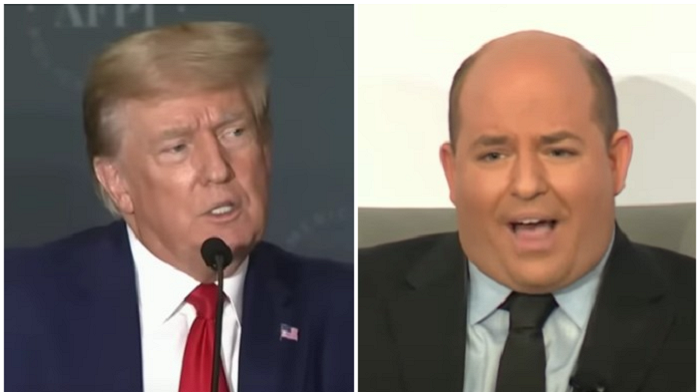 Former President Donald Trump sent CNN a 282-page letter threatening to file a lawsuit against the network over what he contends are “repeated defamatory statements.”

The bulk of the allegations revolves around the network’s alleged lies about “overwhelming evidence” of election fraud in 2020.

“I have notified CNN of my intent to file a lawsuit over their repeated defamatory statements against me,” a statement accompanying the letter from the former President reads.

“I will also be commencing actions against other media outlets who have defamed me and defrauded the public regarding the overwhelming evidence of fraud throughout the 2020 Election,” he added.

BREAKING: Trump files defamation lawsuit against CNN, vows to sue others ‘who have defrauded the public’ regarding the 2020 electionhttps://t.co/PQyc8h23i8

CNN has repeatedly referred to Trump’s claims of fraud as “lies,” “false narratives” and “baseless theories,” to name a few.

The lawsuit alleges those descriptions are “false and defamatory,” and faults CNN for not taking into account Trump’s “genuine belief in his statements.”

The Hill reports that numerous lawsuits regarding unproven election fraud in 2020 have been dismissed by judges due to lack of evidence, “in some cases by judges appointed by Trump.”

President Donald Trump joined me in a one-on-one interview EXCLUSIVELY on #TheSaraCarterShow podcast. He responded to the DOJ investigation targeting him, the radical left’s continued attacks and his lawsuit against CNN and so much more… DOWNLOAD: https://t.co/40b8DTKCcv pic.twitter.com/hRJkAA1yTs

The letter from Trump demands CNN issue a retraction as a means to avoid the lawsuit.

“Failure to publish such a correction, apology, or retraction will result in the filing of a lawsuit and damages being sought against you, CNN,” the letter warns.

RELATED: Media Frets That Republicans May Shut Out, Ignore Them Going Forward

CNN isn’t going to issue a retraction on stories suggesting claims of election fraud are ‘lies.’

And there is little likelihood that a lawsuit filed by Trump against the network based on his ‘genuine belief’ is going to work. So, it’s a mystery as to what the former President is trying to accomplish here. Or maybe it isn’t.

“I will never stop fighting for the truth and for the future of our Country!” his letter reads.

In March, Trump filed a massive lawsuit against Hillary Clinton and numerous high-profile public figures over an “unthinkable plot” to create a Russia collusion narrative during the 2016 presidential campaign.

BREAKING: Trump sues Hillary Clinton, the DNC, Marc Elias, Fusion GPS, and others for conspiring to “cripple” his bid for presidency and accusations of collusion with “hostile foreign country”

To be sure, CNN does have an extensive history of promoting false narratives.

College student Christopher Phillips laid out that reality when he confronted CNN host Brian Stelter at a forum on ‘disinformation’ back in April.

“You’ve all spoken extensively about Fox News being a purveyor of disinformation, but CNN is right up there with them,” Phillips said.

“They push the Russian collusion hoax, they push the Jussie Smollett hoax, they smeared Justice Kavanaugh as a rapist, and they also smeared Nick Sandmann as a white supremacist. And yes, they dismissed the Hunter Biden laptop affair as pure Russian disinformation,” he added.

Brian Stelter just got called tf out by a college freshman for every major hoax CNN has pushed.

His response was “that’s a popular right-wing narrative.”
pic.twitter.com/bOvE9wDiAD

Stelter, of course, actually told viewers the emails from Hunter Biden’s laptop were possibly “made up.”

“For all we know, these emails were made up, or maybe some are real and some are fakes, we don’t know,” Stelter said. “But we do know that this is a classic example of the right-wing media machine.”

“This is a classic example of the right-wing media machine,” @brianstelter says. “Fox and Trump have this in common: They want you to stay mad and stay tuned.” pic.twitter.com/HNoaTF6IQt

CNN on Wednesday, nearly 21 months since the presidential election, finally decided to have a “cyber forensics expert” dive into those emails and confirm their authenticity.

To summarize – They weren’t ‘made up.’

CNN cryptographically authenticates emails from Hunter Biden’s laptop 651 days after it was first reported by @nypost.

Perhaps a Trump lawsuit against CNN over their Hunter Biden coverage would stand a better chance?

In 2017, three journalists at the network were forced to resign after CNN published and ultimately retracted a story linking a Trump transition team member to the Russia-related investigations.