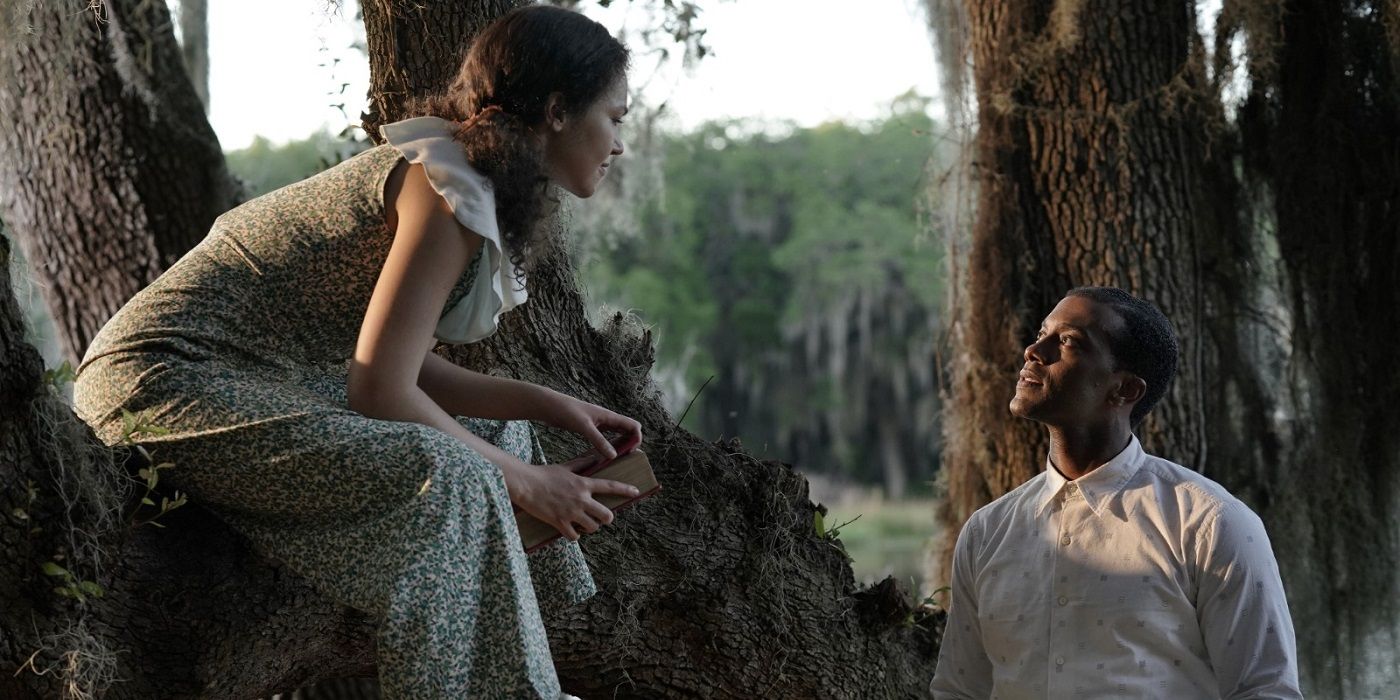 In what Netflix is saying was a project that Tyler Perry has been “waiting to tell for 27 years,” we’re finally getting a first look at the multi hyphenated creative’s upcoming drama, A Jazzman’s Blues. Written, directed, and produced by Perry, the feature will center on “a tale of forbidden love.” While not much else is known about the plot, it will be packed with scandals, secrets, and an unsolved murder. Set to star in the feature is a lineup that includes the likes of Joshua Boone, Solea Pfeiffer, Brent Antonello, Brad Benedict, Ryan Eggold, Milauna Jemai Jackson, Kario Marcel, Austin Scott, and Rob Wood.

The image, which Netflix released to its Twitter account today, reveals a period piece production set amidst trees and open fields. In it, we see Pfeiffer and Boone, who are presumably our star crossed lovers. Pfeiffer’s character dons a patterned dress with a wide neck piece and sits on a tree limb, hanging her feet from it. It appears that Boone’s character has come to speak with her while she’s been lost in a story as she holds a book in her hands. Interrupted or not, she doesn’t seem to be bothered by the visit as she leans in, engaged in whatever it is that Boone’s saying. Wearing a white, long sleeve button down shirt with peach-colored slacks, Boone gazes up at Pfeiffer with excitement in his eyes. The connection between the two is made more apparent the longer you look at the photo with the on-screen chemistry oozing out of the frame.

The drama marks the second Perry-helmed feature to drop in 2022. In late February, the performer put out A Madea Homecoming, the twelfth installment of his Madea-centered universe. Prior to A Madea Homecoming, the last time we saw the larger-than-life antics of the grandmother was in 2019’s A Madea Family Funeral. In the meantime, Perry has kept busy with a slew of acting projects with titles including Don’t Look Up, PAW Patrol: The Movie, and Those Who Wish Me Dead. In 2020, he released the Netflix thriller, A Fall from Grace, of which he also starred and produced.

RELATED: Tyler Perry on ‘A Madea Homecoming,’ Whether She’ll Stay in Retirement, and Getting to Make ‘A Jazzman’s Blues’

From the photo and accompanying caption, we can expect A Jazzman’s Blues to show us a side of Perry that we’ve never seen before – that of a romantic drama director. Given the details we know about the story and the chemistry between its leading actors, we’re guessing it’s going to be a real tear-jerker.

A Jazzman’s Blues will be released by Netflix on September 23, 2022. You can see the image below.

Perry discusses directing A Jazzman’s Blues in the interview below: