Govt tried everything to defeat us in Punjab by-polls: Imran Khan 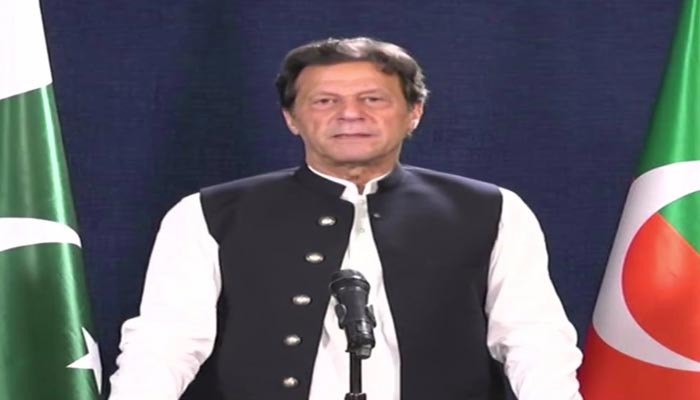 PTI Chairman Imran Khan on Wednesday said that the government tried everything to defeat the PTI in the Punjab by-elections.

During a televised address to the public, Khan claimed that PML-N leader Hamza Shehbaz and the Election Commission of Pakistan (ECP) worked in connivance to defeat his party in the by-polls.

“First of all, Hamza was illegally imposed on us,” he alleged, adding that despite being refrained by the SC from using state machinery and administration for personal gains, the PML-N leader used it to rig elections in the province.

He accused the ECP of collaborating with Hamza and termed his party’s victory a “miracle”.

“A new history is being written,” he said, claiming the win came after the public stepped out to cast votes for the PTI.

The former premier added that the coalition government “disrespected the public”, considering them “sheep and goats” and tried imposing “corrupt people” on them.

Recalling the announcement of the “Azadi March” by the PTI on May 25, Khan said that the coalition government created obstacles for those stepping out to support the “Haqeeqi Azaadi”.

“Today, I want to thank the Almighty that despite all the impediments, people came out to show support rather than staying at home out of fear,” he said, adding that he was happy to see Pakistanis now turning into a nation.

He added, “throughout my life, I have witnessed such enthusiasm only once before and that was during the 1965 war; at that time, everybody thought that the nation was fighting. And now, I saw the same enthusiasm among the masses during the by-polls in the 20 constituencies of Punjab.”

In his address, he also thanked the public for showing their support and taking to the streets in celebration last night following the Supreme Court’s verdict in favour of the PTI.

The SC declared Pervez Elahi as the new chief minister of Punjab after removing PML-N’s Hamza Shahbaz from office.

Why the Inflation Reduction Act will not reduce inflation: Former Trump economist