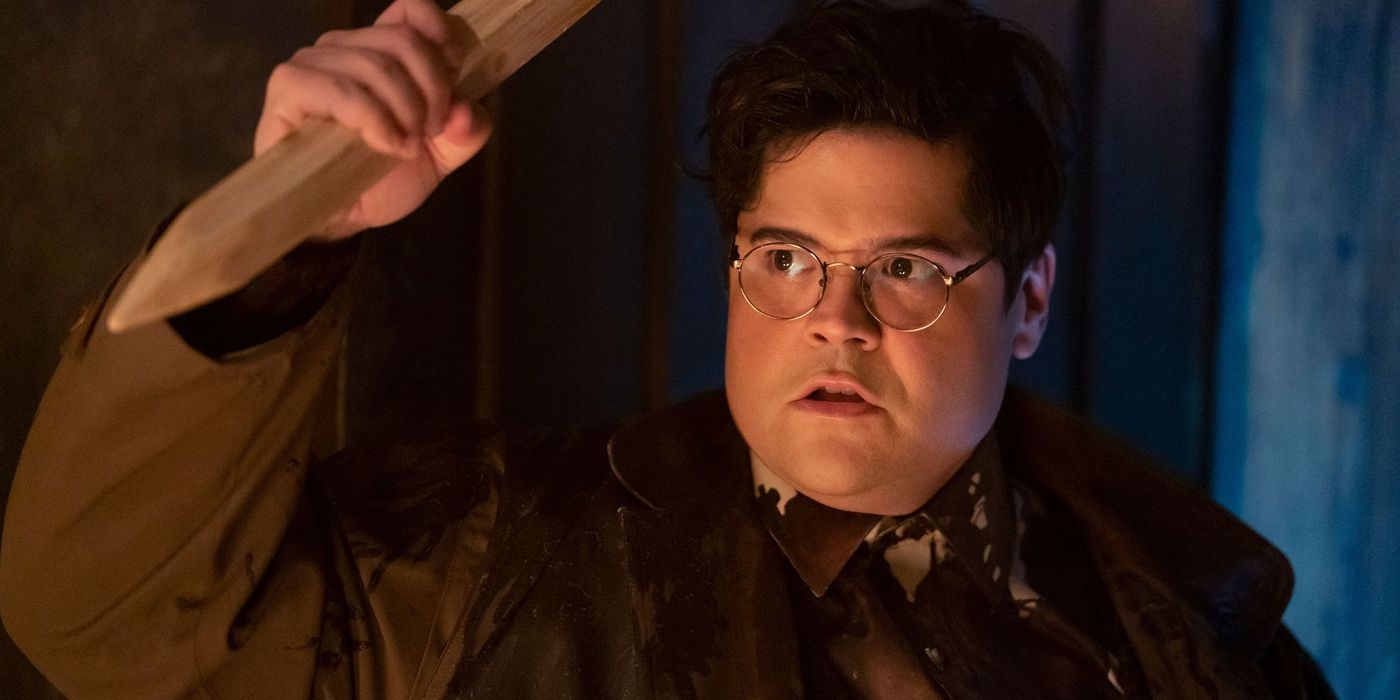 Two weeks after the Season 4 premiere of What We Do in the Shadows, the cast swept into San Diego Comic-Con and joined Collider’s Perri Nemiroff for an interview to talk about all things vampires, the ambitious Night Market scene, the eerie baby Colin Robinson, and of course Guillermo’s (Harvey Guillén) near-constant wish of being turned into a vampire by Nandor (Kayvan Novak).

Since the series first premiered, Guillermo has consistently been hoping that Nandor would show his familiar a little mercy and turn him into a vampire. After the revelation that Guillermo is a descendant of Van Helsing, the likelihood of him being turned started to wane even further, though Guillermo remains ever hopeful that one day his master might decide to turn him. Season 4 introduces a new challenge to his hopes and dreams, as Nandor dedicates his focus to finding a wife for himself—something that runs into a bit of a hiccup after a clever djinn fulfilled one of Nandor’s wishes with a bit of a Guillermo-sized twist. Nemiroff asked Guillén if there was a chance that the familiar might one day reach a point where he stopped wanting to be a vampire and the actor explained answered, saying:

No, I don’t think he has gotten to that point. Every time he gets discouraged by seeing how the familiars like, I’m thinking of Benji, and how he never became a vampire, and he was hypnotized to forget everything. Seeing how things are not working out the way he planned, he’s taking matters into his own hands. So sometimes you can get what you want, it’s just a different route. So maybe that’s going to be the case, or maybe he gives up on it. But I feel like he’s never going to want to not, not want to be a vampire. I think he has a great backstory of why he wanted to do that. They’re so fabulous. They get to wear these beautiful clothes, they live forever, they’re young, they feast, they F, and then they do whatever they want. So I think he wants to live a life that’s carefree like that. So he will always want to be that.

RELATED: Why Harvey Guillén’s Guillermo Is The Glue Holding ‘What We Do In The Shadows’ Together

He goes on to explain that Guillermo’s idea of what becoming a vampire will be like has evolved since Season 1. “He’s seen by trial and error what you should do, ‘With great power, comes great responsibility,’ or you can just throw it out the window,” Guillén shared, going on to say “He takes from every one of the vampires. I feel like he likes certain elements of each one of them. He admires him for [the] different qualities each present and maybe at the end makes for the ultimate vampire.”

The series’ executive producer Paul Simms and Guillén also joked about which was better for Guillermo, for him to be happy or to get what he wanted, perhaps hinting that—if he never gets to be turned into a vampire as he wants—perhaps he’ll get something that will ultimately be good for him because it makes him happy. “Well, there’s that’s the question, isn’t it?” Guillén questioned, “What you want makes you happier? Or will it make you happy? That’s the bigger question. So I don’t know if getting what you want makes you happy. But will it make you happy to get what you want? So we’ll have to see.”

There are definitely a lot of What We Do in the Shadows fans that are hoping that what makes Guillén might be Nandor. The two have palpable chemistry and with both of them on their own quests to find love this season, perhaps they’ll realize that the love they’re looking for has been there all along.

FX’s What We Do in the Shadows streams weekly on Hulu. Check out our interview with the cast down below: