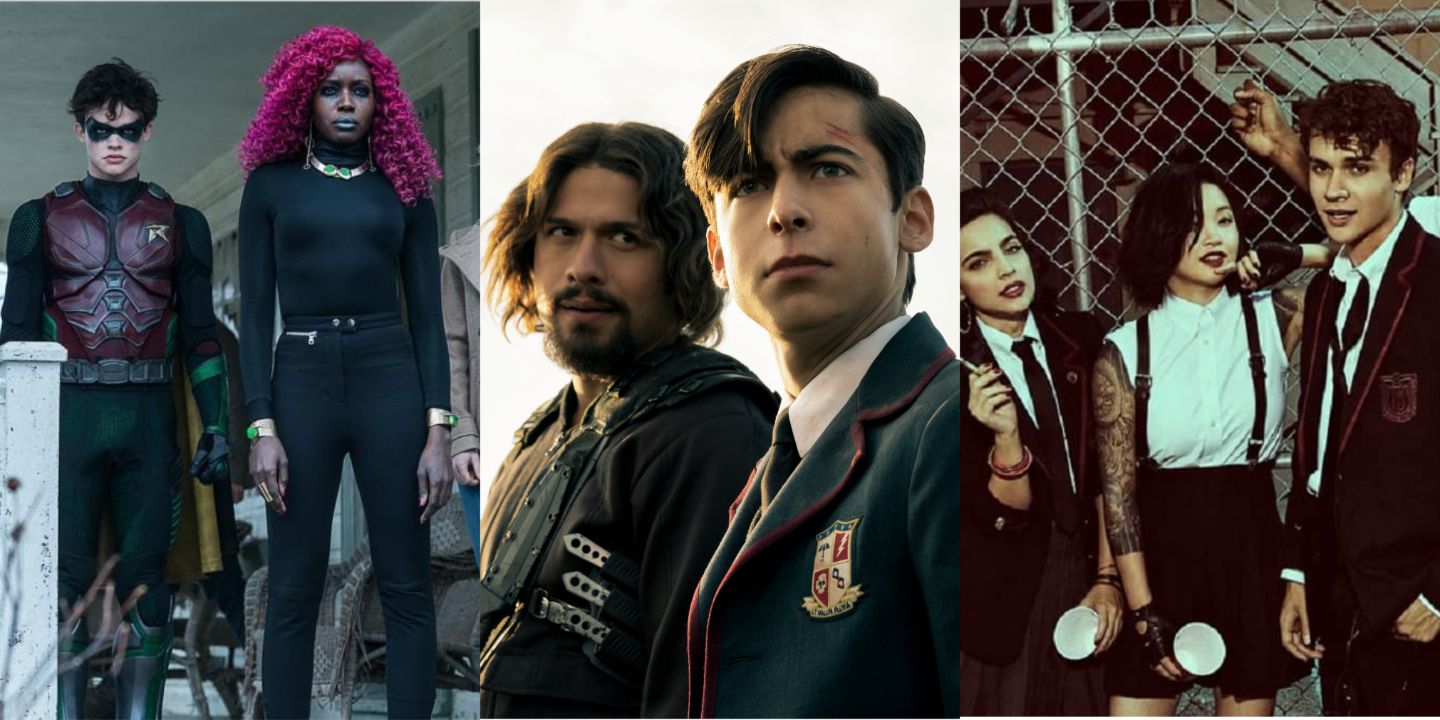 For those who enjoy a good superhero series (and aren’t particularly loyal to the MCU/DCEU), season 1 of The Umbrella Academy just hit Netflix and it’s pretty entertaining. The show is a TV adaptation of a comic book series about a dysfunctional family of superheroes who reunite after the death of a patriarch and under the threat of the apocalypse.

It’s always fun to watch an ensemble cast full of superheroes save the world, but what happens after the first season is over? Lucky for us, there are plenty of similar shows to be streamed both on Netflix and beyond. Here are 10 shows to watch next if you enjoyed The Umbrella Academy.

Updated on July 26th, 2022 by Kevin Pantoja: The Umbrella Academy dropped its highly anticipated season 3 back in late June and it has continued the trend of being one of the best superhero series currently airing. Considering just how many shows based on superpowered beings are out there, it is incredibly difficult to stand out. Thankfully, that vast array of shows in that vein means that fans of The Umbrella Academy have plenty of options to check out for a similar experience.

Thanks to their work in the Marvel Cinematic Universe, The Russo Brothers are basically superhero royalty these days. Their names are attached as executive producers to Deadly Class, a Syfy series based on a comic book of the same name.

The show is set in the ’80s and centers on a private school where students are trained to become assassins. Although superpowers might not play a main part in this tale, the school setting and some of the action are right in line with The Umbrella Academy.

Although Margot Robbie is the main actor associated with Harley Quinn, Kaley Cuoco does spectacular work voicing the antihero in the self-titled animated series. Unlike The Umbrella Academy, this is a DC product featuring iconic characters like Harley, Batman, Joker, and more.

However, fans of the Netflix series will likely appreciate Harley Quinn due to how outlandish it gets. The Umbrella Academy is known for things like the Footloose dance scene in season 3 and Harley Quinn tends to go the extra mile for wild scenes pretty often.

While superhero shows might not be for everyone, even those who don’t like powers can still get into The Umbrella Academy because of the intriguing relationships between the characters. The dysfunctional family at the center drives everything.

For anyone who likes that, Sense8 can give you a similar vibe. The Netflix original created by The Wachowskis focuses on a group of people who discover that they are linked emotionally and mentally, with that connection being the driving force of the series.

It’s almost as if The Umbrella Academy was designed for fans of Misfits because there are so many similarities. Set in London, Misfits follows a group of teens serving community service when they’re hit by lightning and end up with superpowers.

Their differences are clear yet they still form a bond, much like the Hargreeves siblings. Also, the first two seasons feature Robert Sheehan, who plays the beloved Klaus Hargreeves on The Umbrella Academy, giving it another key connection.

Outside of the MCU, the most popular superhero shows are likely The Umbrella Academy and The Boys. This Amazon Prime original show, based on a comic book series of the same name, takes an adult approach to the genre, often pushing the limits more than anyone.

RELATED: The 10 Best Duos In The Boys

Although it can get wild and have comedic moments, The Boys is more serious and cynical than The Umbrella Academy. It hits on political themes that are impressively timely but it’s still something worth binging and is arguably the most consistent show on TV right now.

Like The Umbrella Academy, Titans is a TV show based on a comic book series (Teen Titans) involving a plot that threatens to destroy the entire planet. The series (comprised of eleven episodes) premiered towards the end of 2018 and has stuck around for a while.

Unlike more comedic approaches to the group of heroes, this show takes a more adult and gritty approach. It has stuck around for longer than most people expected after the initial trailer was released and carved out a nice little niche.

Netflix has every season of The Flash ready to binge-watch right now. The show, which is a spin-off from Arrow, is based on the DC Comics character Barry Allen (Flash), a costumed superhero with the power to move at superhuman speeds.

RELATED: 10 Best Storylines In The Flash, According To Reddit

If superpowers and crime fighting were what you liked about The Umbrella Academy, then The Flash has got everything you’re looking for.

Like The Umbrella Academy, Black Lightning is another superhero TV series based on an existing comic book. It stars Cress Williams as DC Comics’ Black Lightning, real name Jefferson Pierce, a high school principal who retired from his superhero persona nine years ago to focus on his family.

Fortunately for everyone in his community, Pierce is forced back into the superhero life with the rise of a local gang. Like the characters in The Umbrella Academy, Black Lightning is relatable, funny and unexpectedly superhuman.

The CW’s Supergirl is yet another superhero action-adventure series based on the titular DC Comics character (Melissa Benoist). This superheroine is Superman’s cousin and one of the last surviving Kryptonians.

Like the characters in The Umbrella Academy, 24-year-old Kara (Supergirl) has to learn to embrace her powers by becoming one of Earth’s protectors. Obviously, there’s an alien element that’s unique to the Supergirl/Superman storyline, but in both shows, superpowers are used for the good of humanity.

There have already been a bunch of DC comics-inspired TV shows on this list, but Marvel got in on the action too. Marvel’s Agents of S.H.I.E.L.D. is a TV series based on  S.H.I.E.L.D. (Strategic Homeland Intervention, Enforcement, and Logistics Division), a fictional peacekeeping and spy agency set in the MCU, even if it doesn’t have a ton of connections.

If a group of superheroes is what does it for you, then head over to Disney+ and watch the entire series, which is criminally underrated by those who chose to ignore it.

The Gifted is a science fiction superhero TV series based on Marvel Comics’ X-Men properties that is set in an alternate timeline where the X-Men have disappeared. The storyline is similar to that of The Umbrella Academy in that it involves siblings with superhuman or “mutant” abilities.

Unlike the adult adoptees in The Umbrella Academy, however, the children in The Gifted are hidden away by their parents in an underground community where they (and others like them) have to fight to survive.

Arrow is a superhero TV series based on the DC Comics character Green Arrow, and like The Umbrella Academy, it’s currently available to stream on Netflix.

Arrow follows billionaire playboy Oliver Queen (Green Arrow), who returns home to fight crime after being stranded for five years on a deserted island (think Diego with a bow and arrow instead of knives). For viewers who enjoy a bit of vigilante justice and quirky, witty dialogue, Arrow is the perfect choice.

Legion is a TV series created for FX that’s based on the Marvel Comics character David Haller (Legion). The show stars Dan Stevens a mutant diagnosed with schizophrenia at a young age leading to his powers being unpredictable.

RELATED: 10 Best Episodes Of Marvel’s Legion, Ranked According to IMDb

Like the characters in The Umbrella Academy, Legion isn’t alone in the world and soon discovers that there’s much more to him than his mental condition. For those who feel like watching a group of mutants fight their villainous counterparts, you can stream the entire series on Hulu.

Marvel’s Inhumans is a TV series based on the Marvel Comics race of the same name, and as you can probably tell by the name, there’s nothing typical about this “family.”

The series is centered on Black Bolt (Anson Mount) and other members of the Inhuman Royal Family who are forced to escape to Hawaii after a military coup. Although reviews for this were pretty poor, it might be worth checking out again after Black Bolt appeared in Doctor Strange in the Multiverse of Madness.

The CW’s DC’s Legends of Tomorrow is a superhero series based on the characters of DC Comics and features characters introduced in both Arrow and The Flash. If time travel is what you enjoyed about The Umbrella Academy, then you’re really going to like this one.

Following the murder of his family, Time Master Rip Hunter assembles a team of heroes to travel through time and defeat Vandal Savage in the year 2166. Will they survive and save the world from a powerful evil? Watch on Netflix and find out.

NEXT: The 10 Best Netflix Original Shows Based On Comics