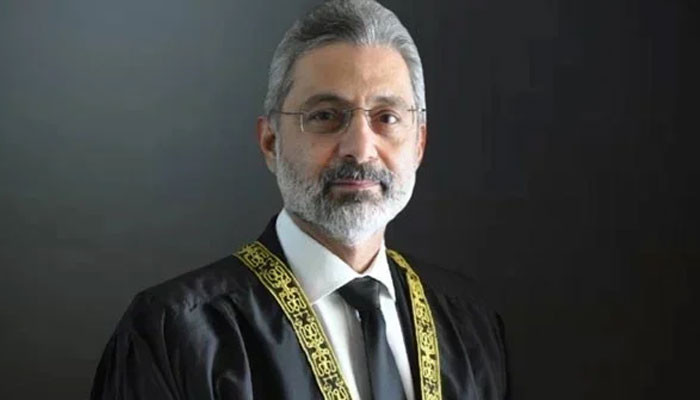 In a letter written to the JCP, Justice Isa sought the postponement of its meeting scheduled to be held on July 28, 2022, saying that the matter to be reviewed  “requires utmost care and due deliberation as it is extremely delicate”.

The justice has severely criticised CJP Bandial for scheduling the meeting at such a time when he (Isa) was not able to physically attend the meeting as was currently on leave abroad.

He stated in the letter that while on annual leaves, he received a WhatsApp message from the Additional Registrar of the Supreme Court that the CJ has called a meeting of the JCP on July 28 to consider appointing five judges to the SC.

“No meeting of the JCP was scheduled before I applied for the annual leaves but as soon as I left Pakistan, the chief justice decided to hold two meetings of the JCP to consider appointments to the Sindh and Lahore High Courts, and now a third unscheduled meeting of the JCP is to be held during the summer vacations of the SC,” Isa wrote.

He said that the summer vacations of the SC were notified by the CJ himself and later published in the Official Gazette. He said that “if the CJ renders his own notification utterly meaningless then let him first withdraw it, instead of violating it”.

Moreover, he mentioned that he was referred to 2,347 pages of documents regarding the appointment of judges through WhatsApp.

“The CJ wants to rush through a most delicate matter in a very questionable manner. He wants 2,347 pages of documents to be examined in a week.”

He complained that he was unable to view all the pages as he could access and read only 14 out of 2,347 pages.

“[…] the documents have still not been couriered to me or sent to the Pakistan Embassy at Madrid for onward transmission to me,” he said.

Addressing the chief justice, he said: “CJ, please do not ridicule the JCP and your nominees by contravening the Constitution. The JCP deserves to be treated with respect and consideration by its chairman.”

“Therefore, I request that the JCP meeting should be postponed. Instead, let us first meet to consider how to proceed further in the matter. And, if Chief Justice and senior puisne judges of the high courts are to be bypassed then to first develop for consideration of the JCP criteria for nominees, since the then senior most judge failed to accomplish the task assigned to him,” Justice Isa wrote.

He also demanded an end to the practice of giving the JCP pre-selected names to consider for the judges’ appointments.

“Restricting the JCP to consider only the CJ’s pre-selected nominees is inappropriate. The JCP deserves to be treated with respect and consideration by its Chairman,” Justice Isa said.

‘More care exercised in appointment of cook than judges’

Justice Isa had raised objections to the calling of two Judicial Commission of Pakistan (JCP) meetings for the appointment of new judges in his absence earlier as well.

Justice Isa said he learnt, through the media, that two meetings of the JCP have been called on June 28 and 29, respectively, to consider the nominees.

Bridge atop stream swept away near Karakoram Highway due to flood