HomeVideo10 Changes In Peter Jackson's 'The Hobbit' Trilogy From The Lord of...
Video 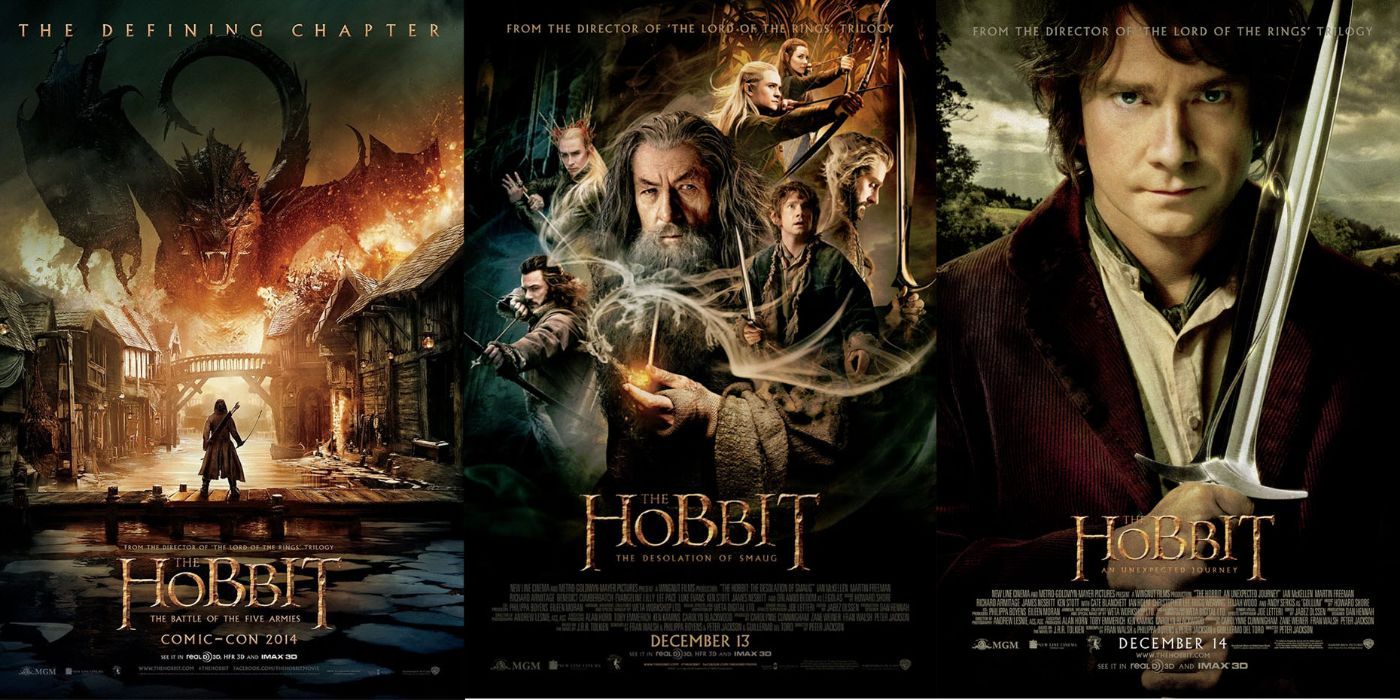 While grading examination papers at Oxford, J. R.R. Tolkien found a blank page and wrote, “In a hole in the ground there lived a Hobbit.” Soon he was writing a story for his children that became The Hobbit. It has since never been out of print and inspires new generations of readers with its memorable characters, clever story, and strong themes of the dangers of greed over the comforts of home.

Related: 10 Reasons To Watch ‘The Last Unicorn’ With Your Kids

Though several adaptations of The Hobbit have been made, the trilogy helmed by The Lord of the Rings director Peter Jackson is the most prominent. However, this trilogy inevitably had to change and add material thanks to a troubled production and splitting a small book into three long movies. While the changes made to The Lord of the Rings’ were largely accepted, The Hobbit’s bloats the story rather than helps.

Thorin Oakenshield, the leader of the company, has suffered many hardships before he met Bilbo Baggins. His home was taken by a dragon, his family sundered, and his people made destitute. As such, he is more melancholy than other dwarves, rarely participating in songs and often brooding alone in his thoughts.

None of this matches Thorin’s personality in the book, where he is a jubilant fellow who loved the sound of his own voice. It was Thorin who suggests playing music before discussing their plans with Bilbo, unlike the film where Thorin halts the merrymaking. He is still noble and skilled with a sword, but there is more levity to be had with this important dwarf suffering all manner of indignation.

Chasing after the company is the orc, Azog the Defiler. Decades ago, he killed Thorin’s grandfather, Thror, for which Thorin chopped his hand off and left him for dead. Now he is back to see the line of Durin extinguished by slaying Thorin and his nephews and leading the forces of Sauron to conquer the north.

Azog is an example of material taken from the Appendices of Return of the King. In Tolkien’s history, Azog was beheaded in the battle against the dwarves by Dain Ironfoot, Thorin’s cousin. If they wanted a recurring orc villain, they should have used Azog’s son, Bolg, who the movies reduce to Azog’s lackey and withhold introduction until movie two.

The Necromancer Wasn’t A Big Deal

Although Gandalf accompanies the party from Hobbiton, in both book and film he leaves them outside Mirkwood. He later recounts that he and other members of the White Council joined to kick a sorcerer called the Necromancer from the ruins of Dul Guldur. As it turned out, the Necromancer was Sauron.

Related: How to Watch Lord of The Rings and Hobbit Movies In Order

The key difference is that in the book, Sauron barely put up a fight, as he was ready to return to Mordor after gathering power. The movies decided to make Sauron the puppet master behind all events, from ordering Azog to kill the dwarves to attacking the armies of good with massive hoards of orcs in The Battle of the Five Armies. It feels like the filmmakers wanted to use Sauron to recapture the size and scale of The Lord of the Rings when they should have told the smaller story of The Hobbit.

Legolas Was Not There

Orlando Bloom returns as Legolas, the son of King Thranduil, who would one day join the fellowship in its quest to destroy the One Ring. Here, he aids his father in defending Mirkwood from giant spiders and later chases after orcs commanded by Bolg. In movie three, he stood alongside the heroes against Sauron’s armies and managed to kill Bolg in a duel.

Related: Top Elven Characters in Lord of The Rings

Absolutely none of this happened in the book because Legolas had not been invented yet. Still, the issue is not that Legolas is in the movies: it makes sense since his father is a prominent character, and many fans hoped Bloom would make a cameo. The issue is that, once he appears, the film makes him the next most important character under Thorin and company, which further takes the focus away from Bilbo, the real main character.

Alongside Legolas is Tauriel, a lowly Sylvan Elf who serves as captain of Thranduil’s guard. She takes a fancy to Thorin’s nephew, Killi, and leaves home to heal him when she learns he is dying after an orc attack. Unfortunately, she is unable to save Killi during The Battle of The Five Armies and is forced to watch him die.

Related: ‘The Hobbit’ Cast Character GuideIgnoring the fact that Tauriel didn’t exist in the book, nothing about her makes sense. Lore-wise, she is too young to be captain of the guard when Thranduil has plenty of more experienced soldiers, and her healing skills seem better than Elrond’s, one of the oldest elves in Middle Earth. Her love story with Killi and Legolas is also overdone and was something actress Evangeline Lilly tried to fight against.

Before arriving at the lonely mountain, the dwarves make a stop in Laketown. It is a gloomy, grimy town ruled by a corrupt Master and his lackey, Alfred Lickspittle. The Master hopes to use the dwarves to incarcerate Bard, a local bargeman who the Master fears as a rabble-rouser.

If all this sounds like it has nothing to do with Bilbo and the dwarves’ quest to retake the mountain, that’s because it does. Except for living in the shadow of a dragon, Laketown was a normal town in the book with cheerful citizens. The Master was not some corrupt tyrant but an elected official with a weakness for gold who looked after the interests of his people.

During the escape from Thranduil’s halls, Killi was struck by a Morgul arrow and grows deathly ill. Despite this, Thorin wants to press on, so Killi is told to stay behind in Laketown. Along with him is his brother, Filli, Oin, the group’s physician, and Bofur, who overslept.

The idea of splitting the party would never have crossed the minds of the dwarves from the book. This is because of the heavy symbolism in the group: thirteen dwarves made fourteen thanks to their hobbit burglar to ward off an unlucky journey. Unfortunately, the decision to split the group was made so Tauriel could be the one to save Killi and Legolas could kill some more orcs who ambush the Laketown group.

In The Desolation of Smaug, the group spots a dwarven wind lance in Laketown. The elder dwarf, Balin, explains that they were anti-dragon weapons that could fire bolts called black arrows, the only thing strong enough to kill a dragon. As it happens, Bard keeps a black arrow in his house and is a descendant of Girion, the lord of Dale who injured Smaug during his initial conquest.

Nothing like this existed in the book, where Bard’s black arrow was a regular arrow forged by king Thror and passed down as a family heirloom. What’s more, despite the exposition, when Smaug attacks Laketown in Five Armies, the wind lance is destroyed. Bard ends up firing the black arrow from a broken longbow balanced on his son’s shoulder, making this another pointless deviation.

After Bilbo’s talk with Smaug, the dragon chased the hobbit and dwarves through the halls of Erebor. After finding the bodies of their kinsman, who couldn’t escape, Thorin proposes a plan to get Smaug to re-ignite the forges with his fire breath. Afterward, they lead him to the great hall and attempt to drown him in liquid gold.

This entire sequence was fabricated so that TheDesolation of Smaug could have a climax between Thorin and Smaug, who never interact in the book. This makes sense from a film perspective, but the execution stretches the suspension of disbelief. One minute Thorin is balanced carefully on Smaug’s mouth, next, he is riding a shield on a river of molten gold, yet neither he nor his company die or suffer first-degree burns.

As Bilbo engages in conversation with Smaug, he notices that there is a bare patch on the dragon’s underbelly right above his heart. A thrush overhears him explaining this weakness to the dwarves before flying to Laketown just as Smaug attacks. It relayed this info to Bard, who used it to kill the dragon.

Talking animals was something Jackson mentioned removing because he believed it would look too silly. However, Tolkien drew his inspiration from Germanic mythology, where talking animals are very prevalent and essential to the hero’s success. Instead, Bard happens to notice Smaug’s weak spot on his own, thus removing Bilbo’s small but vital role in ending the dragon.

Next: ‘The Hobbit an Unexpected Journey’ Is The Best Hobbit Movie And Why