Why Namor Looks So Different In The Black Panther 2 Trailer 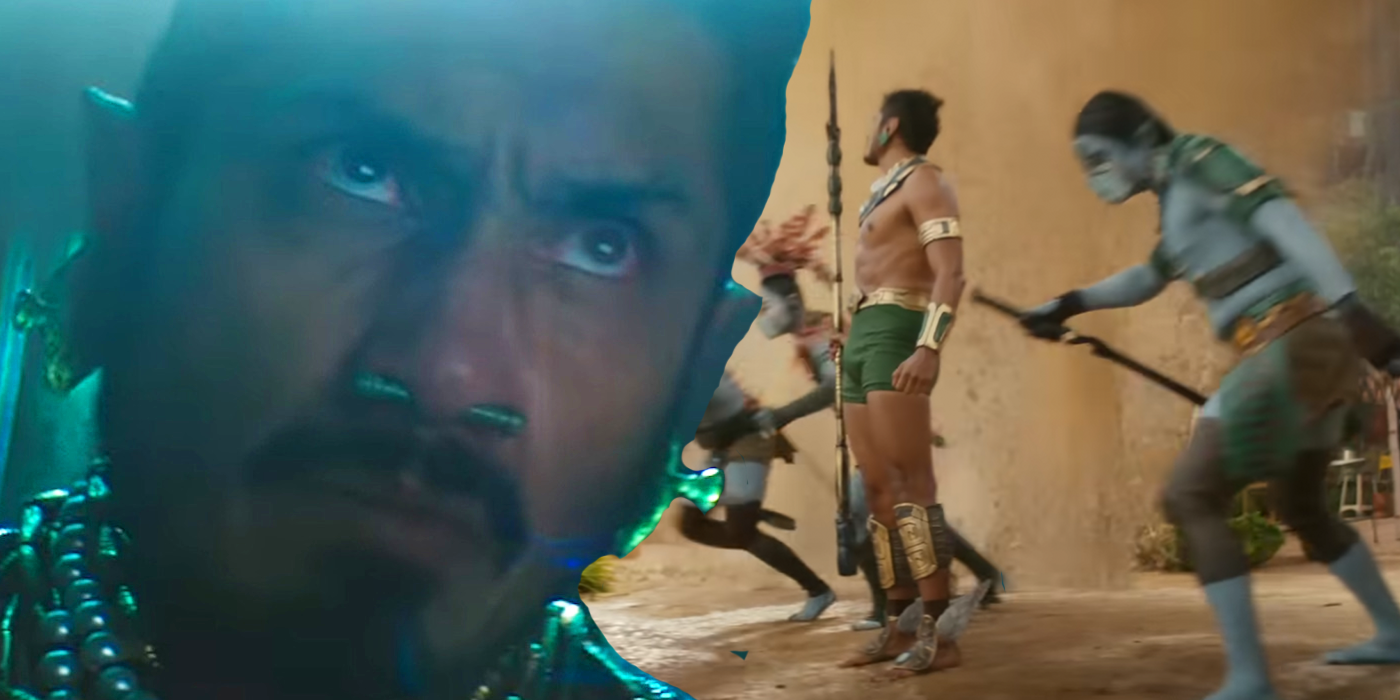 Black Panther: Wakanda Forever’s first trailer revealed a very different look for Namor than in the comics. Marvel was smart to change him-here’s why.

Marvel’s live-action panel at San Diego Comic-Con 2022 dropped the first trailer for Black Panther: Wakanda Forever, revealing that Namor‘s look is quite different than the comics–here’s why. The Black Panther: Wakanda Forever SDCC trailer had quite a lot happening. The kingdom of Wakanda is clearly in mourning after the loss of King T’Challa, with the teaser offering a lovely tribute, both to T’Challa and to his late actor, Chadwick Boseman.

However, Wakanda has a larger threat looming in the wake of its collective grief. The Wakanda Forever trailer also confirmed that the long-rumored kingdom of Atlantis, ruled by Namor the Sub-Mariner, would be involved. As longtime enemies of the nation of Wakanda, it’s unlikely the Atlanteans and Namor will let Wakanda remain in peace for long.

Something not accurate to the comics, however, is Namor’s redesigned look in Black Panther: Wakanda Forever. Leaked concept art circulated about a month ago showing off the new look for Namor, played by Tenoch Huerta, and the trailer confirmed its accuracy. Longtime comic book readers might be surprised to see how different Namor looks in the Black Panther 2 trailer, but there are a few good reasons he’s been redesigned.

Namor has had a few different looks in the comics over the years, but in his earliest incarnations, he wore little more than green and gold bikini bottoms. Since then, Namor’s look has evolved. These days, Namor wears quite a bit of black in the comics (and more clothing, in general, though he’s still considerably less clothed than other superheroes). His two best-known modern looks are a black and blue bodysuit with a tall collar and a gold belt, or black pants (sometimes with scales and sometimes with armored plating) topped with black shoulder armor and straps across his chest.

In Black Panther: Wakanda Forever, his look is considerably different. He sports two distinct styles. In terms of concealment, the first of Namor’s costumes is closer to the Silver Age Namor. He wears tight, green shorts with a golden belt, accentuated with golden armbands, wrist gauntlets, shin braces, ear decorations, and a golden collar. Interestingly, he also wears sandals with what appear to be wings. However, an earlier shot in the trailer showed an Atlantean baby with tiny wings on its feet, so it can be assumed Namor has winged feet as he does in the comics.

His second look appears to be more regal and ceremonial. Though both take inspiration from ancient Mayan culture, the ceremonial look is even further removed from the comics. This one embraces the Mayan design wholeheartedly, most notably in Namor’s giant headdress. It resembles one of the headdresses of traditional Mayan culture; however, instead of feathers, it seems to be some sort of sea kelp trailing from his headdress. The golden headdress is in the shape of some creature. While it looks like a jaguar, it very well could be a stylized depiction of a sea serpent. The golden collar and gauntlets he wears with this costume are more intricate in detail, and two pieces of material trail down from the collar in what appears to be a ceremonial cape of sorts.

There are a few good reasons for Marvel wanting to reinvent Namor for the live-action MCU. For starters, with Marvel’s Namor and DC’s Aquaman having such similar power sets and ocean settings, it’s important for Black Panther: Wakanda Forever to differentiate its version of a sea king from Jason Momoa’s in the DCEU. Simply upgrading his costume to look more modern and armored wouldn’t be enough. Beyond that, the traditional Mayan design of Namor’s costume and the rest of the Atlanteans fits far more neatly into the visual world Ryan Coogler has built for Wakanda with its blend of traditional African garb and high-tech weaponry.

But second and more importantly is that Black Panther: Wakanda Forever‘s reinvention of Namor continues Marvel’s increased commitment to diversity by incorporating underrepresented cultures into the MCU. In the comics, Namor’s culture is Atlantean, and though some readers argue he was originally Asian-coded in his looks, it’s never been confirmed. With Namor leading a fictional race of sea-dwellers, Marvel was free to play with the concept for the MCU. Instead of making him merely a generic “sea guy,” Marvel cast Mexican actor Tenoch Huerta in the role and tied Namor and the Atlanteans directly to Mayan culture. Reportedly, Huerta even learned the Mayan language for the role, further cementing its authenticity. In giving Namor a firmly real-world-based background, Black Panther: Wakanda Forever is smartly incorporating a fascinating culture with visual flair. From the first teaser trailer, it appears to be working.

Next: Why The MCU Is Completely Reinventing Namor

Alisha Grauso is a features editor at Screen Rant, as well as the editorial lead for Atom Insider with Atom Tickets. Previously, she was the editor-at-large and editor-in-chief for Movie Pilot. Her work can be found, or expertise cited, at Forbes, CNN, CBS, Variety, CNBC, Marvel, Business Insider, Birth.Movies.Death, Film School Rejects, and more. She’s also the co-leader of California Freelance Writers United, a grassroots organization advocating for smarter legislation and forward-thinking labor law for freelance writers in California and across the country.

Alisha has a Master of Arts in English from the University of Dallas and spent her years before jumping into entertainment journalism as an adjunct professor, a background that has come in handy in her editing roles. As a kid, her nose was always in a book or eyes glued to a screen, so it was inevitable she’d end up in two different worlds that are all about storytelling.

When she’s not working, you can find her on Twitter chirping about movies & TV, books, politics, ADHD, history, and sharing pictures of her cats @alishagrauso. Or you can contact her directly at alishag(at)screenrant(dot)com.