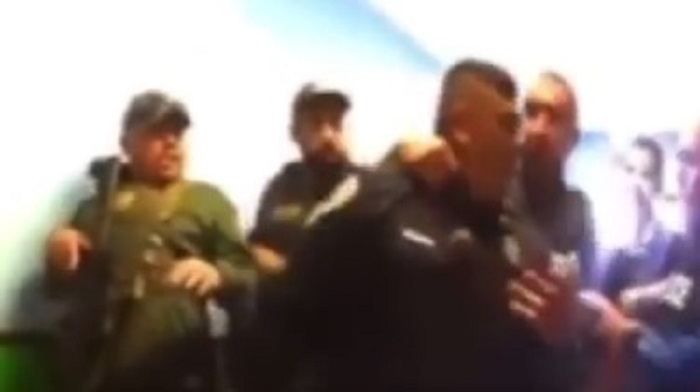 Yet another heartbreaking video has surfaced of the police response during the Uvalde massacre in May where a gunman shot and killed 19 children and two teachers.

The brief video shows the moment officer Ruben Ruiz makes a move toward the classroom where the suspect had well over an hour to carry out his attack while police did little to stop it.

Ruiz at that point knew that his wife, Eva Mireles, a fourth-grade teacher at Uvalde, was inside. She called Ruiz to let her know she was bleeding heavily and likely dying.

He begins to make his way through a crowd of fellow officers who were taking no action to stop the shooting themselves.

Another officer holds him back saying, “Hey, hey … Ruben, Ruben.”

“She said she’s shot, Tony,” Ruiz replies before he is pulled back by the same officer, turned in the opposite direction, and escorted away.

Mireles later died from her injuries.

Wow. This is the moment when police kept Uvalde officer Ruben Ruiz, gun in-hand, from storming the classroom where his wife had been shot. (Via @davenewworld_2)

RELATED: Officer Wanted To Save Teacher Wife From Uvalde Classroom But Was Detained And Had His Gun Taken Away

Ruben Ruiz was one of several police officers who were heavily criticized as surveillance video of the Uvalde shooting was made public.

Surveillance video obtained by the Austin American-Statesman earlier this month showed a scene in which heavily armed and heavily armored officers from multiple departments do little to stop the carnage that took place over a 77-minute span.

The evidence shows that even as the attack is carried out, officers find time for a fist bump and a moment to use hand sanitizer.

Would love to hear from this Uvalde cop why he was worried about putting on hand sanitizer while a shooter was massacring kids twenty feet down the hall pic.twitter.com/2F3oPqW3gp

Ruiz was among those criticized after the video was released as he was seen checking his phone while the shooter was just down the hall.

The rush to judgment appears unjustified, as it is now revealed he was maintaining contact with his wife. The criticism belongs with whoever opted to stop the one man who actually made a move toward the shooter with a gun in hand.

Many difficult moments in the Uvalde body cams, but this one is painful to watch as a husband.

UCISD ofc. Ruben Ruiz had got a call from his wife, teacher Eva Mireles saying she’d been shot.

He tried to go through the officers to get to her.

They pulled him back. #khou11 pic.twitter.com/S6NNfFCT3v

Had His Gun Taken Away

Earlier reports indicate police officer Ruben Ruiz was not only held back and escorted away as seen in the video but that he was disarmed as well.

DPS Director Col. Steven McCraw confirmed at the time that Ruiz was prevented from saving his wife.

“What happened to him, is he tried to move forward into the hallway,” McCraw said. “He was detained and they took his gun away from him and escorted him off the scene.”

Think about that for a minute. An officer wanting to save his own wife and likely the children in harm’s way had been detained and disarmed while the actual shooter was allowed to keep killing inside the classroom.

Fwiw this officer’s name is Ruben Ruiz. His wife was Eva Mirales, the teacher in the classroom who was shot and killed. She messaged him to tell him she was dying.

Shortly after this photo was captured, he had his gun taken and was detained. pic.twitter.com/xZ5Blipnsl

An investigative committee from the Texas House of Representatives released a report earlier this week showing “376 law enforcement officers” had rushed to the scene of the massacre but it took over an hour for the gunman to be “finally confronted and killed.”

Over a dozen students in the classroom were still alive during the timeframe that the police officers in the surveillance video inside the school dithered and others stopped parents from trying to save their kids outside.

Many of the victims were bleeding due to the wounds they suffered. Mireles died while being transported by ambulance to the hospital.

Even with Ruiz being led away from the scene there were still 375 law enforcement officers who could have done something to save lives. Anything.

10 Memes That Perfectly Sum Up Nick Fury As A Character