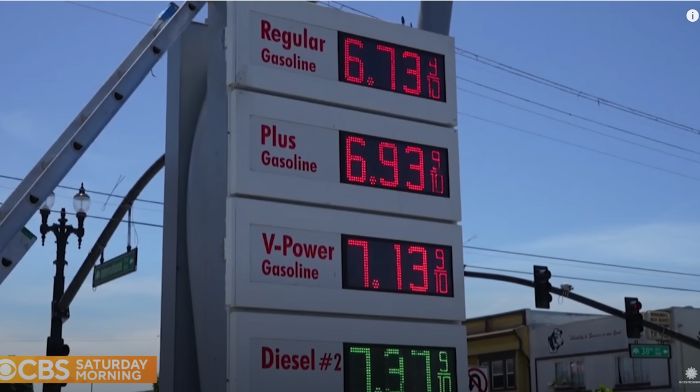 It is no secret that the mainstream media has become little more than the propaganda wing of the Democrat Party, an American version of Pravda. It’s part of why trust in the media is at an all-time low.

And whether they truly believe that a majority of Americans are on board with a radical climate agenda, or they know what’s coming in November so they have adopted a “what the hell let’s just go for it” mentality, they have decided that now is the time to act.

Therefore, the media has had an epiphany. The earth – like the planet – “wants” high gas prices.

Laying Out The Plan

That’s not a joke. This is a real headline from the Washington Post:

As of this writing, fact-checkers have not weighed in on whether or not the third rock from the sun became sentient and demanded that the President keep gas prices high.

Nevertheless, the Washington Post laid out the plan for “saving” the earth. It’s simple really, and they no longer feel the need to hide their agenda. All you have to do is keep gas prices artificially high, and you can essentially make people do whatever it is you want them to do:

“As any economist will tell him, the most efficient way to reduce fossil fuel consumption is to raise its price relative to alternatives, encouraging people and businesses to switch to cleaner sources and use less energy altogether.”

The Post then points out that, thankfully, the Russians “helped” the process along by invading Ukraine, sending gas prices upwards of $5 a gallon last month. All Joe Biden has to do is keep it from going back down. This is what the planet demanded in secret backroom meetings!

The Post acknowledges that, “Cutting back on driving is not easy. People must get to work and school. Not everybody can switch to public transit or buy a Tesla.” But sacrifice from the masses must happen.

REMINDER: You cannot buy into the lie of needing to “reduce carbon” and still stop the climate change death cult.

You’ve already given them the game. You buy into that lie, you’re a useful idiot. At best.

Which is The Best Way To Force People Into Complying?

There are several scenarios where the Washington Post sees Americans falling into line and obeying the new climate change rules. Incremental gas price increases as opposed to long-term hikes may force people to give up their SUV’s for an EV. But then say that, “On the other hand, rising wages would make consumers less and less sensitive to a one-time gas price hike.”

Perhaps the Post has not pierced the bubble in which they live to notice that, while wages might be rising, inflation is at 9.1% and climbing. The Post then points to the fact that high gas prices might lead to drilling, “not quite the desired outcome from a climate change perspective.”

But wait! Here’s an idea: just tax it even more! That would erode demand without consumers demanding more of it. Oh sure, the Post laments, continued high gas prices will take more hard-earned money from Americans, and then there is also the slowing of the economy that would happen.

Climate change economists have also come up with something called the “social cost of carbon.” It is a tax charged to individuals and businesses based on the amount of damages done to the environment by them through daily activity. But whatever, how much should we be willing to pay to SAVE the climate?

After all, the Post notes, “What’s important for the president to understand is we have no choice.”

Great to see the UN ask for a pool of journalists to report about Climate change, personally, I would have asked the YouTubers instead at least they would cover the truth, expect to be in CAMP 41, All costs covered!https://t.co/WWUL4Pdoxh

What Climate Alarmists Want Biden To Do

President Joe Biden on Wednesday did not declare the “climate emergency” that Democrats had hoped he would. Instead, he announced $2.3 billion going towards helping communities prepare for disasters, and helping low income people with their heating and cooling bills.

Biden also directed the Department of the Interior to recommend new wind areas in the Gulf of Mexico.

But the “transition” is just not happening fast enough for some. The Washington Post suggest Biden impose a “minimum gas price,” something along the lines of the minimum wage.

The most disturbing thing about all of this is that those who would impose these drastic measures don’t think for one minute that there will be any pushback from the American people.

Oh wait, they did. That’s easy too: just pay them. The best part, you are not really paying them. The Post explains it as giving people a rebate paid for by tax revenue.

No one is arguing that we should not be good stewards of the planet. But if those in power feel they have to coerce Americans into these policies, and not even feel the need to hide that fact, it should be crystal clear what is really going on.

Don’t Fall For These Money Scams – Diversifying with Delyanne Barros