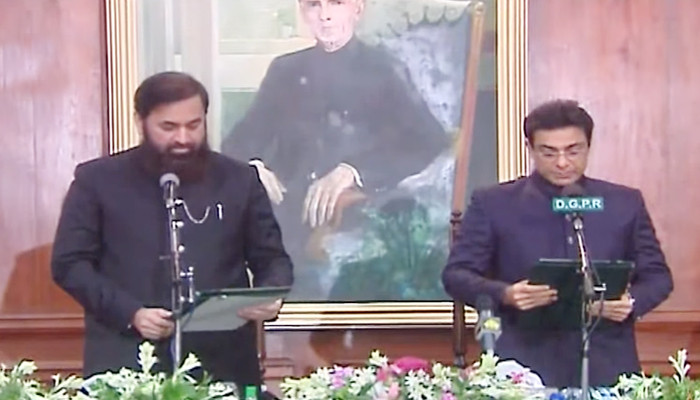 In a ceremony that took place at the Governor’s House, Governor Punjab Baligh Ur Rehman administered the oath to Hamza. The oath-taking ceremony took place at Governor House and was attended by PML-N leaders and other government officials.

Hamza, a day prior, retained the post of the Punjab chief minister as Deputy Speaker Dost Mazari, citing Article 63A of the Constitution, rejected 10 votes cast by PML-Q members.

As a result, Hamza received 179 votes, while Elahi, who was backed by the PTI, managed to bag 176 votes.

But Hamza’s fate still hangs in the balance as shortly after he was announced the winner in the run-off elections, PTI and PML-Q challenge the result in the Supreme Court.

Deputy Speaker Dost Mazari had rejected PML-Q votes after the party head Chaudhry Pervez Elahi had sent a letter to Mazari, saying that his lawmakers would not be voting for anyone.

The ruling has invited criticism from the legal wizards as several believe that Mazari’s decision was not in line with the Supreme Court’s order — that it issued in the Article 63(A) case.

Over 230 Economists Give Dire Warning About ‘Inflation Reduction Act,’ Say It Will Make Inflation Worse

Over 230 Economists Give Dire Warning About ‘Inflation Reduction Act,’ Say It Will Make Inflation Worse