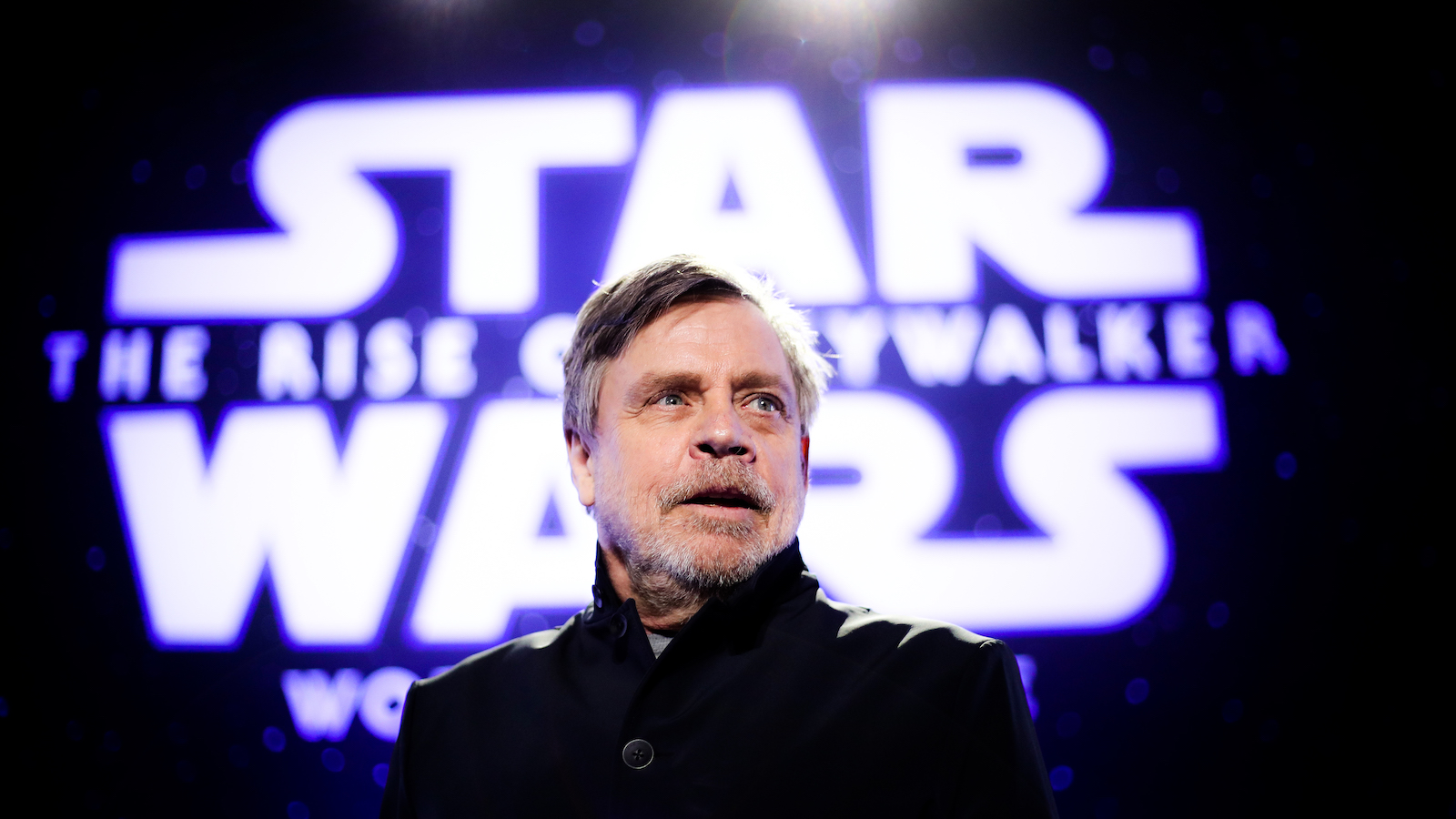 The now nearly forgotten Star Wars Radio Drama created by NPR (National Public Radio) effectively remade the original movie with numerous added elements that only a radio series can achieve. It was such a success that it increased NPR’s audience by 40 percent and gave what Star Wars fans at the time craved: more Star Wars.

With The Empire Strikes Back released a year earlier in 1980, fans were impatiently awaiting the release of Return of the Jedi, which wouldn’t hit theaters until 1983. At the time, there were no Star Wars shows on television and the only show of any kind that was Star Wars related was three years earlier with the cringe worthy Star Wars Holiday Special.

Thanks to NPR, that was all about to change.

Richard Toscan was working for NPR when they realized he had the talents to do something even bigger. So, they asked him to come up with an idea for a radio drama project that could attract a larger audience. Toscan knew that Star Wars would be perfect for NPR. George Lucas, who was a fan of NPR and radio drama, signed off on the project.

NPR needed a script that would basically be the equivalent of a nearly six-hour version of the original Star Wars film without it feeling drawn out. For such a task, they relied on novelist Brian Daley whose Han Solo trilogy had just been completed.

Next they nabbed Star Wars star Mark Hamill to reprise his role as Luke Skywalker, which gave the project immediate attention. They also got another Star Wars actor in Anthony Daniels to take part in the radio series. That was nearly as big as Hamill since much of the first half of the film comes from C-3PO’s perspective and he also has a very distinct voice.

The main cast of the radio play all do their characters justice, including Ann Sachs as Princess Leia, Perry King as Han Solo, and Keene Curtis as Grand Moff Tarkin. Bernard Behrens as Obi-Wan Kenobi delivers the best original line when he tells Luke: “Abuse of the force leads to the worst imaginable consequences”. Brock Peters, meanwhile, did a standout job replacing James Earl Jones as Darth Vader..

Hearing the galaxy far, far away

It’s the second episode when the series really takes off thanks to the introduction of both Princess Leia and Darth Vader, who engage in an interesting conversation. It ultimately segues into the third episode where Leia steals the Death Star plans, though we don’t get anything even close to the sequences in Rogue One.

Perry King blesses us with Han Solo’s presence in the sixth episode. We get to see, err….hear, where the droids go after they’re kicked out of Mos Eisley Cantina. In case you’re wondering, only one blaster is heard when Solo guns Greedo, so even in the NPR version Greedo never shot.

A great addition is the next episode when Solo heads to Docking Bay 94 and is greeted not by Jabba – as seen in the special edition of Episode IV – but by one of Jabba’s men. This intriguing character is named Heater and it’s a shame he only has one scene considering the strong voice acting of Joel Brooks. Heater gets Solo to quickly agree to pay Jabba back his money plus 25 percent interest. He warns Solo that if he doesn’t pay him soon: “Next time, I’ll hire Boba Fett himself.”

Did you ever wonder what actually happened when Darth Vader attempts to get the information of the whereabouts of the rebel base out of Princess Leia? What exactly does that floating needle do? Well, it becomes an intense interrogation scene in the radio drama that overwhelmed Ann Sachs while recording it. Afterwards, she was comforted by Brock Peters who had just slowly scared her into a near breakdown. Sachs recently told NPR that she still gets the shivers thinking about it today.

The full radio drama series is narrated by Ken Hiller who provides an intro and outro for each episode. The whole radio series is a treat for any Star Wars fan to listen to. It’s like experiencing the movie but with extended scenes, new scenes, some new minor characters, and everything that we’re already used to. Director of the series, John Madden, told NPR: “It’s like a movie to watch with your eyes closed.”

The response to the Star Wars radio series was overwhelmingly positive, with NPR receiving over 50,000 letters during its initial run.

The Empire talks back

The Star Wars radio series was such a success that NPR decided to do The Empire Strikes Back the following year. The series went to air on Valentine’s Day 1983, with the final episode of the Empire radio drama airing exactly one month before Return of the Jedi premiered in theaters.

Empire is arguably an even better radio drama than its predecessor. The main cast returned, including Mark Hamill and Anthony Daniels. Billy Dee Williams reprised his role as Lando Calrissian and John Lithgow is outstanding as Yoda.

With this four-hour version of The Empire Strikes Back, told in 10 episodes, fans were again treated to scenes that they didn’t get to experience in the film. For instance, on Bespin, when Lando leads Han Solo directly to a waiting Darth Vader, what happens behind those closed doors? In this series, it becomes a scene where Vader threatens to kill Chewbacca in order to get Solo to agree to submit to what will be carbon freezing.

Boba Fett has some more lines than in the movie, though that’s not saying much. Also, that infamous Luke and Leia kiss lasts about 15 seconds (yuck!).

A return to the series

Unfortunately, NPR wasn’t able to make Return of the Jedi for a variety of reasons but Highbridge Audio, the company that distributed the cassettes and cd’s, completed the trilogy in 1996.

Anthony Daniels was back, as were Perry King, Ann Sachs, John Lithgow, Brock Peters, and Bernard Behrens. Also, Paul Hecht does a solid job as the Emperor and Jabba the Hutt is played by none other than Ed Asner. Unfortunately, they were unable to secure Mark Hamill and Billy Dee Williams, which is major blow to this final leg of this series. Their replacements, Arye Gross as Lando and Joshua Fardon as Luke, do extremely well and it prevents what you think would certainly be a let down for obvious reasons.

With just six episodes Return of the Jedi is by far the shortest of the three radio dramas, clocking in at just over three hours. Despite it’s challenges, this version of Jedi is enjoyable and anyone who listens to the first two Star Wars radio series will no doubt want to listen to this one just to wrap it up.

The Return of the Jedi radio series begins with Luke completing the construction of his new lightsaber, based on a scene that was originally cut from the film.

In his final sequence Boba Fett, voiced by Alan Rosenberg, tries to subdue Luke during the Battle of Carkoon, telling him: “Drop the lighsaber, farmboy!”. This prompts Luke to hilariously and uncharacteristically reply: “Don’t call me farmboy!”

Boba’s last sentence before he falls into the sarlacc is actually directed towards Luke, as the Jedi tries to escape from Boba’s capture: “You won’t be a prisoner, you’ll be a corpse.” Ironically, Boba then became a corpse only to be saved in canon for the Disney Plus series where he escapes the sarlacc then becomes a prisoner.

Maybe the best line is the very last of the series when Luke Skywalker says: “The Jedi have returned.”

The timing of the production and release of this Return of the Jedi radio drama is worthy of note since production began on Phantom Menace and filming would start just a year later.

John Madden, who directed all three of the radio dramas, went on to direct the major motion picture Shakespeare in Love in 1998 which won the Oscar for Best Picture.

Mark Hamill was new to voice work but it was a sign of things to come, as he would go one to critical acclaim as the voice of the Joker in numerous Batman animated shows and films over the course of two decades.

Overall, the radio series is an excellent addition to the ever growing Star Wars universe. It gifted Star Wars fans with some of the original actors but also allows them to appreciate the familiar story with some new ones. The force is strong with this radio drama series and if you are a Star Wars fan, do yourself a favour and check it out, farmboy.