HomeVideo6 Things That Proved Lorelai Should Have Stayed With Jason (& 6...
Video 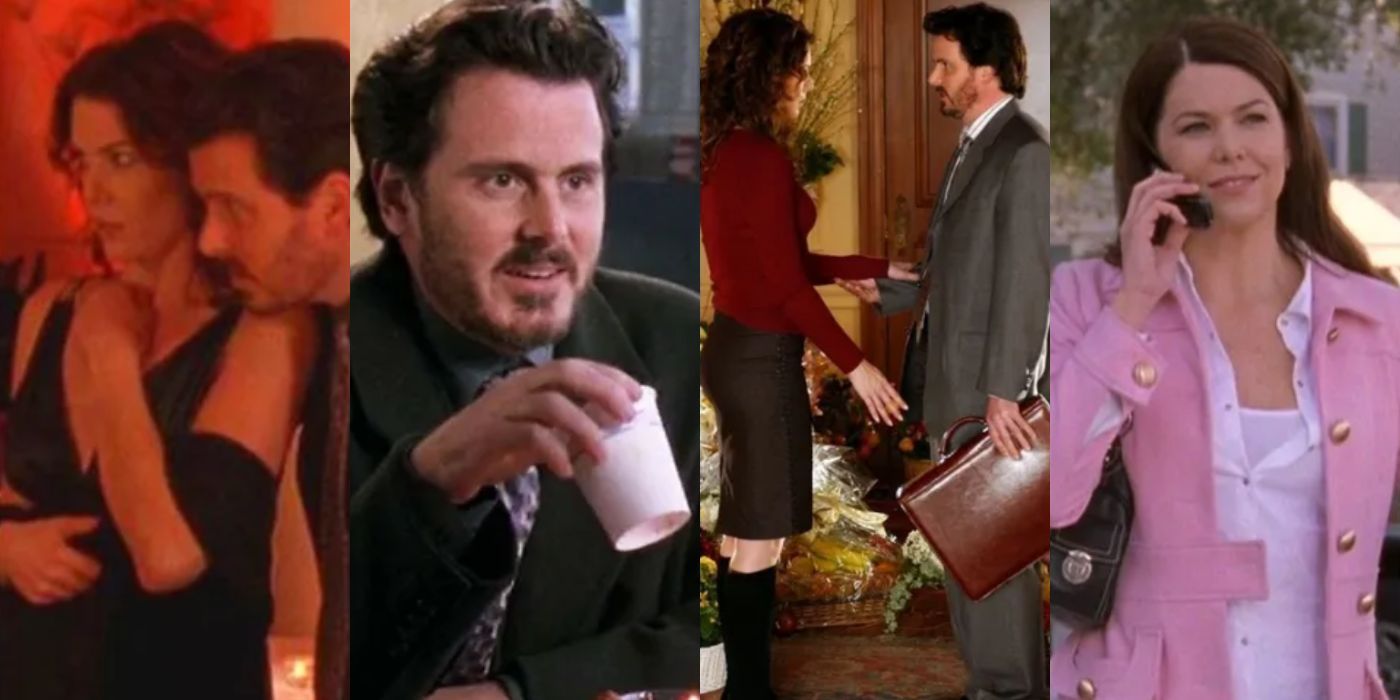 Before Lorelai Gilmore started a whirlwind romance with Luke Danes on Gilmore Girls, she was in a brief romance with her childhood friend, Jason Stiles. The two met at summer camp when they were younger and rekindled their romance after running into each other again through her parents decades later.

The close relationship Jason had with Richard and Emily Gilmore made things tricky—but not impossible—between Lorelai and Jason. The two eventually broke up when the relationship between the Gilmores and Jason became too toxic. However, some fans believe that Jason was “the one who got away” and Lorelai’s truest partner. But would the two make it through tough times?

Updated on July 22nd, 2022, by Lynn Gibbs: Although Lorelai and Luke were the couple fans were rooting for by the end of Gilmore Girls, she had a handful of suitors that could have taken Luke’s place. Christopher was never meant to be the person Lorelai ended up with forever, but Jason Stiles was a great possibility. Like Christopher, they came from similar backgrounds and had relatable personalities. However, was Jason anything more than a fling while Lorelai focused on creating the Dragonfly Inn? While they didn’t work out in the end, some fans felt like Jason and Lorelai were meant to be.

They Should Have Stayed Together

Jason and Lorelai are the outlaws of their own families. Lorelai never lived up to her family’s high expectations of her. She didn’t go to an Ivy League school, she had a baby out of wedlock, and she moved out when she was a teenager. Even as an adult, Lorelai still feels like the black sheep of the family.

RELATED: 5 Gilmore Girls Characters Who Had No Impact (& 5 Who Had Too Much Influence)

Jason, on the other hand, started on the right path with his family before going his own way. He became a Harvard graduate and started working for his father’s company. He eventually left his father’s company to work for the “enemy” — Richard. Together, it was Lorelai and Jason against the world. They made an impact on each other’s lives.

As similar as Lorelai and Jason were, they were different enough to push each other out of their comfort zones. Jason was a particular man who had slight control issues, but Lorelai was the same. Their first date proved this when Jason preferred a quiet, reserved dining room while Lorelai wanted to eat where the magic was happening.

Emily Would Have Come Around To Jason

If Richard and Jason didn’t have a bad fallout, Richard and Emily would have come around to the idea of Lorelai and Jason being together. Emily and Richard despised Jason after Richard was forced out of his company. However, it was Emily who wanted to give Jason a second chance. This was one of Emily’s best pieces of advice.

She’s the one who forced Richard to take a meeting with him to see what he wanted. It was also Emily who made Lorelai and Jason “pretend” to be each other’s dates at a black-tie event. She loathed Jason at first, but she would have come around to the idea. There were worse people Lorelai could have been with in Emily’s eyes.

They Would Have Encouraged Each Other’s Careers

In one episode of Gilmore Girls, Lorelai and Jason are spending time together but aren’t spending quality time together. They’re both on their phones the whole time talking to clients and construction workers. Jason was trying to get his business with Richard off the ground, and Lorelai was doing construction on the Dragonfly Inn.

Lorelai even called them an “all business corporate couple.” Seeing how strong both of their work ethics were, these two could have inspired each other to do better. Aside from Luke, he was one of Lorelai’s better boyfriends because he inspired her to grow.

He Was A Challenge

Jason and Lorelai were more alike than people realized. Like Lorelai, Jason was also quirky, spoke fast, and understood her odd references. It was like they were speaking a language only they knew. It was his quirks that Lorelai found intriguing because she also had them.

She & Rory Would Have Been Taken Care Of

Lorelai is a smart businesswoman and follows her gut. However, like many other people, Lorelai often found herself strapped for cash. As a single mother with pride, she hated asking for money when she was in need, but she would do it as a last resort. In many instances, Lorelai and Rory were saved by money and privilege.

If she ended up with Jason, he was wealthy and successful enough to be relied on. If Lorelai ever needed a loan for the Dragonfly or Rory, she could have easily gone to Jason instead of going to her parents or Luke.

They Never Would Have Worked

Jason and Lorelai could have been something great but Lorelai knew they would never work. After Richard went behind Jason’s back and started working with Jason’s father (leaving Jason out to dry), Jason had no choice but to sue Richard. As wise as Richard Gilmore was, this was one of his lowest moves.

Lorelai was already on her parents’ naughty list for life. If she was dating the man who sued her parents, things would have gotten worse for her. She had no choice but to end the relationship or her Friday night dinners would have been worse than they already were

How Would Jason And Rory Get Along?

While Jason and Rory were friendly with each other, there’s no telling what would have happened in the long term. As fans see with her conversations with Christopher and Luke, Lorelai was satisfied with Rory being her only child.

If Jason and Lorelai got more serious, would he want more children? And how would he react if Lorelai didn’t? It’s also hard to tell if Rory would have been okay with Jason as a stepdad or father figure in her life.

They Weren’t Able To Have The Intimacy Lorelai Wanted

When Lorelai and Jason first sleep together at his house, he warns her that he can be a little quirky in his own space. He’s a light sleeper who can’t sleep with other people. It doesn’t work for him. The only way Lorelai could spend the night at his house is if she slept in the guest bedroom.

Jason did make the guest bedroom extraordinary for cases like these, but Lorelai is the kind of woman who enjoys intimacy and cuddling. There’s no way she would be okay with getting kicked out of bed every night to sleep alone.

Was She Only With Him For This Reason?

Was Lorelai subconsciously with Jason to annoy her parents? To protect her relationship with him, she didn’t tell her parents they were dating but it’s the secrecy of it all that Lorelai may have liked.

She enjoyed dating a man no one knew about it. It was just them in their little world and they had to pretend not to be friendly when they were in crowds. It was the game of the relationship that Lorelai liked most. As soon as people found out about Jason, things got messy and Lorelai ran away. This is one of Lorelai’s worst traits because she never confronts relationships head-on.

He’s Everything She Didn’t Want

Jason was wealthy, handsome, and worked with her parents. He grew up in the same lifestyle as Lorelai and knew a lot of the same heavy hitters. He was a Harvard graduate and a wealthy man.

But do all of those traits sound like someone Lorelai would love? As amazing as Jason was, he’s also everything Lorelai was trying to escape from when she left her parents. He may as well be another Christopher, which historically never ended well.

Would Jason Move To Stars Hollow?

Jason is a fast-paced businessman who, presumably, enjoyed living close to the city because of business. Lorelai, on the other hand, loved Stars Hollow and never wanted to leave.

Stars Hollow was more than a town to her; it was home. It was a place where everyone knew and loved each other. She would have never left Stars Hollow for Jason. Likewise, it’s hard to imagine Jason living in Stars Hollow and liking it. The ins and outs and details of Stars Hollow wouldn’t have worked for a private man like Jason.

NEXT: 10 Details In Stars Hollow You Never Noticed On Gilmore Girls

Lynn is a nomad who travels the globe on the hunt for her next adventure with her husband. A lover of being outside (and finding the best latte in town), Lynn is typically hiking, walking, or jogging when she’s not focusing on her love of writing. When it comes to shows streaming on Netflix or anything Bravo-related, Lynn’s your gal. She loves rewatching reality TV shows like The Real Housewives and Southern Charm, but she adores watching sitcoms like The Office, The Big Bang Theory, and Parks and Recreation. Lynn has been writing for ScreenRant for the past seven years and has loved writing about her knowledge of all things pop culture and TV.