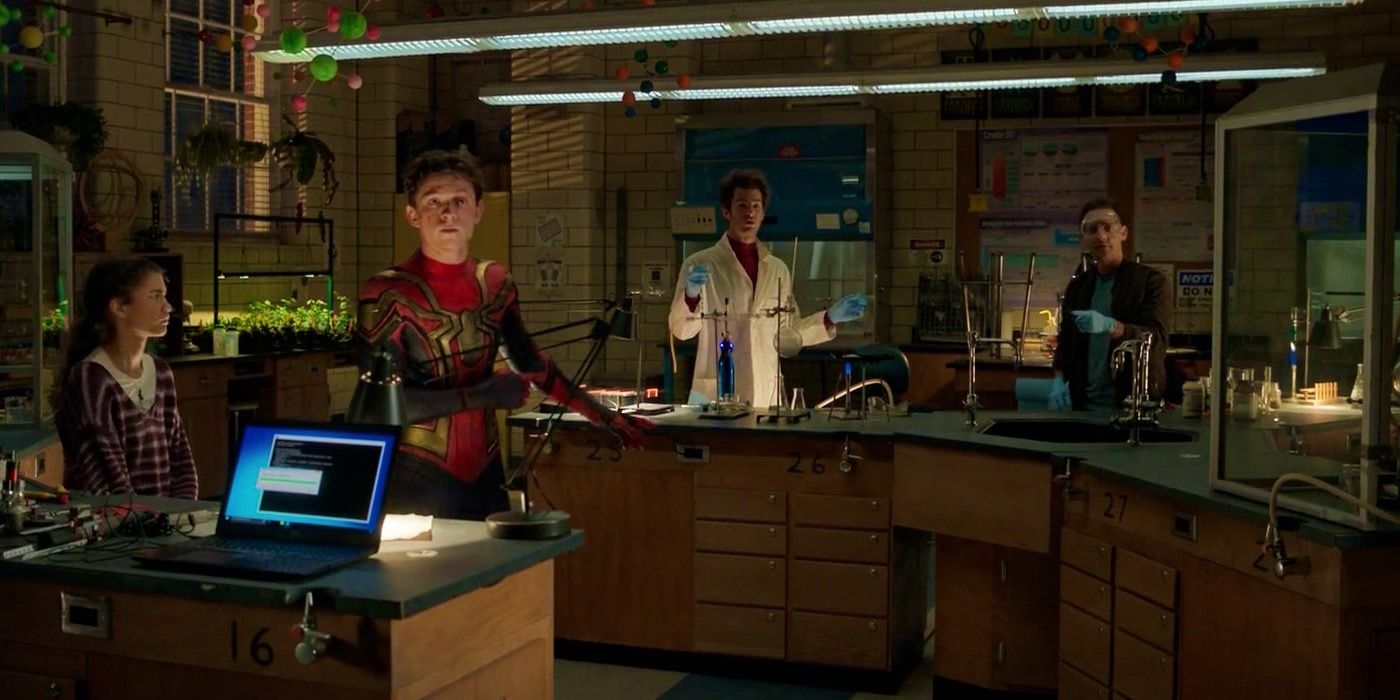 Spider-Man: No Way Home recreated the classic pointing Spider-Man meme not once, but twice – here’s where to spot to movie’s meme references.

Here’s how Spider-Man: No Way Home recreated the classic pointing Spider-Man meme not once, but twice. In the lead-up to the much-anticipated release of Spider-Man: No Way Home, rumors were flying around that former Spider-Man movie actors Andrew Garfield and Tobey Maguire were both set to appear in the sequel. Despite the cast and crew adamantly dismissing those rumors as fake, they soon turned out to be true. While Garfield and Maguire’s roles might’ve been Hollywood’s worst-kept secret, the actor’s appearance and recreation of the infamous meme were worth the prolonged teasing from Disney and Sony.

Spider-Man: No Way Home follows Spider-Man after he enlists Doctor Strange to cast a spell to make the world forget his civilian identity, Peter Parker. Unfortunately, the spell inadvertently unleashes the multiverse and several supervillains along with it which results in Peter losing a loved one at the hands of Willem Dafoe’s Green Goblin. After this, Peter flees and his friends try to summon him via a portal but end up summoning the Peter Parkers from Marc Webb’s The Amazing Spider-Man films (AKA Andrew Garfield) and Tobey Maguire from Sam Raimi’s Spider-Man trilogy and they eventually team up with Holland’s Peter to save the day.

The powers that be at Marvel and Sony might not have been able to keep Garfield and Maguire’s roles totally under wraps, but they did surprise audiences by recreating the iconic pointing Spider-Man meme during the movie. For those not familiar with the meme in question, it’s based on a scene from an episode of the 1967 Spider-Man cartoon titled “Double Identity” in which the real Spidey comes face-to-face with a villain impersonating him. In meme culture, it’s used to describe a situation in which very similar people meet and Spider-Man: No Way Home employed the meme perfectly not once, but twice during the story.

Where No Way Home Featured The Spider-Man Pointing Meme

The first time Spider-Man: No Way Home referenced the pointing Spider-Man meme came when the three Peter Parkers retreated to a laboratory to try and find a way to heal the No Way Home supervillains unleashed during Doctor Strange’s spell-gone-wrong. The second nod to the meme was during the trio’s final battle atop the Statue of Liberty. Twitter user Shahir Hameed captured the moments in a tweet which can be viewed above.

In case anybody missed those subtle easter eggs in Spider-Man: No Way Home, the meme was recreated once again by Holland, Garfield, and Maguire in a picture of the actors pointing at each other that was shared via the movie’s social channels to announce its home media release. The Spider-Man pointing meme isn’t the only meme that Spider-Man: No Way Home referenced either. Diehard fans of the web-slinging wonder boy may have noticed Willem Dafoe’s Norman Osborn/Green Goblin character utters the line “I’m something of a scientist myself” during the movie which is both a reference to his memorable quote from Sam Raimi’s 2002 Spider-Man movie and the popular meme it spawned.

As good as Spider-Man: No Way Home is, no movie is immune from criticism, and a consistent accusation leveraged at No Way Home is that its homages to memes like Pointing Spider-Man are pure fan service. They are – but that’s not a negative. Attacking Spider-Man: No Way Home for fan service is an angle taken by critics and commentators who didn’t really understand the point of the movie. No Way Home never tried to hide the fact it was a love letter to the last two decades of Spider-Man in cinema, but it still put to use an intricate and rewarding plot and contained performances that made it arguably the best movie so far in the MCU’s divisive Phase 4. At its core, though, it’s still a movie that exists for Spider-Man fans before anyone else.

Related: All 9 Spider-Man Movies Ranked (Including No Way Home)

Next: Maguire, Garfield, Or Holland: Which Spider-Man Is The Smartest?

Helen Armitage is a freelance writer based in the UK who has been writing online since late 2013. She’s produced content for the likes of Culture Trip, WhatCulture and Prague.TV and started writing for Screen Rant in 2019 – firstly as a news writer before progressing onto writing mini-features. Helen is a lifelong fan of the horror genre which started in the 1980s when films like Gremlins and Cat’s Eye scared the life out of her as a kid. If she had to pick a favorite horror movie it would probably be The Shining but Ari Aster’s Hereditary and Midsommar rank in joint second place. Helen loves a good movie musical too and has probably watched The Rocky Horror Picture Show, Hedwig And The Angry Inch, The Blues Brothers and Little Shop Of Horrors more times than is healthy. She’s obsessed with dogs too so any films from the “sad dog movie” genre (Homeward Bound, Marley & Me, etc) make her ugly cry big time … but she’s still a cold-hearted horror movie fan, ok?