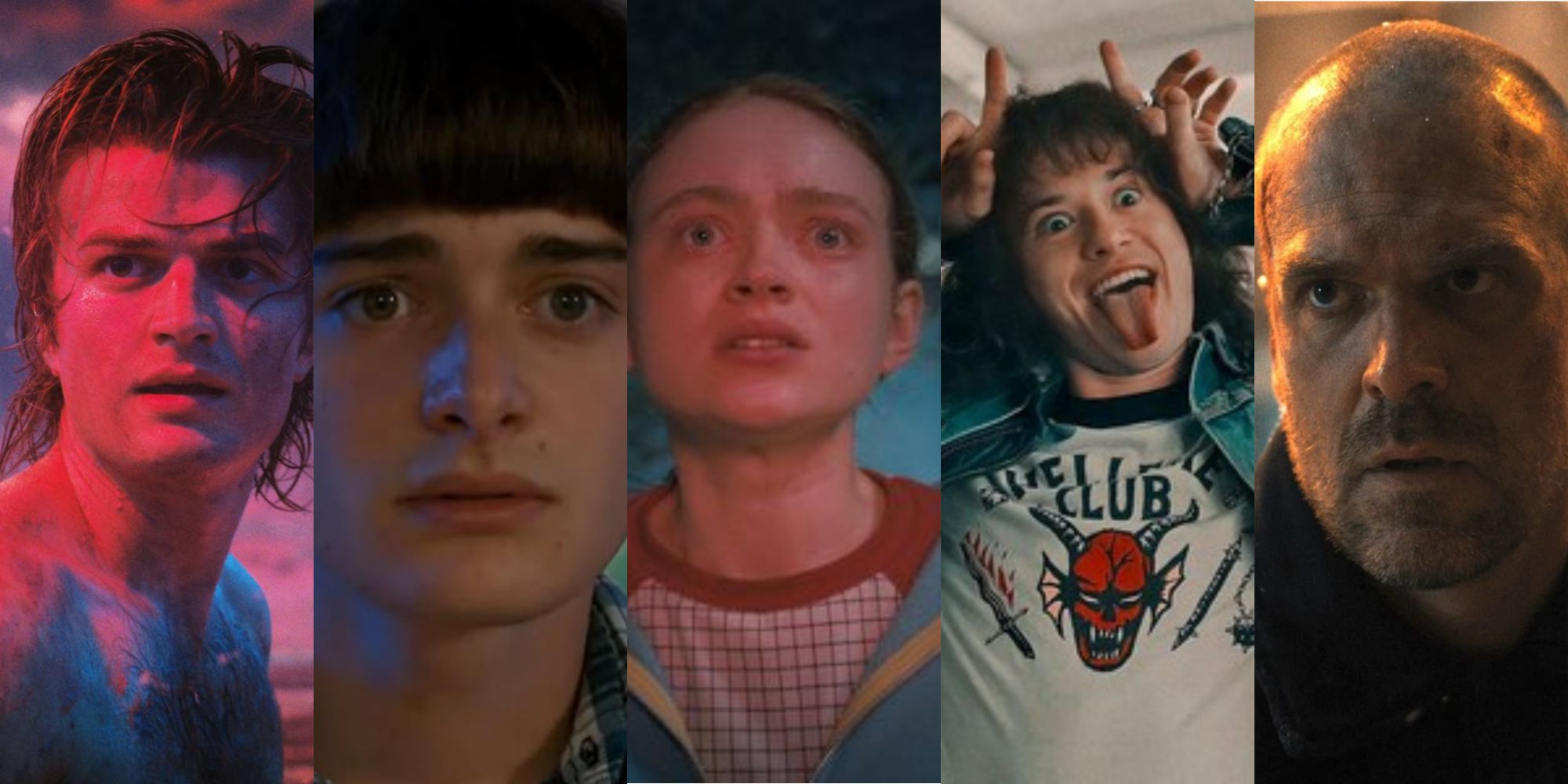 Season 4 of Stranger Things brought together some of the most dynamic and unique storylines the series has ever seen. When the season began, the friends were separated into two groups, and it was discovered that Jim Hopper (David Harbour) was still alive in Russia. With so much separation between the main characters, it is no surprise that different kinds of storylines and relationships were established, while still trying to make sure that everyone involved was connected.

Even if the separation between the characters in the show made it harder to have storylines between characters that are usually directly connected, it allowed the show to explore new angles, and establish more depth to the overall group dynamic. By introducing new characters and different narratives, season four enhanced the overall story of the series, and these storylines in particular were the most impactful and interesting ones in the most recent season.

The end of season three gave everyone the impression that Hopper died until it was teased that he had managed to survive somehow. What this meant, however, was that Hopper was going to be all by himself, making it necessary for him to establish a relationship with new characters. They still keep Hopper connected to Hawkins by having him send a message to Joyce Byers (Winona Ryder) who, upon discovering Hopper was alive, immediately decides to go to Russia to rescue him with Murray Bauman (Brett Gelman).

This storyline demonstrated the extent Joyce is willing to go in order to save Hopper, while also showing how dedicated Murray was to the group. The most significant occurrence was seeing Hopper and Joyce finally come together and express their true feelings for each other. The Russian side of this storyline then provided some of the best action with Hopper having to fight more monsters from the Upside Down, this time with a new and unexpected ally in Enzo (Tom Wlaschiha). Enzo ends up being a formidable ally for Hopper directly contributing to his escape while trying to make sure that Yurri (Nikola Duricko) did not betray them again and foil their plans to reunite with their children.

Eddie Munson (Joseph Quinn) has immediately become a fan favorite because of the nature of his heroic and tragic death at the end of the season, but the impact that was felt upon his death is large because of the relationship he established with Dustin Henderson (Gaten Matarazzo). Throughout the entire season, Eddie was a tragic figure forced on the run for a crime he did not commit based on assumed stereotypes that followed him around because of his eccentric nature. Dustin, however, knew how ridiculous those stereotypes were and understood what a caring and innocent person Eddie was.

It was Dustin’s belief in Eddie that gave him the inspiration he needed to finally be the hero in the end. Eddie saw how pure and genuine Dustin was and that helped motivate him to go back out and confront the bats head-on, ultimately leading to his death. Both Eddie and Dustin saw each other for who they really were and genuinely cared for one other without any ulterior motives. Their storyline ultimately ends with Dustin being the one to talk to Eddie’s uncle, giving him a sense of closure and making sure that at least one other person in Hawkins understood that Eddie was a hero in this story, instead of the satanic villain that he was painted to be.

Romantic troubles between Nancy Wheeler (Natalia Dyer) and Johnathan Byers (Charlie Heaton) are something that most people could have anticipated when they found out that they were going to be separated at the end of the previous season. At the beginning of this season, however, it became clear that it may have been worse than people anticipated. With the issue of which college they would be going to, and how much of a priority it was going to be in their life, it was easy to see that Nancy and Johnathan were going in different directions. Ultimately, it is revealed that Johnathan was deliberately putting things off to try and ease away from the relationship with the understanding that he needed to prioritize his mother and brother, preventing him from giving Nancy what she deserved.

RELATED: 5 Reasons Why Season 4 Is the Best ‘Stranger Things’ Season Yet

Things get even more interesting when it becomes clear that there still is real chemistry between Nancy and Steve Harrington (Joe Keery). With the reluctance in Nancy and Johnathan’s relationship along with Steve’s inability to find any girl he can settle down with, the two are naturally drawn together because of their history. Even though nothing ends up happening between Nancy and Steve, it is clear that there is never going to be a simple decision for Nancy and it will be impossible to solve this love triangle without someone being hurt and left behind. These relationships are the most dynamic and complicated ones we have seen thought the entire season and set things up in a way that will make sure it is a crucial part of the next season.

At the beginning of the season, it appeared as though Lucas Sinclair (Caleb McLaughlin) was flourishing more than anyone else on the basketball team, while Max Mayfield (Sadie Sink) was struggling more than anyone else because of the death of her brother Billy. The distance between the two of them had never been greater and it appeared as though Max did not want to have anything to do with Lucas. While this was troubling Lucas, his new status on the basketball team was a bigger priority, making it impossible for the two of them to reconcile. Once Lucas began to discover what was going on, while learning about the nature of the players on his basketball team, all of his focus shifted to Max, and he made her a bigger priority than anyone else in the show.

Lucas became the one that always maintained Max’s well-being as the number one priority, particularly with the plan to use her as bait with Vecna (Jamie Campbell Bower). Eventually, Max was able to appreciate the effort Lucas was making despite the fact that she was being held back by Vecna’s curse. The two of them were able to share one of the more beautiful moments when Max explains how he was a part of her happiest memory. Lucas’ culminating fight then becomes one of the most emotional in the show, demonstrating to everyone that they always had feelings for each other, no matter how much distance was between them at certain points.

The relationship between Mike Wheeler (Finn Wolfhard) and Will Byers (Noah Schnapp) immediately had tension when Mike came to visit them. Even though Will never wanted to be upset over the amount of attention Mike was giving Eleven (Millie Bobby Brown), he could not help but feel he and Mike lost part of their connection that was so strong in earlier seasons. Will was then put in an even more difficult situation when he realized that Eleven had been lying to Mike about how well she was doing. Will was then thrust in the middle of Eleven and Mike’s troubles, which were clearly going to be made a priority over the anxieties he was feeling over his relationship with Mike.

After realizing how troubled Mike was by the tension between him and Eleven, Will shifted focus and made that his priority. Will did everything he could to help Mike preserve the special relationship he had with Eleven, even after she was taken away following what Mike described as their first real fight. Will then played his biggest role by reminding Mike that he was the heart of the group and Eleven needed him as much as he needed her. Will was able to fix the imbalance in the relationship between Eleven and Mike. Even though Will and Mike were back working together on great terms, it still did not feel the same for Will. That is when his brother Johnathan came in and reminded Will that he still had someone in his life he could talk to and trust. The initial tension between Will and Mike ultimately led to the rekindling of Eleven and Mike’s relationship, as well as Will and Johnathan’s relationship.

Keep Reading: 10 Storylines that Season 5 Needs to Wrap Up